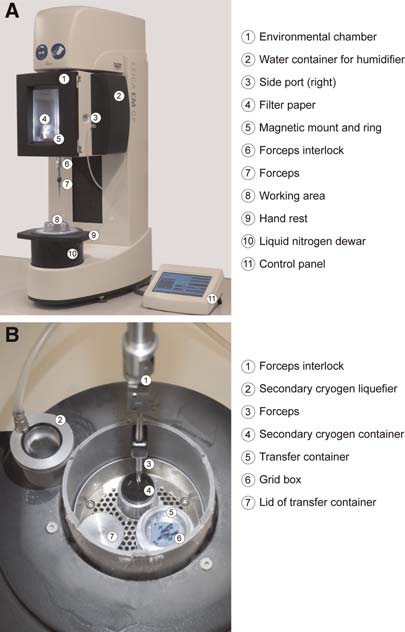 Another instrument, the Cp3, is being produced by Gatan (http://www.gatan.com/). This device's environmental chamber allows humidiﬁcation via a sponge and monitoring of humidity and tempera-ture via a sensor. The blotting mechanism is pneumatic and can be used either single- or double-sided.
A temperature control of the secondary cryogen avoids freezing.
In 2009, Leica Microsystems (http://www.leica-microsystems.com) launched a new immersion freezer developed in close collaboration with our lab, the Leica EM GP ("grid plunger") (Fig. 1). BothImmersion Freezing of Suspended Particles and Cells for Cryo-Electron Microscopy (Resch et al.
2011a) and Immersion Freezing of Cell Monolayers for Cryo-Electron Tomography (Resch et al.
2011b) are tailored for the EM GP; its key features and the steps involved in a freezing cycle are brieﬂyintroduced here. In addition to standard components like an environmental chamber (+4 to +60˚C, up to 99% relative humidity) that lowers onto the LN2 dewar before plunging, an easy-to-use computerinterface operated via a touch screen (Fig. 2), and a controlled secondary cryogen heating, the GP incor-porates a number of innovations.
A notable difference compared with the other semiautomatic immersion freezers available is that the GP primarily uses single-sided blotting. As this is the way most microscopists blot manually, experi-ence obtained from manual blotting can be easily transferred to the GP. Furthermore, unilateral blottingfrom the "back" side of the grid is the preferred way to prepare frozen hydrated cell monolayers. If speci-mens require blotting from both sides, the grids can be rotated 180˚ to be blotted from both sides consecutively. The instrument uses a blotting sensor to measure the point of contact between specimenand ﬁlter paper (Lihl and Resch 2010) to exert comparable pressure on each grid to be blotted. Even withbent grids or ﬁlter paper that is strongly bent due to high humidity, very reproducible results canbe obtained.
The GP implements a number of measures to prevent contamination of the specimen by atmos- pheric humidity. This includes balanced pressures between the environmental chamber and theworking area, as well as a constant ﬂow of GN2 to keep humidity out of the critical working area. Theelaborate anticontamination system makes it possible to freeze many grids in a row (at least 20)without accumulating too much ice, even without reﬁlling the LN2 in the main dewar. It might be a Cold Spring Harbor Protocols FIGURE 1. (A) Overview of the main unit without the (optional)viewing system mounted. The environmental chamber is inthe lifted position to load the quick-lock forceps. For freezing,it is lowered directly onto the working area. (B) Close-up viewof the working area with a forceps in freezing position. Notethe lack of contamination inside the working area, while theoutside is already frosted with ice after some time.
Cold Spring Harbor Protocols

This page intentionally left blank Laurie Rozakis, Ph.D. The State University of New York Farmingdale State College New York Chicago San Francisco Lisbon London Madrid Mexico City Milan New Delhi San Juan Seoul Singapore Sydney Toronto Copyright © 2007, 1999 by The McGraw-Hill Companies, Inc. All rights reserved. Manufacturedin the United States of America. Except as permitted under the United States Copyright Act of1976, no part of this publication may be reproduced or distributed in any form or by any means,or stored in a database or retrieval system, without the prior written permission of the publisher.

Novartis: it's an uphill climb to the bottom

Healthcare European Pharmaceuticals Novartis It's an uphill climb to the bottom from Equal Weight Earnings and execution headaches: With the sector at a 30% premium to the EU market (1yr fwd PE) earnings and execution uncertainties are not en vogue, which is why we now rate Novartis a relative UW (was EW). The company's top-line growth is >50% dependent on two launch products (Entresto in heart failure and Cosentyx in