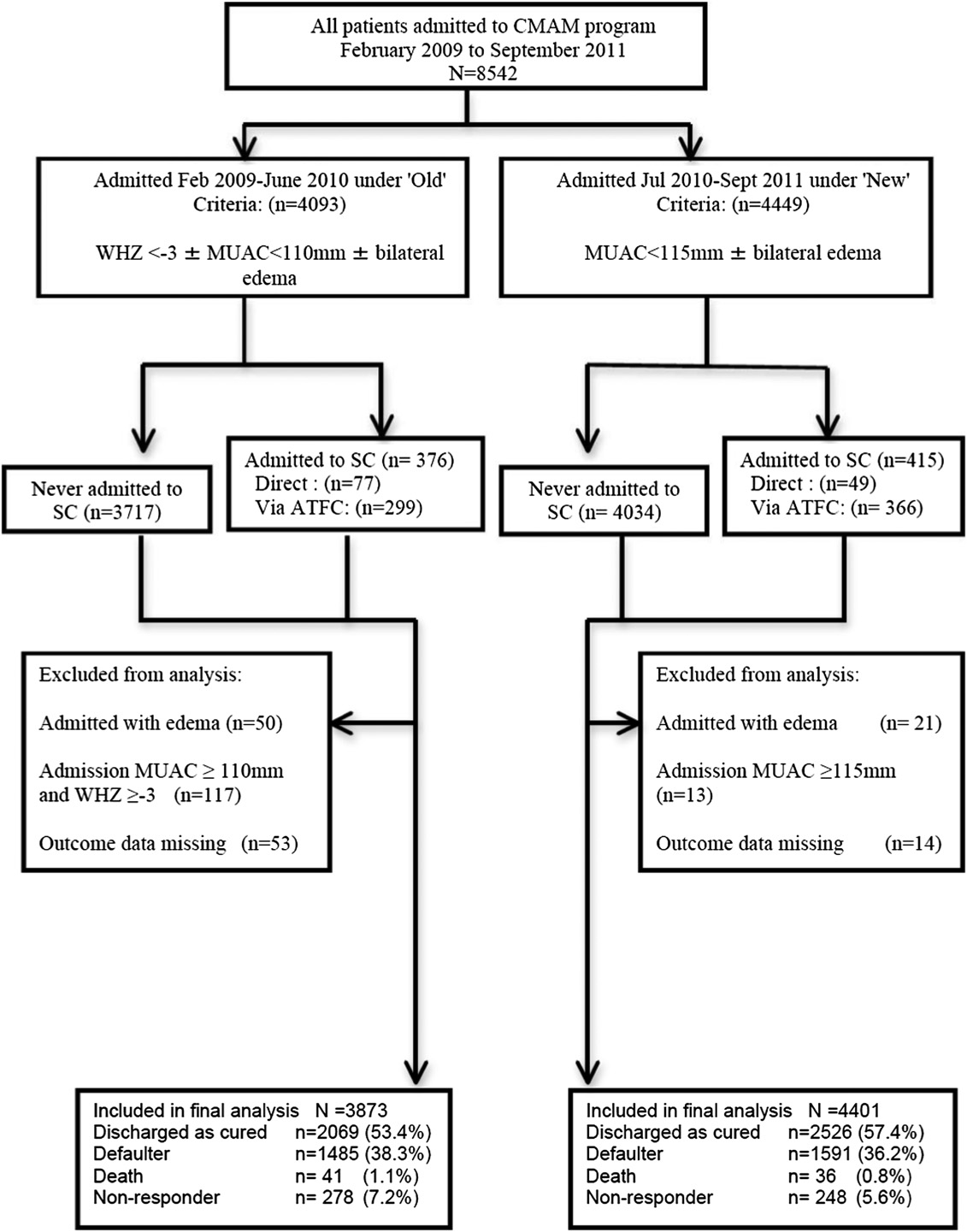 COMMUNITY-BASED MANAGEMENT OF SAM IN INDIA Flowchart of analysis. ATFC, Ambulatory Therapeutic Feeding Center; CMAM, community-based management of acute malnutrition; MUAC, midupper arm circumference; SC, Stabilization Center; WHZ, weight-for-height z score.
Profile and outcomes of children admitted and discharged Profile and outcomes of children admitted into the SC under the new criteria Of 8542 children admitted during the study period, 791 Table 5 shows profiles and outcomes of 4401 children ad- children (9.3%) required admission to the SC at some point mitted between July 2010 and September 2011 with an MUAC during treatment; of those admitted, 698 children met the in- ,115 mm and/or bilateral edema. Children were discharged clusion criteria for analysis. Profiles and outcomes of these as cured when they reached an MUAC $120 mm with no children are summarized in Table 6.
edema for 1 wk and were in good clinical condition with For children who required care in the SC at any stage during a good appetite. WHZ targets were not incorporated in the their treatment, the mean MUAC at time of admission into the new criteria.
program (104. 0 mm 6 12.6) was lower than that in children 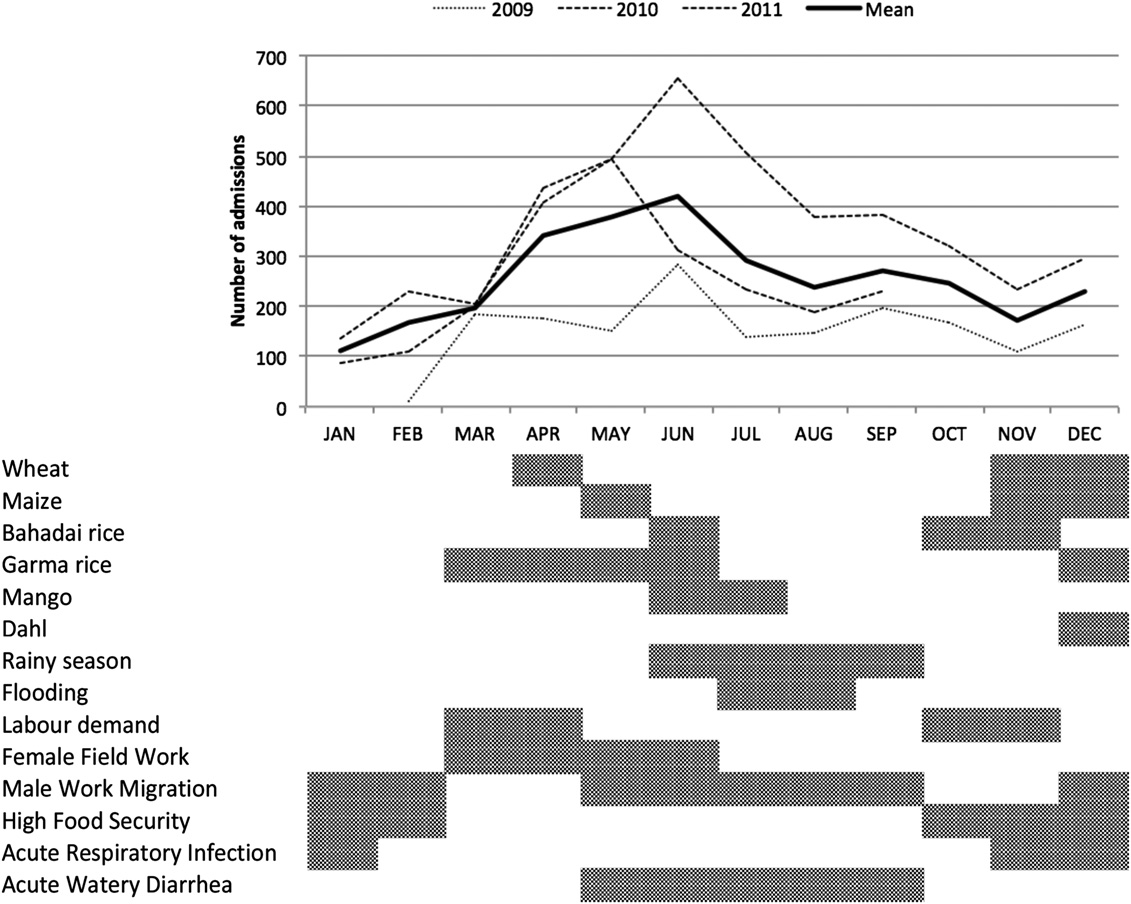 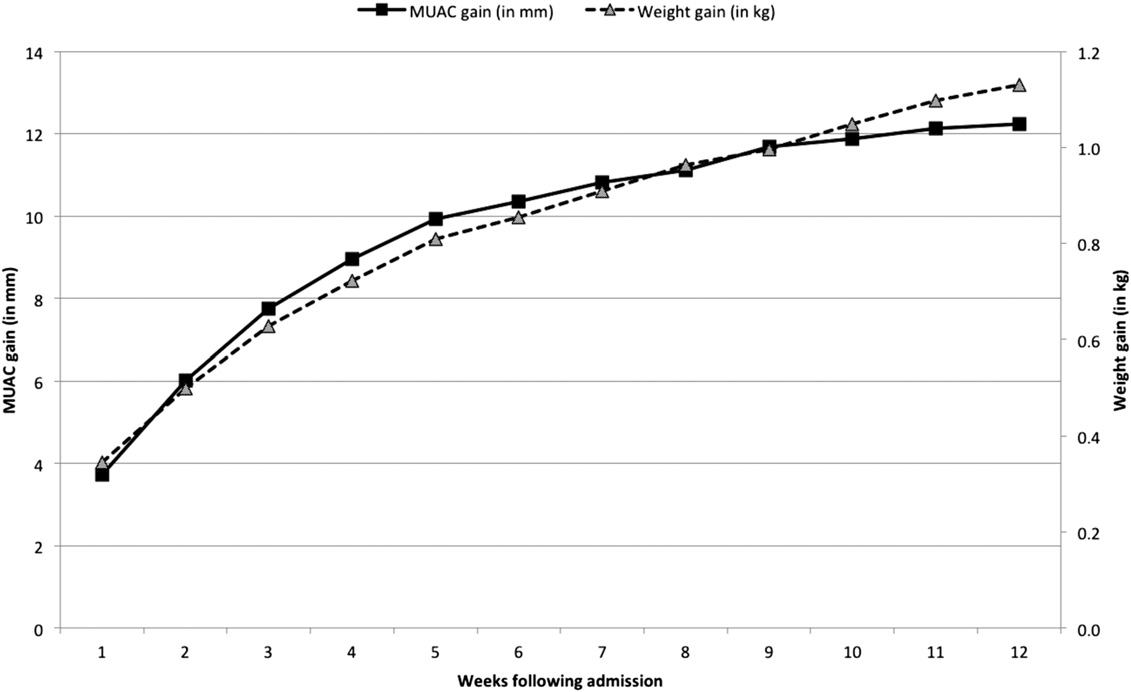 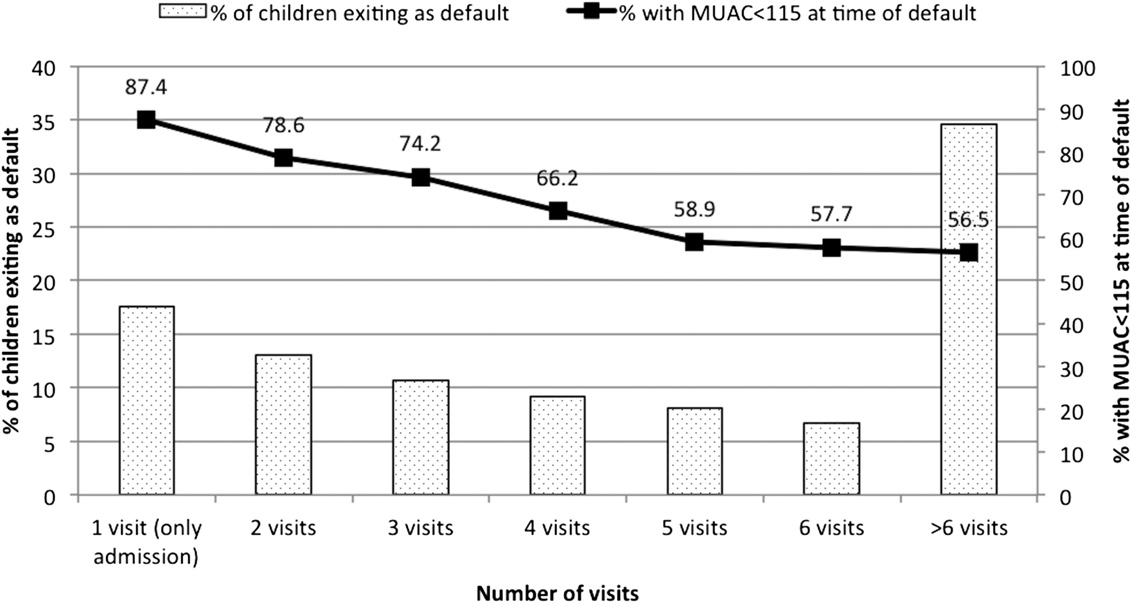 BURZA ET AL.
Length of stay before defaulting and associated MUAC at time of default (n = 3076). MUAC, midupper arm circumference.
weight gain was lower and the LOS was higher in children with The overall in-program mortality was 0.9%, which was well more-severe wasting than in children with a higher MUAC on within the bounds of standards set out in both national (,5% admission to the SC, reflecting longer periods spent in phase 1 mortality) and international (,10% mortality) standards of care treatment (because of more-severe illness) when weight gain (17, 25). Although excluded from the analysis, the mortality rate was not expected.
was far higher (15.5%) in the 71 children admitted with edema TABLE 7Risk factors for default from CMAM program1 Adjusted OR (95% CI) Age group (n = 7671) (mo) Caste category (n = 7199) Other Backward Class WHO WHZ on admission (n = 7654) MUAC on admission (n = 7657) (mm) Child's residence (n = 7671) Admission criteria (n = 7671) Referred into the program by ASHA (n = 7656) 1Nonresponders were not included in this analysis. CMAM, community-based management of acute malnutrition; MUAC, midupper arm circumference; WHZ, weight-for-height z score.
2Included in regression model as borderline significance on univariate analysis (P = 0.08). 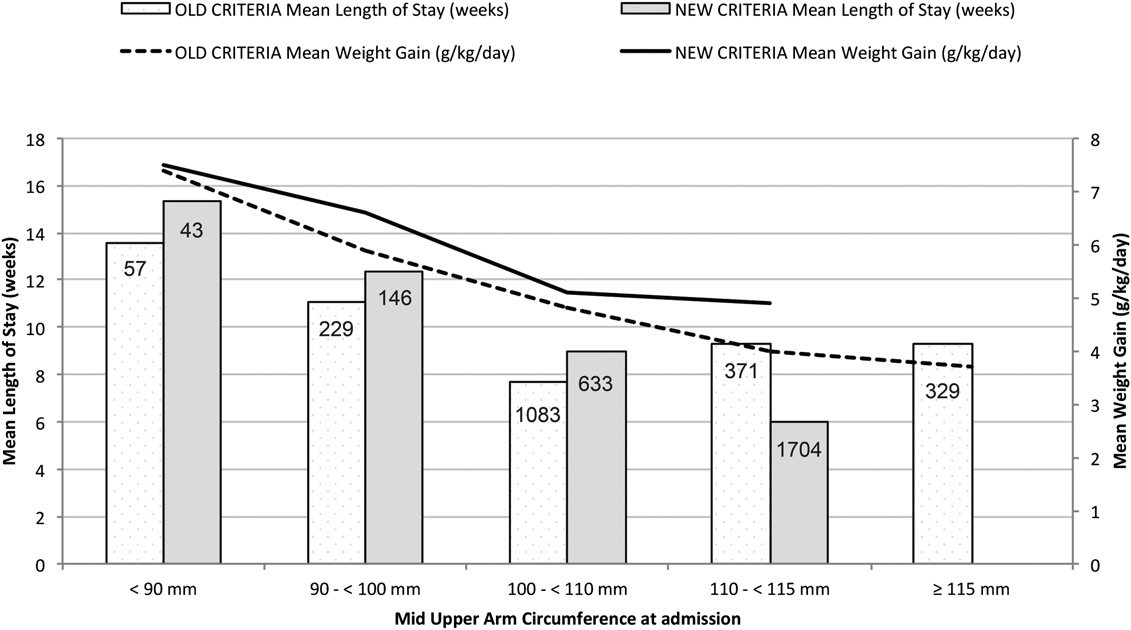 7th Workshop on Recent Issues in Bioanalysis Poster List Tuesday April 9 Posters Poster T01: "Validation of a Dried Blood Spot Boanalytical Method for Perampanel Analysis in Pediatric Studies" Poster Presenter: Dr. Luca Matassa (Eisai, Woodcliff Lake, NJ, USA) Introduction: Perampanel is a first-in-class, orally administered, highly selective non-competitive AMPA-type glutamate receptor antagonist, developed by EISAI for epilepsy. A DBS-LC-MS/MS method has been developed and validated in order to analyse perampanel in heparinised blood samples from paediatric studies. Dried blood spots (DBS) have been shown to be a useful means of collecting, storing and shipping blood samples for quantitative drug analysis which provides advantages over conventional plasma collection. Moreover, due to low sample volume that DBS uses, it is a method of choice when it is comes to paediatric studies. Methods: A 20 uL dried blood spot on FTA DMPK A card is punched (6mm punch) and the subsample is solubilized by shaking in 150 uL of 90/10 methanol water containing internal standard (IS) stable label peramapanel. An aliquot of the solution is diluted with an equal volume of 50/50 methanol/water, centrifuged at 4C for 5 min prior to injecting 10uL on a reverse phase column (Chromolith RP18e 100x3mm) at 40C under gradient conditions. The detector was a Sciex API5500 Qtrap operated in positive ion ionspray mode. Quantitation was achieved monitoring precursor/product ions for analyte and IS (350/219 m/z perampanel; 356/219 IS) at retention time 2.5 minutes using 1/x2 linear weighted regression. Result: A full validation according to FDA and EMA guidance was conducted in human blood. Assay linearity was demonstrated over 7 validation runs with R-squared greater than 0.995. The intra-run accuracy and precision was between 95.2 -107.6% and 3.1-12.6%, respectively, at four concentration levels (LLQ, low QC, mid QC, high QC) demonstrating the repeatability of the analytical method from 1 to 500 ng/mL. The matrix factor in 6 lots of control blood was 1.0 for analyte and IS. Control blank matrix showed no interference at the LLQ. Punch tool carryover and autoinjector carryover were not found to impact assay performance. Analyte and IS recovery was 80% across all 3 QC levels with imprecision less than 5%. A 2-fold dilution factor was validated. The specificity of the method for perampanel at the LLOQ in presence of 10 other commonly used AEDs, individual y or pooled all together, (valproic acid, phenobarbital, lamotrigine, topiramate, oxcarbazepine, carbamazepine, levetiracetam, zonisamide, phenytoin, primidone) was demonstrated. A blood/plasma ratio of 0.88 was determined, allowing the correlation between blood and previous study plasma results. Short term autosample perampanel extract stability and perampanel stability in blood was demonstrated. Perampanel long term stability on DBS was demonstrated for 363 days at room temperature. Novel Aspect / Conclusion: The fully validated DBS-LC-MS/MS method was successfully applied to analysis of paediatric study clinical samples. Poster T02: "Unexpected Results for Sample Col ection and Handling Stability Assessment for Sumatriptan in Human Plasma" Poster Presenter: Ginny James (Celerion, Lincoln, Nebraska, USA) Introduction: Determination of sample col ection and handling stability (SCHS) is a requirement for validation of bioanalytical methods. SCHS of sumatriptan for 120 minutes did not meet pre-defined acceptance criteria. As sumatriptan was stable in plasma for 23 hours at ambient temperature, it was hypothesized that partitioning of sumatriptan between plasma and red blood cells was not immediate and was impacting the results of the early time points. Methods: Whole blood was fortified with sumatriptan at 0.150 and 100 ng/mL for target plasma concentrations of approximately 0.300 and 200 ng/mL. The samples were incubated in an ice-water bath, at ambient temperature, and at 37°C for multiple time points between 0 and 120 minutes. At each time point, samples were centrifuged, and the plasma layer was immediately frozen at -20°C. For samples in an ice-water bath for 30 minutes, the red cell fraction was also stored at -20°C for testing. The collected plasma samples were analyzed using a validated method for the quantitation of sumatriptan in human plasma. Red blood cel s were analyzed with the same chromatographic and instrument conditions after a protein crash of the cellular material.