Are the adverse effects of glitazones linked to induced testosterone deficiency?

Center for Sexual Medicine Center for Sexual Medicine Papers Are the Adverse Effects ofGlitazones Linked to InducedTestosterone Deficiency? Carruthers, M, TR Trinick, E Jankowska, AM Traish. "Are the adverse effects ofglitazones linked to induced testosterone deficiency?" Cardiovascular Diabetology7:30. (2008)http://hdl.handle.net/2144/2660Boston University Hypothesis
Are the adverse effects of glitazones linked to induced testosterone
deficiency?
M Carruthers*1, TR Trinick2, E Jankowska3,4,5 and AM Traish6
Address: 1Centre for Men's Health, 20/20 Harley Street, London, UK, 2Department of Chemical Pathology, The Ulster Hospital, Belfast, (TRT) UK, 3Cardiology Department, Military Hospital, Wroclaw, Poland, 4Institute of Anthropology, Polish Academy of Sciences, Wroclaw, Poland, 5National Heart and Lung Institute, Imperial College, London, (EJ) UK and 6Institute for Sexual Medicine, Boston University School of Medicine, Center for Advanced Biomedical Research, Boston, (AMT) USA Email: M Carruthers* - [email protected]; TR Trinick - [email protected]; E Jankowska - [email protected]; AM Traish - [email protected] * Corresponding author Published: 15 October 2008 Received: 12 August 2008Accepted: 15 October 2008 Cardiovascular Diabetology 2008, 7:30
2008 Carruthers et al; licensee BioMed Central Ltd. This is an Open Access article distributed under the terms of the Creative Commons Attribution License (), which permits unrestricted use, distribution, and reproduction in any medium, provided the original work is properly cited.
Background: Adverse side-effects of the glitazones have been frequently reported in both clinical and
animal studies, especially with rosiglitazone (RGZ) and pioglitazone (PGZ), including congestive heart
failure, osteoporosis, weight gain, oedema and anaemia. These led to consideration of an evidence-based
hypothesis which would explain these diverse effects, and further suggested novel approaches by which
this hypothesis could be tested.
Presentation of hypothesis: The literature on the clinical, metabolic and endocrine effects of glitazones
in relation to the reported actions of testosterone in diabetes, metabolic syndrome, and cardiovascular
disease is reviewed, and the following unifying hypothesis advanced: "Glitazones induce androgen deficiency
in patients with Type 2 Diabetes Mellitus resulting in pathophysiological changes in multiple tissues and organs
which may explain their observed clinical adverse effects." This also provides further evidence for the
lipocentric concept of diabetes and its clinical implications.
Testing of the hypothesis: Clinical studies to investigate the endocrine profiles, including
measurements of TT, DHT, SHBG, FT and estradiol, together with LH and FSH, in both men and women
with T2DM before and after RGZ and PGZ treatment in placebo controlled groups, are necessary to
provide data to substantiate this hypothesis. Also, studies on T treatment in diabetic men would further
establish if the adverse effects of glitazones could be reversed or ameliorated by androgen therapy. Basic
sciences investigations on the inhibition of androgen biosynthesis by glitazones are also warranted.
Implications of the hypothesis: Glitazones reduce androgen biosynthesis, increase their binding to
SHBG, and attenuate androgen receptor activation, thus reducing the physiological actions of
testosterone, causing relative and absolute androgen deficiency. This hypothesis explains the adverse
effects of glitazones on the heart and other organs resulting from reversal of the action of androgens in
directing the maturation of stem cells towards muscle, vascular endothelium, erythroid stem cells and
osteoblasts, and away from adipocyte differentiation. The higher incidence of side-effects with RGZ than
PGZ, may be explained by a detailed study of the mechanism by which glitazones down-regulate androgen
biosynthesis and action, resulting in a state of androgen deficiency.
(page number not for citation purposes) 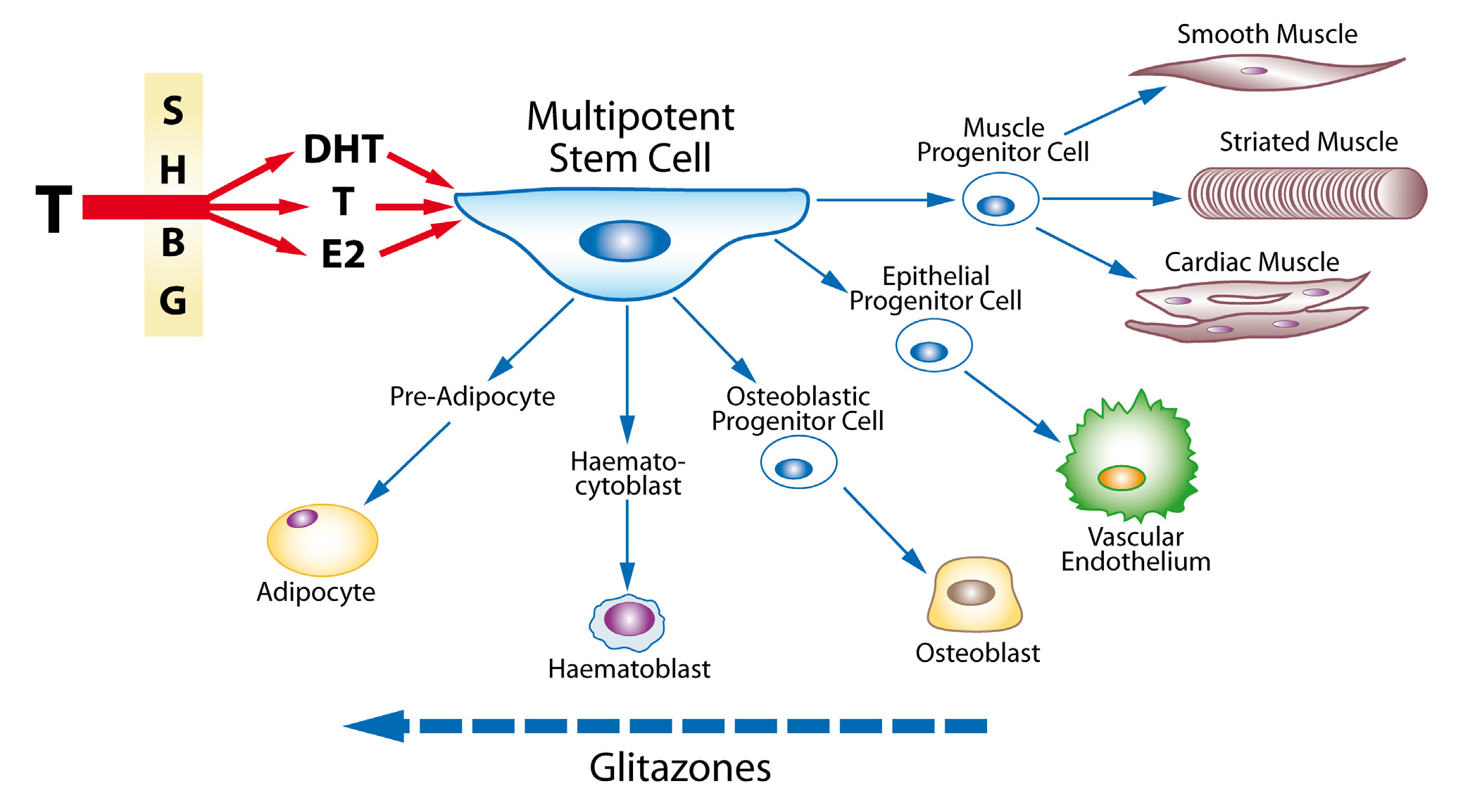 Cardiovascular Diabetology 2008, 7:30
glitazones give rise to a unifying hypothesis based on Recent clinical studies have raised serious concerns reduction of testosterone biosynthesis and function regarding the safety of glitazones, especially rosiglitazone(RGZ) and pioglitazone (PGZ) to regulate hyperglycemia Presentation of hypothesis
in diabetic patients. A meta-analysis study ] demon- A Unifying Hypothesis Linking the Adverse Effects of
strated use of RGZ was associated with a "significant Glitazones to Induced Testosterone Deficiency
increase in the risk of myocardial infarction and with an We advance the following unifying hypothesis: "Glitazones increase in the risk from cardiovascular causes that had border- induce androgen deficiency in patients with Type 2 Diabetes line significance". These side effects were confirmed by Mellitus resulting in pathophysiological changes in multiple tis- other clinical studies[ and meta-analysehough sues and organs which may explain their observed clinical some investigators, particularly those reporting the effects adverse effects of PGZ treatm reductions in cardiacdeaths.
It also provides further evidence for Ungar's theory of the'Lipocentric Pathway to Hyperglycemia', and explains the Because of the widespread use of glitazones, it is of con- toxic ectopic fat distribution in multiple organs, together siderable practical importance to understand the potential with its clinical implications mechanisms underlying the differing effects of these twothiazolidines on clinical endpoints, in spite of their appar- Evidence Supporting this Hypothesis
ent similar effectiveness in reducing blood glucose, as well A. Epidemiological Studies as their wide range of adverse side-effects, including There is increasingly considered that low T levels in men weight gain, anaemia and osteoporosis. These links play an important role in the causation of T2DM, and are between the clinical, metabolic and endocrine effects of associated with reduced insulin sensitivity n men, cir-culating T is inversely related to classical cardiovascular Unifying hypothesis linkin g the adverse effects of glitazones to induced testosterone deficiency Unifying hypothesis linking the adverse effects of glitazones to induced testosterone deficiency. Testosterone,
either directly or by conversion to dihydrotestosterone or oestradiol, all largely regulated by the effect of Sex Hormone Bind-
ing Globulin, acts on the Multipotent Stem Cell to promote differentiation to the progenitor cells for muscle, endothelium,
bone, and red blood cells. By causing androgen deficiency, glitazones may reverse these effects and promote adipocyte produc-
tion and action, with adverse clinical side-effects.
(page number not for citation purposes) 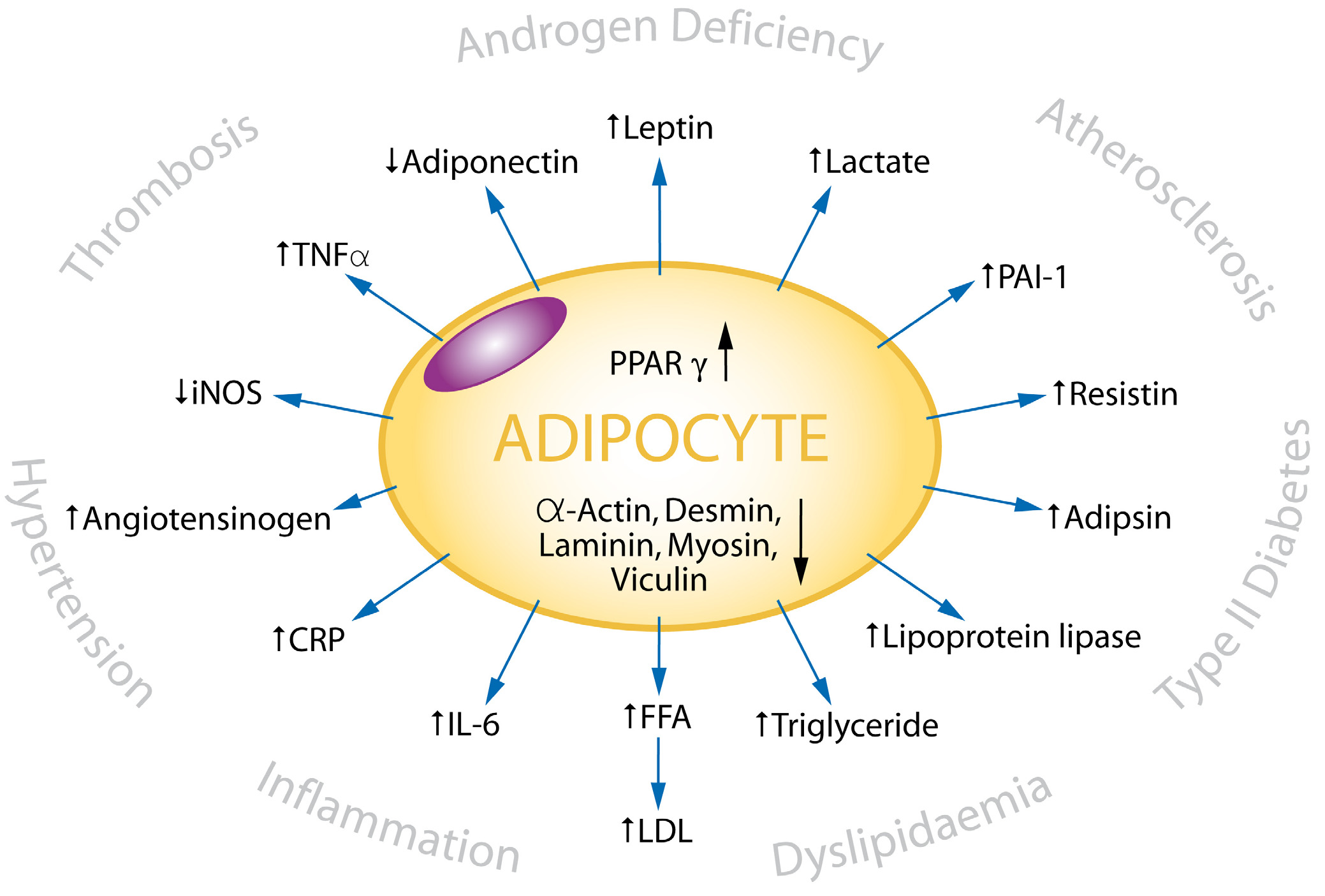 Research and the Approval Process An agent sequentially collects information to obtain a principal's approval, such as a pharmaceutical company seeking FDA approval to introduce a new drug. To capture suchenvironments, we study strategic versions of the optimal stopping time problem …rst proposedby Wald (1945). Our ‡exible model allows us to consider di¤erent types of rules and commit-ments by the principal as well as strategic withholding of information by the agent. We shedlight on current regulation and proposed reforms of the drug approval process. The modelalso captures situations such as a …rm seeking antitrust approval to merge with a competitor,a manager proposing a project to the …rm's headquarters or an author submitting a paper toan editor.