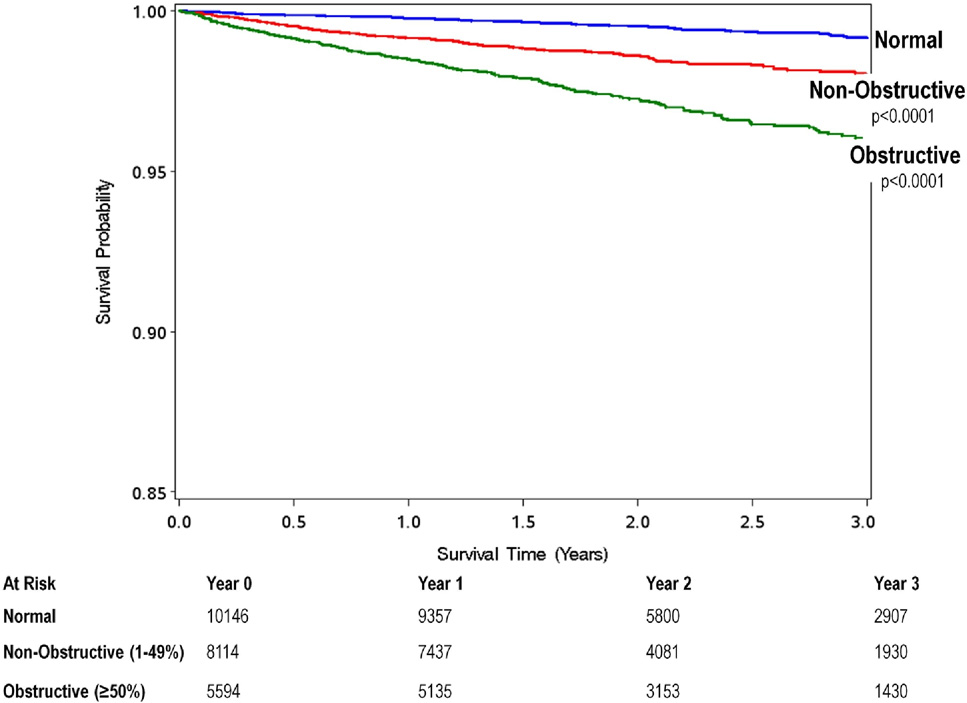 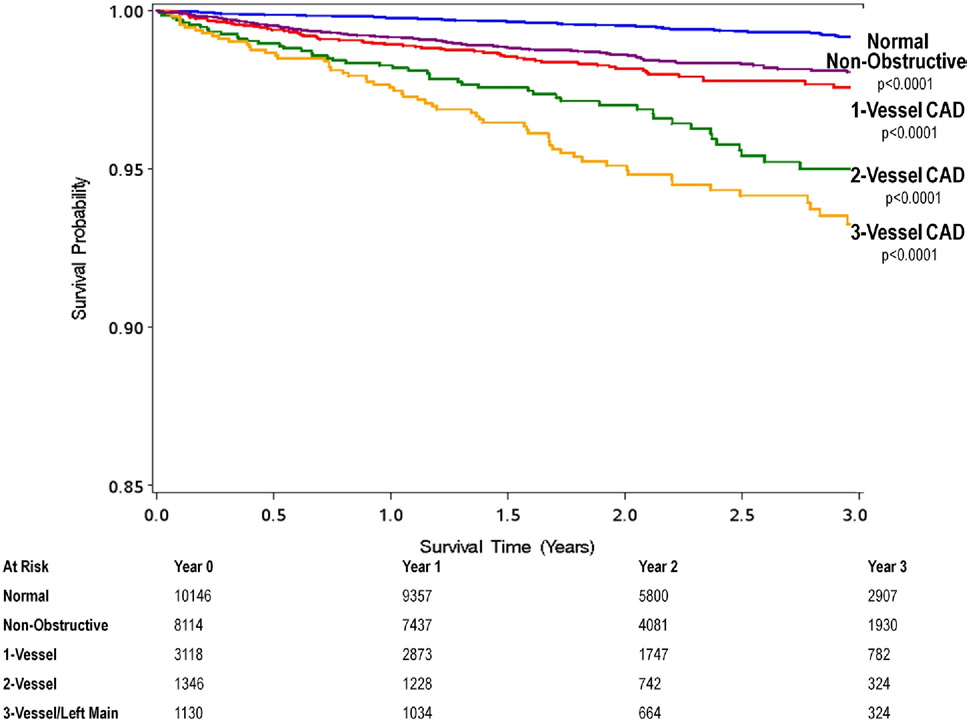 JACC Vol. 58, No. 8, 2011 August 16, 2011:849 – 60 Age- and Sex-Related Prognosis by CCTA Unadjusted All-Cause 3-Year Kaplan-Meier Survival by the Presence, Extent, and Severity of CAD by CCTA Note the dose-response relationship of mortality to increasing numbers of vessels with obstructive coronary artery disease (CAD).
CCTA ⫽ coronary computed tomography angiography.
Female patients referred to CCTA had higher pre-test and CAD (p ⫽ 0.21) and sex and CAD (p ⫽ 0.76) did not probability of CAD than men. Differences in pre-test reveal significant relationships.
likelihood for obstructive CAD existed by sex, with maleand female patients presenting with low (pre-test probabil- ity low 35% vs. 24%, intermediate 56% vs. 68%, and high9% vs. 9%; p ⬍ 0.0001). As compared with individuals These results of the CONFIRM registry represent the first without CAD within respective sexes, women experienced prospective international multicenter data to relate CCTA- higher hazards for mortality for 3-vessel or LM obstructive determined extent and severity of CAD to all-cause mor- CAD than males, with similar rates of death for nonob- tality and demonstrate the independent prognostic value of structive, 1-vessel, and 2-vessel obstructive CAD both obstructive as well as nonobstructive CAD by CCTA.
Importantly, this study had adequate sample size and was When stratified by both age and sex, differences in adequately powered (beta ⬎0.90, alpha ⬍0.001) to permit multivariable risk-adjusted hazards for mortality were ob- differential risk stratification of individuals as categorized by served for nonobstructive and 1-, 2-, and 3-vessel or LM age group and sex. The findings of this study should be obstructive CAD Tests for interactions of age considered widely generalizable, given the high number of Versus > All-Cause All-Cause Mortality for Patients <65 Versus >65 Years of Age
Age <65 Yrs
3-vessel disease or left main disease Abbreviations as in 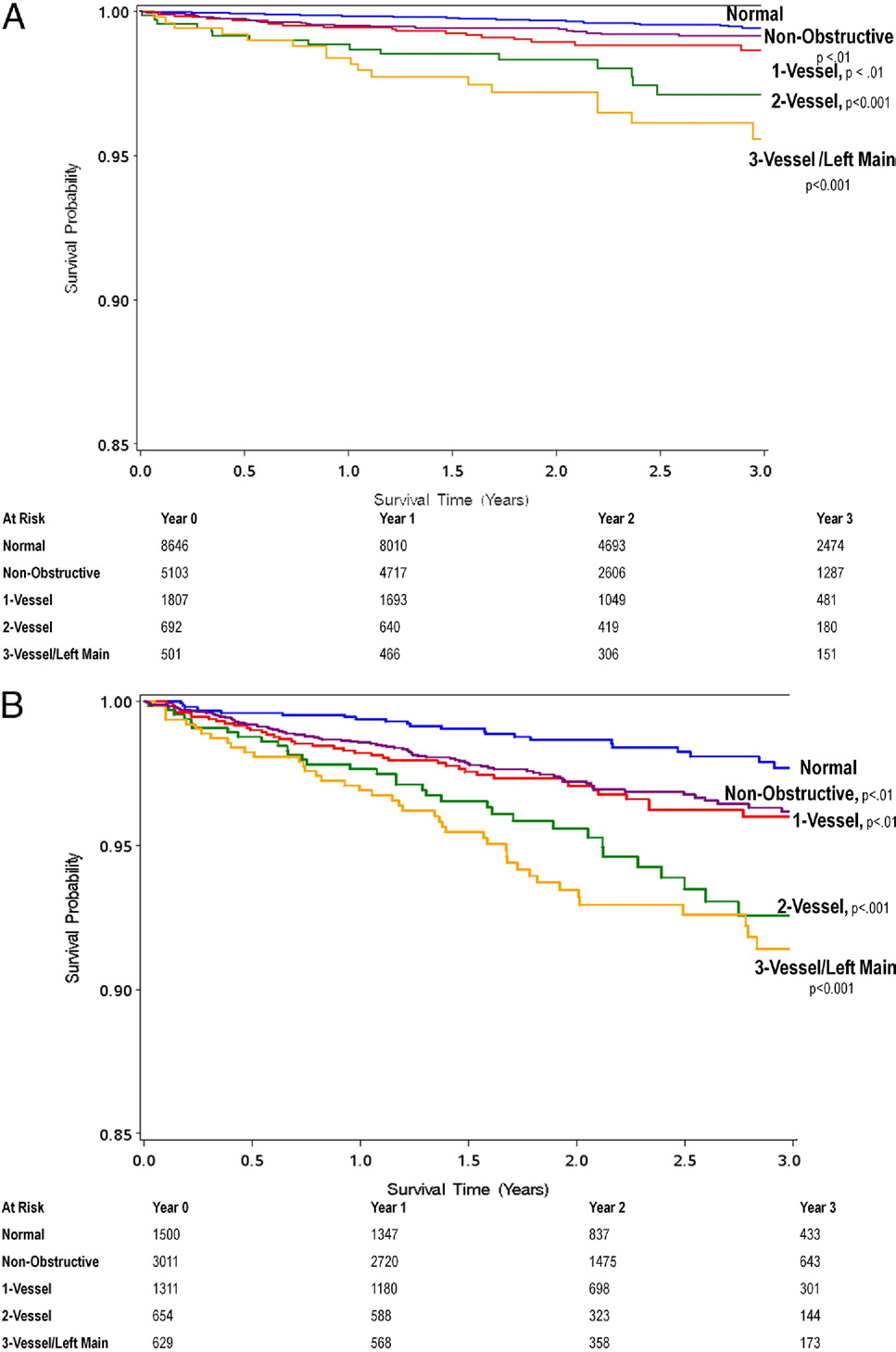 JACC Vol. 58, No. 8, 2011 Age- and Sex-Related Prognosis by CCTA August 16, 2011:849 – 60 Unadjusted All-Cause 3-Year Kaplan-Meier Survival by Presence, Extent, and Severity of CAD by CCTA as Stratified by Age <65 or >65 Years
Although rates of mortality in relationship to CAD extent are lower in patients age ⬍65 years (A), patients age ⬍65 years with 2- and 3-vessel CAD experience a higherrelative rate of mortality referenced to patients age ⬍65 years with no CAD in comparison with patients age ⱖ65 years with 2- and 3-vessel CAD referenced to patientsage ⱖ65 years with no CAD (B). Abbreviations as in JACC Vol. 58, No. 8, 2011 August 16, 2011:849 – 60 Age- and Sex-Related Prognosis by CCTA Adjusted Hazard Ratios for All-Cause Mortality for Female Versus Male Patients Adjusted Hazard Ratios for All-Cause Mortality for Female Versus Male Patients 3-vessel/left main disease Abbreviations as in enrolled subjects; the inclusion of numerous clinical sites assessment The current data suggest that use of the within North America, Europe, and Asia; and the unifor- D-F method is insufficient for this purpose and should not mity of study results across sites.
be used solely as a judge of risk.
Despite increasing adoption of CCTA for clinical use in We also identified a utility of nonobstructive CAD individuals with suspected CAD, limited "real world" effec- detection for risk stratification of individuals at height- tiveness evidence still exists to support the prognostic ened risk of incident death. Indeed, individuals with significance of CAD findings as detected by current- nonobstructive CAD (HR: 1.62; 95% CI: 1.08 to 2.43) generation ⱖ64-detector row CCTA. Furthermore, prior by CCTA experienced a mortality risk that was similar to studies to date that have examined the ability of CCTA that of those with obstructive 1-vessel CAD (HR: 1.75; findings to stratify risk have been generally limited to single 95% CI: 1.12 to 2.72). These data corroborate our prior centers with relatively small sample sizes. We previously studies using older generation electron beam CT tech- reported the predictive value of CCTA measures of CAD nology, where the presence of nonobstructive CAD extent and severity in a 2-center study of 5,330 consecutive conferred similar risk as 1-vessel obstructive CAD. These patients, but data were limited in that population to vessel- findings have important implications, as patients with based analyses, and the prognostic potential of segment- nonobstructive CAD comprise the majority of patients based as well as nonobstructive CAD detection by CCTA who experience myocardial events and for whom func- could not be examined In a separate analysis, we tional stress testing aimed at detecting flow-limiting reported the prognostic significance of CCTA-identified coronary artery stenoses would be expectedly negative CAD findings in 1,256 consecutive patients with suspected Given a robust evidence base demonstrating the CAD for the prediction of major adverse cardiac events highly salutatory effect of primary prevention of CAD Although we noted a 16- to 17-fold increased risk in events in at-risk individuals, future studies should be myocardial events in patients with obstructive CAD, the performed to determine the effect of aggressive medical observed event rates were low (0.6% to 1.8%) and the therapy and lifestyle modification for individuals with follow-up duration shorter than in the present study. In this CCTA-identified nonobstructive CAD.
regard, the current data extend prior studies by examining We recently reported the results of an exploratory CCTA findings of CAD in a large consecutive cohort analysis of 1,127 consecutive patients with suspected comprising multiple international sites that was evaluated by CAD undergoing 16-detector row CCTA identified to current-generation computed tomography (CT) technology have only obstructive CAD. In this study, 490 patients for measures of both obstructive and nonobstructive CAD.
were identified as having nonobstructive CAD (as de- That CCTA can effectively risk stratify individuals without fined by maximal ⬍50% luminal diameter stenosis at the known CAD should be invaluable for guiding the develop- per-patient level) In 4-year follow-up, the number ment of clinical practice guidelines and appropriate use of coronary segments exhibiting nonobstructive CAD was predictive of incident death in women but not in One notable finding in our study was that although the men. This study expands on these prior published results pre-test likelihood of obstructive CAD—as estimated by by using a study cohort of sufficient magnitude to the Diamond-Forrester (D-F) tabular method—was highly examine the presence of nonobstructive CAD at the predictive of the presence of obstructive CAD by CCTA, it per-patient level. The present data corroborate the prior did not demonstrate predictive value for incident death in data, revealing a prognostic value for per-patient nonob- this large cohort of patients with suspected CAD. At structive CAD detection in women but not in men.
present, clinicians commonly use D-F pre-test estimations Further, the current study extends prior study results by of likelihood of obstructive CAD as a metric to determine demonstration that 1-vessel obstructive CAD also con- whether patients would benefit from noninvasive testing.
fers heightened risk of death in women but not in men.
Because global clinical risk scores are currently lacking for Numerous possibilities exist to explain these findings.
symptomatic stable individuals with suspected CAD, many Women in our study had lower rates of both obstructive have also adopted use of the D-F method for "risk" and nonobstructive CAD in contrast to their male 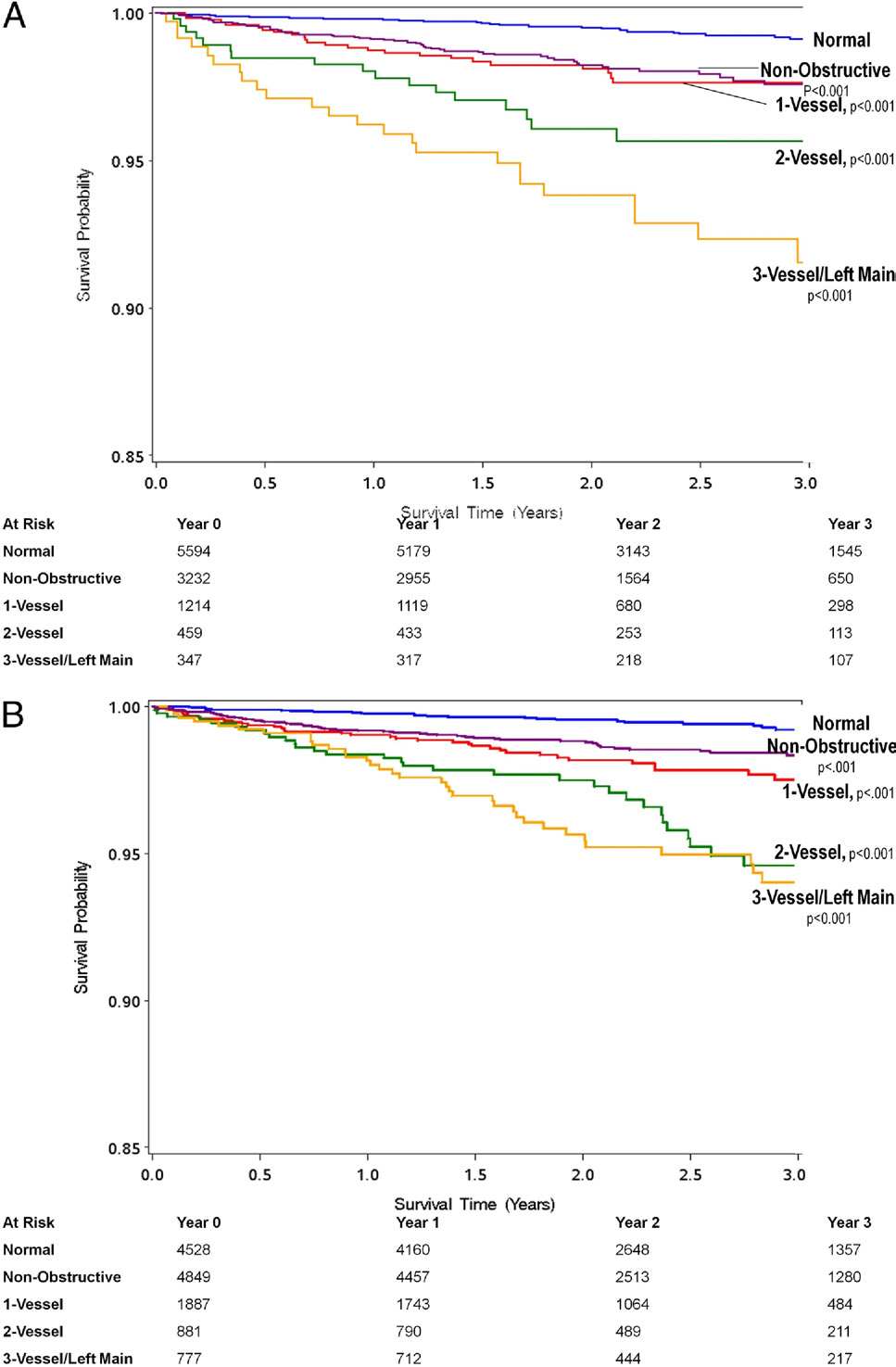