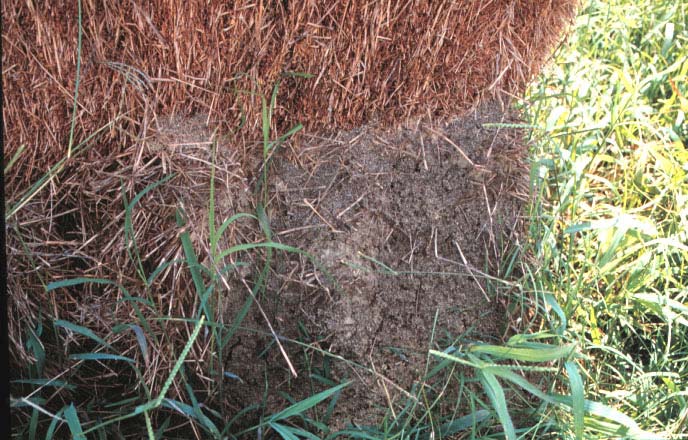 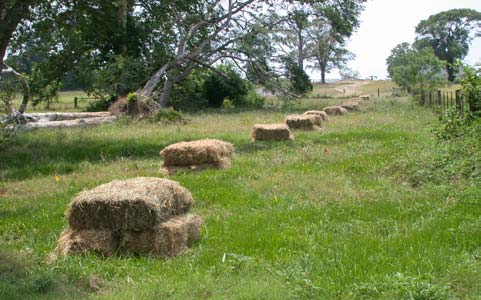 that some ant colonies may have occurred underneath or near the stacks of bales deeper in thesoil than what was treated with the soil surface spray of the contact insecticides. After a shorttime (> 7 days) foraging ants tunneling up from these colonies may have been able to "cover-up"the chemical through excavation of uncontaminated dirt from deep within their colonies, therebyavoiding contact with treated soil particles and insecticide residues. Results suggest the need foranother experiment where, larger areas in and around areas designated as hay storage locationsmay be selected for broadcast applications, to reduce ant populations, in addition to targetedapplication of chemically treated barriers.
One important finding from this study is the presence of foraging worker ants attracted to hay bales on the second layer of stacked bales. The presence of live worker ants on regulateditems constitutes an infestation according to USDA fire ant quarantine regulations and thesesecond-layer bales would, therefore, be considered infested and not allowed to be transportedoutside of quarantined areas. The practice of allowing producers to move bales from untreatedstacks not directly in contact with the ground (i.e., second layer and up), is therefore brought intoquestion by these results. Funding for this research was provided to Michael Heimer, County Extension Agent, Agriculture, Montgomery County, Texas through the Texas Department of Agriculture and theTexas Imported Fire Ant Research and Management Project. Thanks to Mr. Berkeley, for hayand field sites and to Mr. Kyle Miller at American Cyanamid for the Amdro® donation. Thanksto Dr. Charles Barr for bait application support and equipment use.
Figure 1. A large fire ant colony moved
Figure 2. Stacks of hay in Montgomery
against stack of hay.