Toward a new gold standard for early safety: automated temperature-controlled herg test on the patchliner® 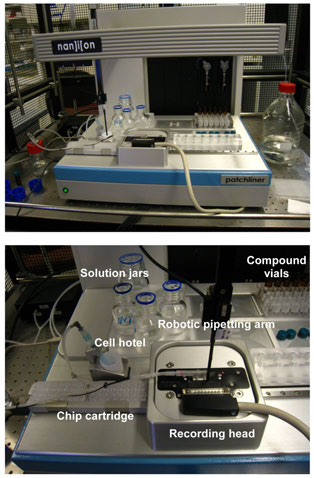 Patchliner® hERG assay (Hyclone, USA) and 500 μg/ml gentamycin solution (Gibco, UK)at 35–37˚C in 5% CO2.
Conﬂuent cell cultures were subcultured every 2–3 days using Accumax (Innovative Cell Technologies Inc., USA). Before elec-trophysiological experiments, cells were treated with Accumax for3–5 min at 42˚C, harvested, and centrifuged at 1000 rpm for 1 min.
The pellet was gently resuspended in the extracellular solution anddirectly used for electrophysiological recording.
SOLUTIONS
The extracellular solution contained (mM): NaCl 150; KCl 4;
CaCl2 1.2; MgCl2 1; HEPES 10; pH 7.2–7.6 with NaOH, osmolar-
ity 290–330 mOsm. The internal solution contained (mM): KCl,
50; KF, 60; NaCl, 10; HEPES, 10; EGTA, 20; pH 7.0–7.4 with KOH,
osmolarity 260–300 mOsm.
All solutions were ﬁltered through 0.2 μM GP Millipore Express PLUS membrane and stored in aliquots at +2–8˚C.
COMPOUNDS
Olanzapine was synthesized by Roche (Basel, Switzerland). Amio-
darone, astemizole, bepridil, clemastine, haloperidol, terfena-
dine, and verapamil were purchased from Sigma (USA), cis-
apride from Research Diagnostic Inc. (USA), E-4031 from
Wako Chemicals (Japan), quinidine from Aldrich Chemicals
(USA), d,l-Sotalol from Bristol-Myers-Squibb (USA), amoxi-
cillin, ﬂuoxetine, isradipine, and tamoxifen from USP (USA),
glyburide/glibenclamide from Calbiochem (USA), ibuprofen from
ICN Biomedicals Inc. (USA), moxiﬂoxacin from APIChem Tech-
nologies Co. (China), and erythromycin and captopril from Fluka
(Switzerland).
Selection of test concentrations for each compound was done based on the hERG potency data and the solubility in the extracel-lular solution. Stock solutions of compounds were freshly preparedin DMSO. Test solutions were made such that solvent concen- FIGURE 1 The Patchliner® is shown at the top panel and a closer view
trations were kept constant throughout the experiment (0.1%).
of the working area is presented below.
Compound solutions were transferred to 4 mL glass vials that wereplaced in the compound plate holder of the patch clamp system for a few minutes and currents were steady, IKhERG amplitude andkinetics were recorded under control conditions (vehicle control) AUTOMATED PATCH CLAMP PROCEDURES ON THE PATCHLINER®
for 3–5 min. Thereafter, a single test item concentration was added On the day of the experiment, an aliquot of the cell suspension in and incubated for at least 3 min until a new steady state current the extracellular solution was placed in the cell hotel level was reached (see and for the experimental pro- Cells were added to each chip well and attracted to the holes by cedure). At the end of the compound incubation, a 1 μM solution suction applied by a pressure controller. Once a stable whole-cell of standard IKhERG blocker E-4031 was applied twice to each cell conﬁguration was obtained, the experimental protocol was ini- for 1 min to suppress IKhERG entirely.
tiated. K+ currents were measured with a patch–voltage-clamp IKhERG amplitudes were recorded at four to ﬁve drug concen- technique in the whole-cell conﬁguration at 35–37˚C using the trations. The hERG current was measured as the average current QuadroEPC-10 ampliﬁer (HEKA Elektronik GmbH, Germany) from ﬁve sweeps collected at the end of vehicle or compound addi- and associated software (Patch MasterPro). Currents were low- tion. After subtracting current levels from that of full block (i.e., pass ﬁltered using the internal Bessel ﬁlter of the EPC-10 and positive control) they were compared to the vehicle control values digitized at 50 kHz. Series resistance was typically 2–4 MΩ and (taken as 100%) to deﬁne fractional blocks. The fractional block values at single concentrations were saved in the appropriate.xls Cells were held at a resting voltage of −80 mV and stimulated ﬁle generated by PatchControlHT software (Nanion). Data were by a voltage pattern to activate hERG channels and conduct out- expressed as mean ± SEM for each drug concentration and were ward IKhERG current bottom panel), at a stimulation used to determine the concentration–response relationship for the frequency of 0.1 Hz (6 bpm). The reported current amplitudes test compounds. The effect of the solvent (DMSO) on the hERG represent the maximal peak tail current. After the cells stabilized K+ current was studied in a vehicle control group. 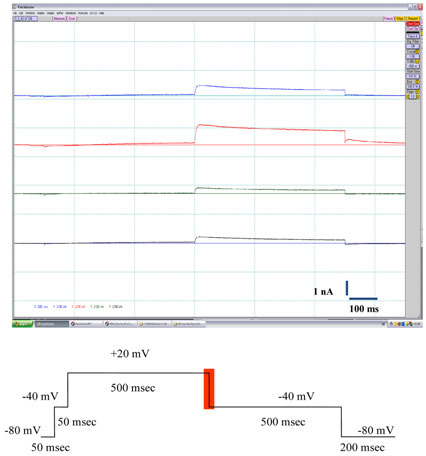 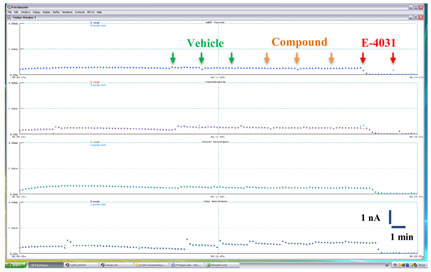 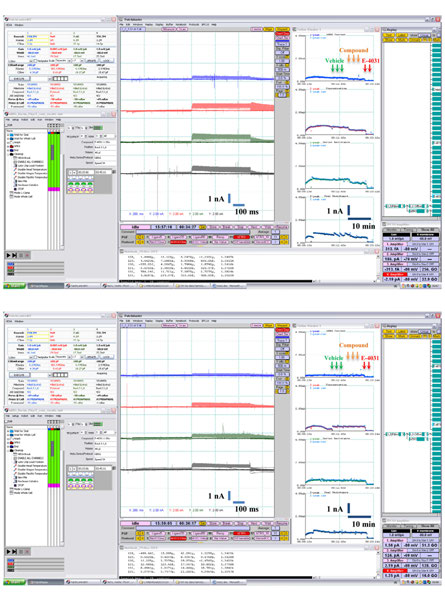 Patchliner® hERG assay FIGURE 4 Examples of pharmacological experiments on the
hERG K+ current to the right. Arrows indicate compound additions for Patchliner®. Recordings from four cells were performed in parallel.
vehicle (0.1% v/v DMSO), test item single concentration [0.3 μM Original traces are shown in the middle with the on-line analysis quinidine in (A) and 6 μM glibenclamide in (B)] and positive control
window showing the time course of a compound effect on the peak (1 μM E-4031).
where C was the concentration, IC50 the 50% inhibitory concen- If the effect of a drug on the currents was ≤20% at the highest tration, h the Hill coefﬁcient.
concentration tested, IC50 was reported as exceeding the highest Concentration–response curves were ﬁtted by non-linear concentration value. If the effect of a drug on the currents exceeded regression analysis using the XL ﬁt add-in (IDBS Ltd., 20% at the highest concentration tested, then concentration– UK). Data were ﬁtted using a four-parameter logistic model response data from three to ﬁve cells were normalized to vehicle [ﬁt = (A + (B/(1 + ((x/C)∧D)))], where A = 0 and B = 100).
and 100% blocking levels and the resulting data ﬁtted with the Statistical analysis was performed using two-way ANOVA following relationship: with the Bonferroni post-test, applying the correction for mul-tiple comparison at a signiﬁcance level of p < 0.05 with Graph- Pad Prism 5 for Windows (GraphPad Software, USA). Cor- relation between assays [Pearson's coefﬁcient (r)] and values 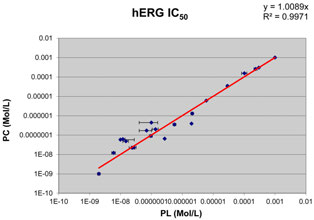