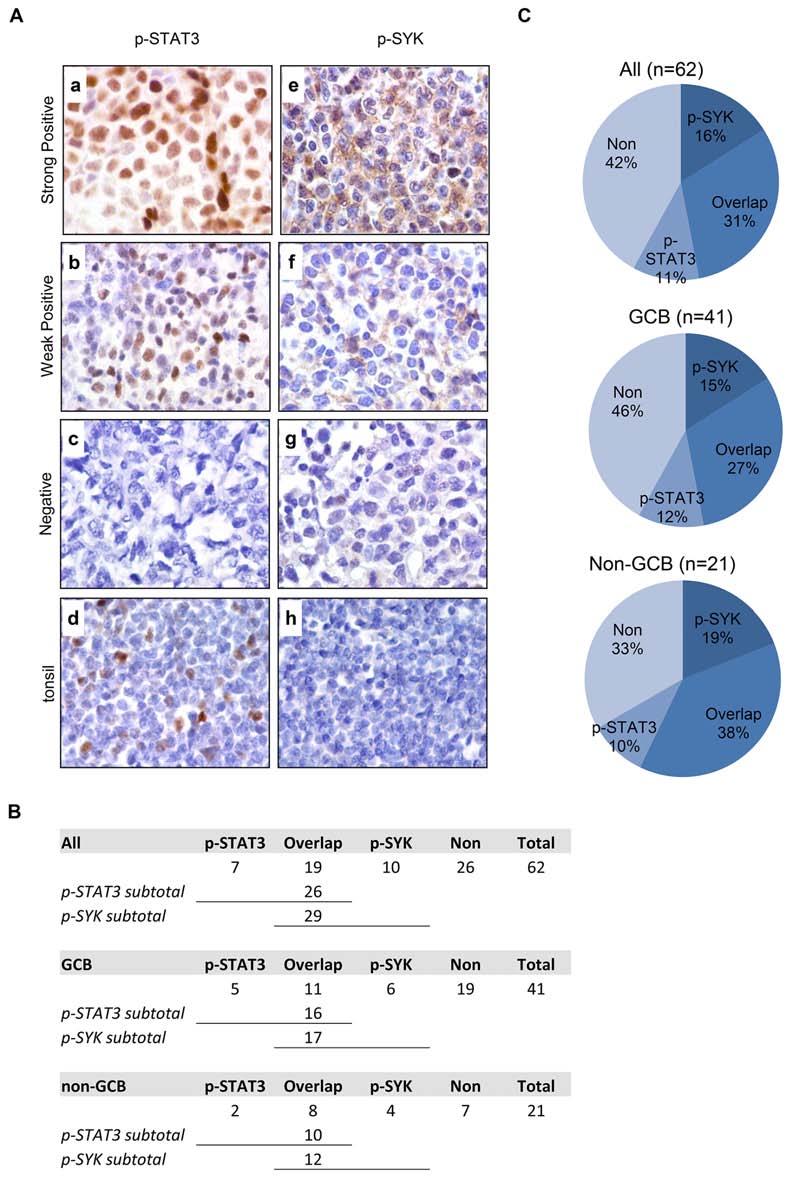 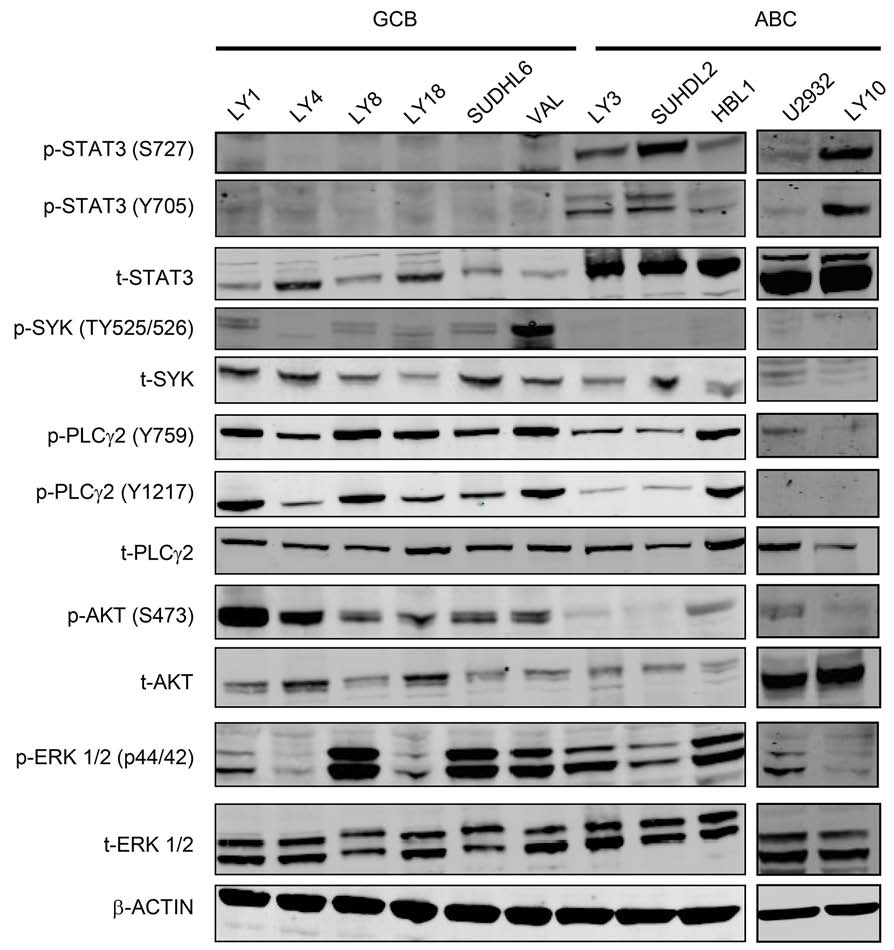 in our previous study [13]. LY4, a GCB cell line, was and LY18) and three ABC (HBL1, SUDHL2 and LY3) cell also resistant to the selective SYK inhibition due to lack lines, which were characterized further below.
of surface immunoglobulins [13]. The cell line was, however, sensitive to dual inhibition by cerdulatinib with Cerdulatinib induces apoptosis in both GCB and
an IC of 2.1 μM. Early clinical results suggest that these ABC subtypes of DLBCL cell lines via caspase 3
concentrations can be safely achieved in the plasma of and PARP cleavage
treated patients (Flinn I, et al. 2014 ASCO annual meeting Abstract #2619). Overall, the results demonstrate potent The effects of cerdulatinib on cellular metabolism and broad activity of cerdulatinib in DLBCL cell lines. (MTT) can result from either cell death or cell cycle Sensitivity to cerdulatinib was confirmed in an independent inhibition or both. We therefore analyzed the effects of cell growth assay (Figure 3C) utilizing two GCB (SUDHL6 cerdulatinib on DLBCL cell viability. Using annexin V Figure 2: Distinct signaling pathways in GCB-DLBCL vs ABC-DLBCL cell lines. Western blotting analysis of the basal
levels of total and phosphorylated STAT3, SYK, PLCγ2, AKT and ERK in GCB and ABC DLBCL cell lines. Phosphorylated residues for each protein are indicated. β-actin was included as a loading control. 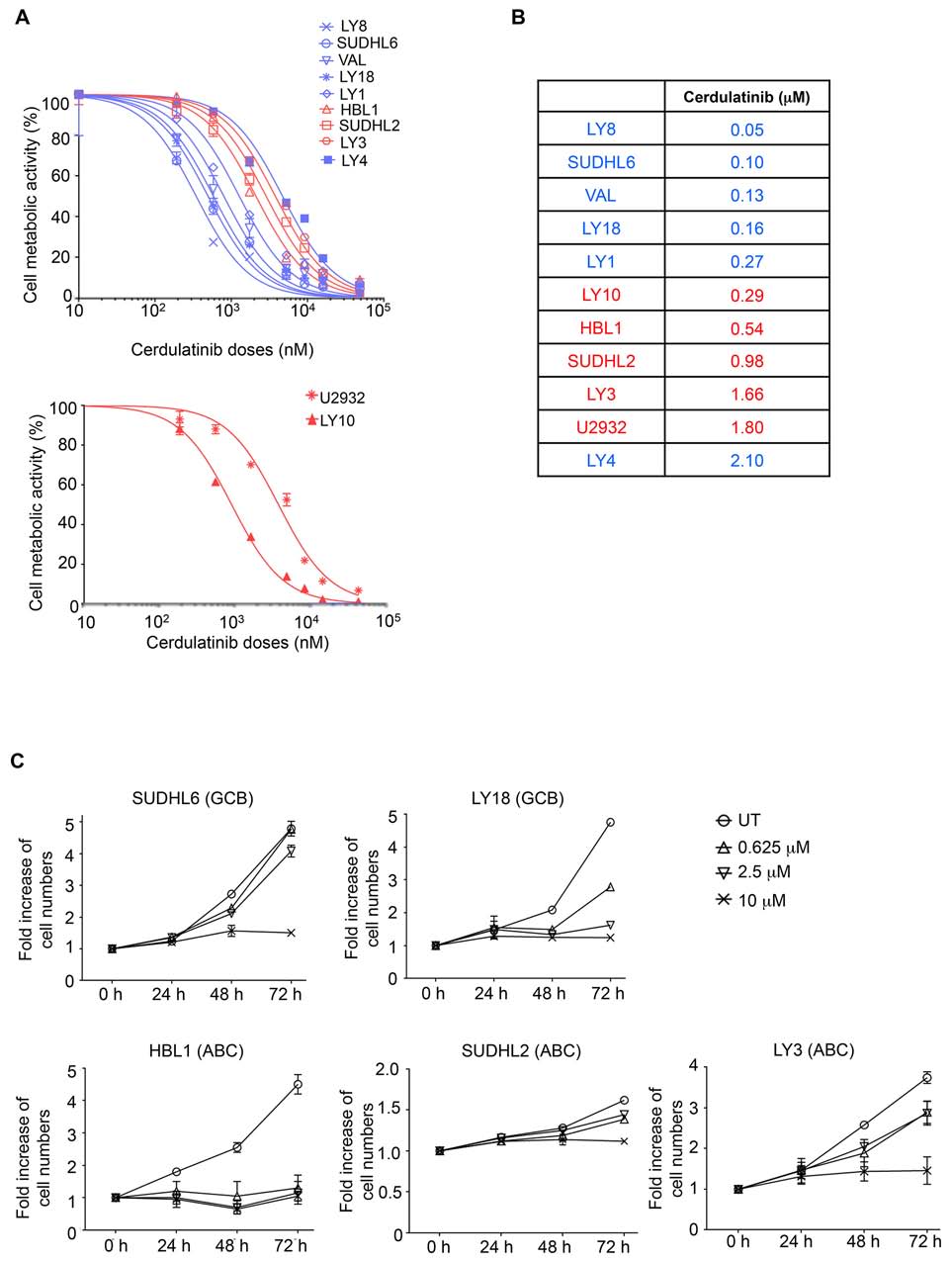 Figure 3: Both ABC and GCB subtypes of DLBCL are sensitive to dual SYK/JAK inhibition with cerdulatinib. A.
DLBCL cell lines were treated with various concentrations of cerdulatinib for 72 h followed by MTT assay. GCB are highlighted in blue and ABC in red. B. IC values were calculated using GraphPad Prism 5 software (GraphPad, La Jolla, CA). C. DLBCL cell lines were
treated with indicated concentrations of cerdulatinib for up to 72 h. Cell numbers were determined at indicated time points and normalized to vehicle treated control. Error bars represent the standard error of the mean (SEM) from three independent experiments. 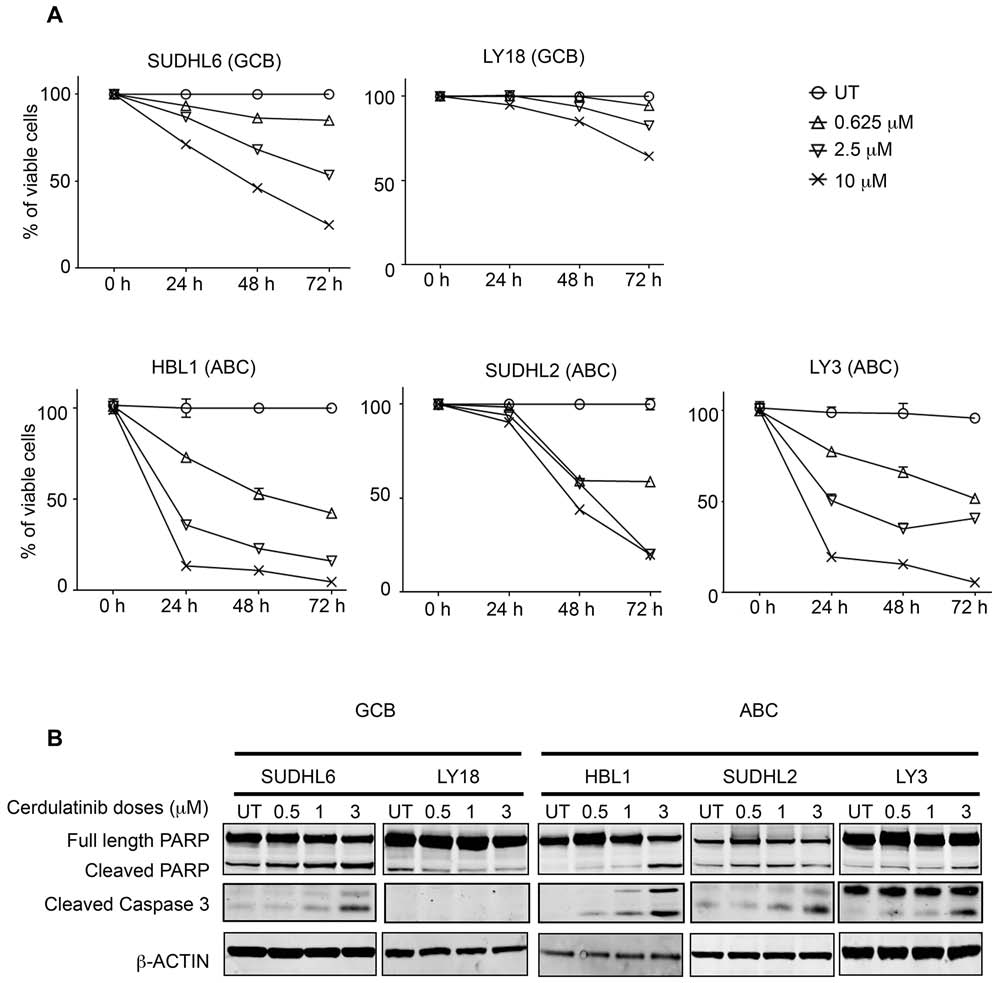 and 7-AAD double staining, we demonstrated that with Cell cycle arrest by cerdulatinib is associated
the exception of LY18, viability of all cell lines was with inhibition of RB phosphorylation and
reduced by cerdulatinib treatment in a concentration- and down-regulation of cyclin E
time-dependent manner (Figure 4A). Apoptosis induction with increasing concentrations of cerdulatinib in the four After establishing apoptosis induction as one of the responding cell lines was accompanied by both PARP and drug's actions, we then studied the effect of cerdulatinib caspase 3 cleavage whereas little changes were observed on cell cycle progression using BrdU incorporation. As in LY18 (Figure 4B).
shown in Figure 5A, DHL6, LY18 and HBL1 appeared Figure 4: Cerdulatinib induces apoptosis in both GCB and ABC subtypes of DLBCL cell lines via caspase 3 and PARP
cleavage. A. Viability of DLBCL cells treated with various doses of cerdulatinib for up to 72 h. Cells were collected at indicated time
points, and stained with annexin V and 7-AAD. Cell viability was measured using flow cytometry, and shown as the percent viable cells (annexin V-/7-AAD-) relative to vehicle treated control. Error bars represent the SEM from three independent experiments. B. DLBCL cells
were treated with indicated doses of cerdulatinib for 48 h. Western blotting was performed using antibodies against PARP and caspase 3. β-actin was included as a normalization control. 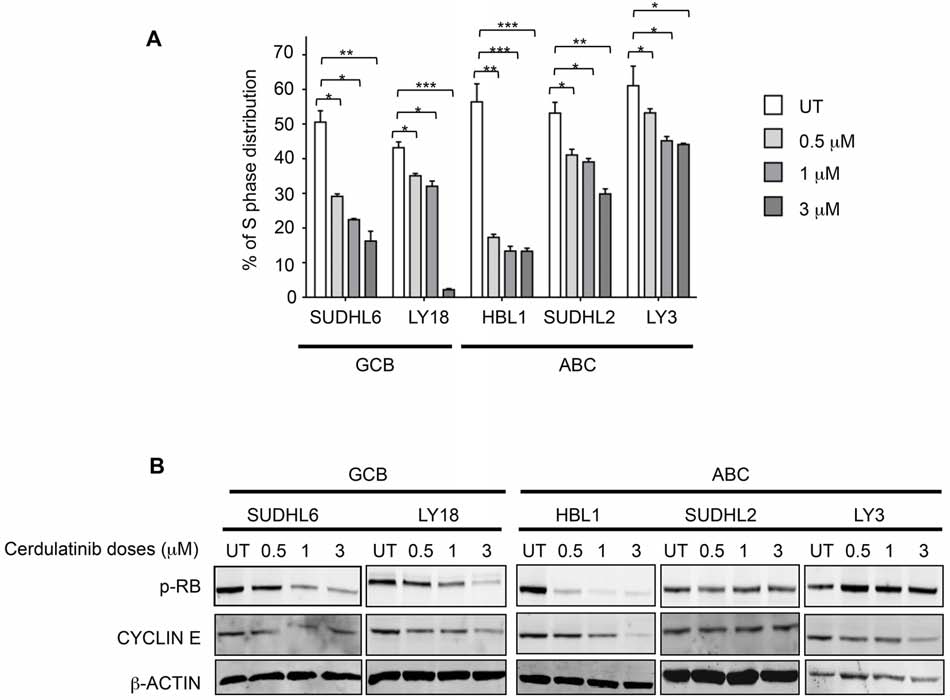 to be particularly sensitive to cerdulatinib treatment with cerdulatinib to inhibit cell cycle and induce apoptosis significant dose-dependent reduction in S phase fraction, under the condition of BCR stimulation. Figure 6A shows while the effects of the drug on DHL2 and LY3 were that BCR stimulation with anti-IgM and anti-IgG drove modest in comparison. The dose-dependent S-phase more cells into S-phase in all five cell lines regardless of reductions caused by the drug are largely consistent with subtypes and these stimulated tumor cells were sensitive its inhibition of phosphorylated RB and with decrease in to cerdulatinib treatment. Similarly, the viability of cyclin E expression (Figure 5B): While bigger changes stimulated DLBCL cells were reduced by cerdulatinib in were observed in HBL1, SUDHL6 and LY18, little all cell lines tested (Figure 6B). Taken together with the or no changes were observed in SUDHL2 and LY3. results under the resting conditions (Figure 4A and 5A), Collectively, our data on apoptosis (Figure 4) and on cell we conclude that cerdulatinib achieves its anti-tumor cycle progression (Figure 5) suggests that cerdulatinib effects in ABC and GCB DLBCL cell lines via induction achieves its inhibitory effects in different DLBCL cell of apoptosis and cell cycle arrest with or without external lines (Figure 3A and 3B, MTT assay) via different cellular processes, either induction of apoptosis or induction of cell cycle arrest.
Cerdulatinib blocks JAK/STAT and BCR
signaling in both ABC and GCB DLBCL cell
Cerdulatinib induces apoptosis and cell cycle
arrest in BCR-stimulated DLBCL cells
To determine whether cerdulatinib inhibits BCR Since the BCR pathway may be chronically active and JAK-STAT signaling pathways, we first measured in many DLBCL, we next examined the capability of the phosphorylation of SYK, PLCγ2, AKT and ERK in Figure 5: Cerdulatinib blocks cell cycle in both ABC and GCB subtypes of DLBCL via inhibition of RB phosphorylation
and down-regulation of cyclin E. A. DLBCL cells were treated with indicated doses of cerdulatinib for 48 h. Cells were labeled with
10 μM BrdU for 2 h, followed by double staining with BrdU antibody and 7-AAD prior to flow cytometry analysis. Percentage of cells at S phase was statistically analyzed using one-way ANOVA test and graphed using prism 5 GraphPad. Error bars represent the SEM from three independent experiments. *p < 0.05; **p < 0.01; ***p < 0.005. B. DLBCL cells were treated with indicated concentrations of cerdulatinib.
The whole cell lysates were prepared at 48 h following treatment. Immunoblotting was performed using p-RB and cyclin E antibodies. β-actin was included as a loading control. 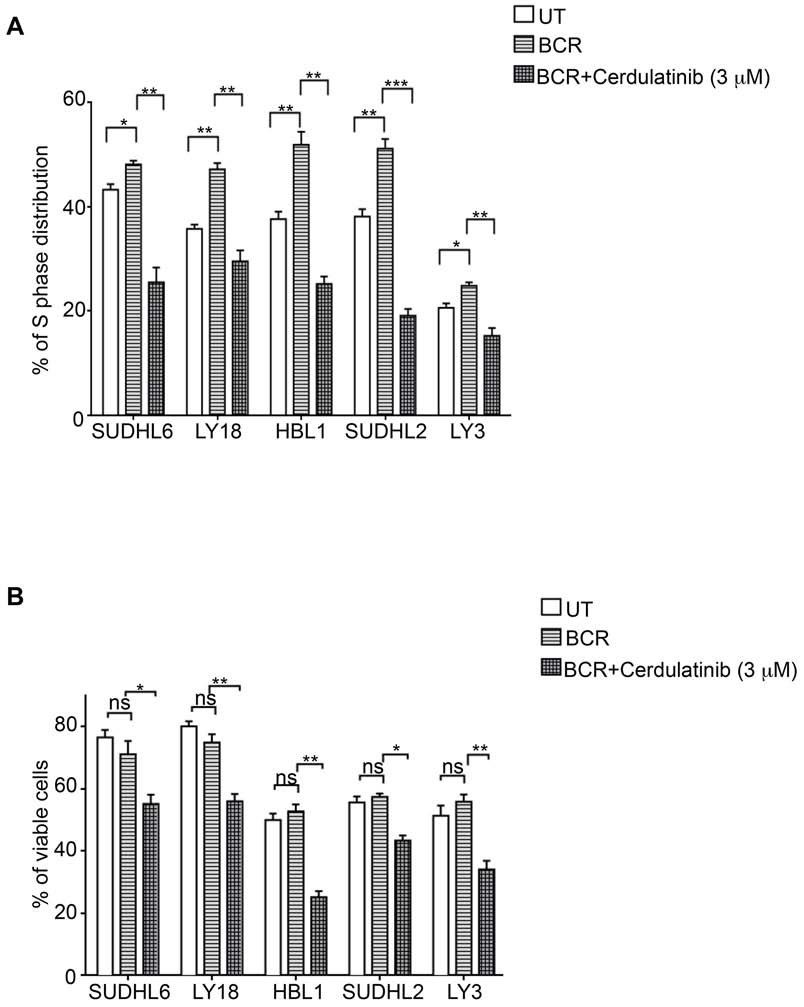 BCR-stimulated DLBCL cells treated with or without was observed: SYK, PLCγ2, AKT and ERK in DHL6; cerdulatinib (Figure 7A). Immunoblotting analyses SYK, PLCγ2 and AKT in LY18; SYK and AKT in HBL1, revealed a significant reduction of p-SYK in all cell lines, SYK in DHL2; and SYK, AKT and ERK in LY3. Thus, reduction of p-PLCγ2 in the two GCB cell lines (DHL6 despite the variability, at least one signaling component of and LY18), reduction of p-AKT in four of the five cell the BCR pathway was effectively inhibited by cerdulatinib lines (except DHL2) and reduction of p-ERK in two of the in each individual cell line.
five cell lines (DHL6 and LY3). When analyzing data by We also determined whether cerdulatinib inhibits individual cell lines, reduction in protein phosphorylation the JAK-STAT signaling pathways under the condition of Figure 6: Cerdulatinib induces cell cycle arrest and apoptosis under the condition of BCR stimulation in all DLBCL
cell lines. A. DLBCL cells were treated with 3 μM of cerdulatinib for 48 h and labeled with 10 μM BrdU for 2 h, followed by double
staining with BrdU antibody and 7-AAD prior to flow cytometry analysis. B. Following 48 hr drug treatment, cells were stained with
annexin V and 7-AAD. Percentage of viable cell relative to vehicle control or cells at S phase was statistically analyzed using one-way ANOVA test and graphed using prism 5 GraphPad. Error bars represent the SEM from three independent experiments. *p < 0.05; **p < 0.01; ***p < 0.001. 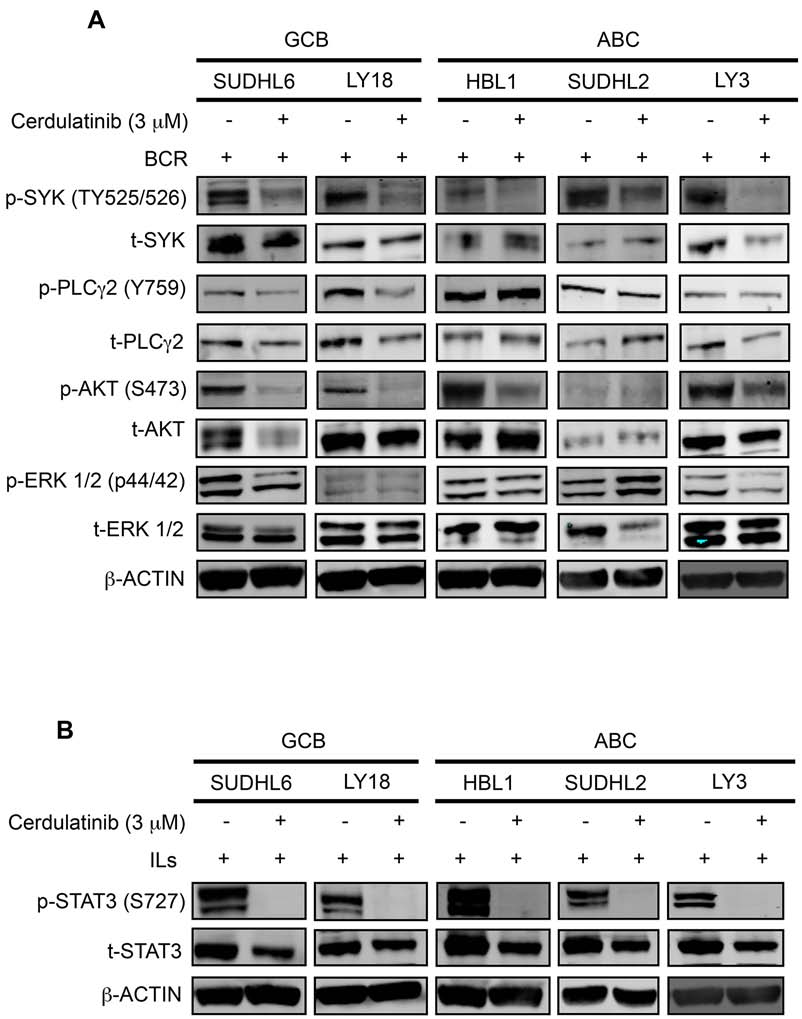 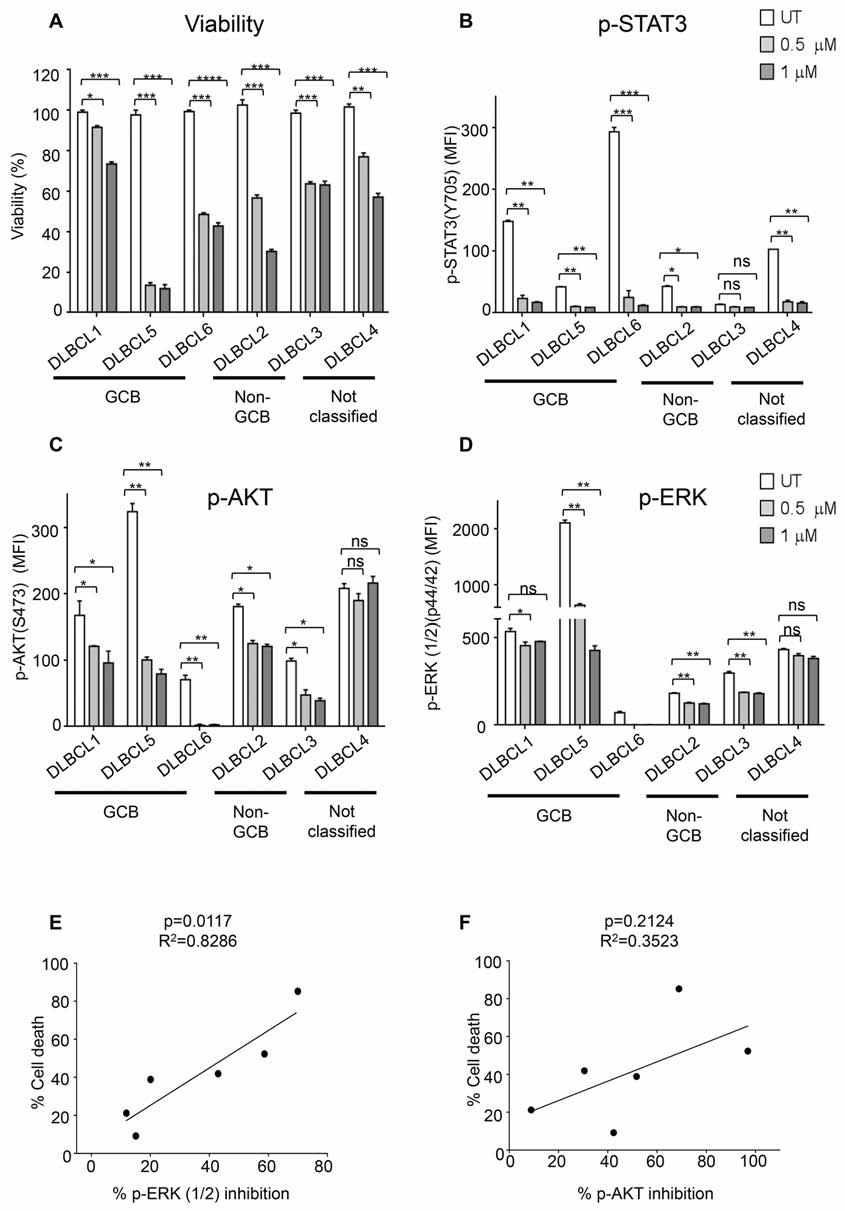 Primary prevention of cardiovascular disease with a mediterranean diet