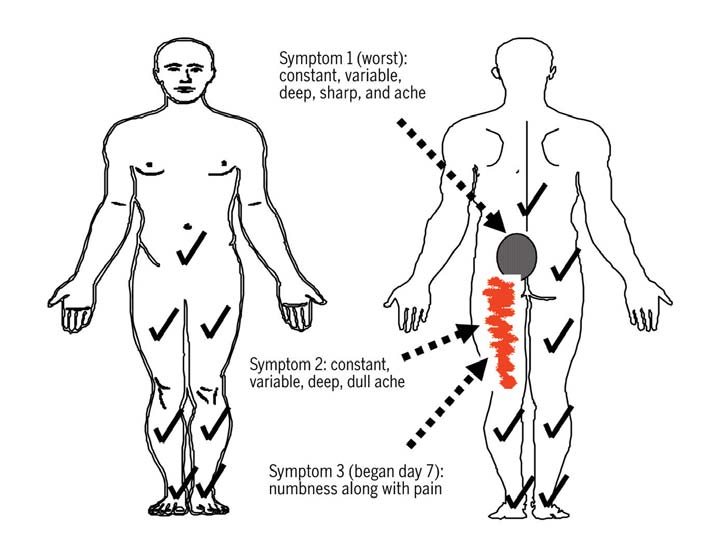 Using a treatment-based classiﬁcation
approach,6,7,18 the patient was classiﬁed
into the speciﬁc exercise classiﬁcation
and prescribed extension-oriented exer-
cises. Either standing or prone repeated
extension exercises were to be performed
every 2 waking hours, with 10 repetitions,
holding each repetition 2 to 3 seconds at
end range. Education consisted of avoid-
ance of sitting for greater than 20 to 30
minutes, avoidance of full end-range
ﬂexion positions, and the use of a lumbar
roll while sitting and wearing protective
equipment. The treating physical thera-
pist, who had privileges for prescribing
nonnarcotic medication,5 prescribed 7.5
mg Meloxicam (Mobic, 2 tablets once
daily) and 500 mg acetaminophen (Tyle-
nol, 2 tablets every 4-6 hours, as needed)
for pain relief during performance of his
<?=KH;'$Body chart of symptoms at initial presentation through day 9.
military duties. Because this patient was recent trauma, and had no history of cancer back, left buttock, and left posterior thigh essential to the success of his unit's mis- or infection. In screening for nonmusculo- at the end range of motion. Lumbosacral sion, only a home exercise program was skeletal pathology, the patient reported no extension and side bending were within prescribed, and a follow-up was sched- history of cancer, cardiovascular, or pul- normal limits, without an increase in uled for 2 weeks later. He was instructed monary disease, and no recent occurrence pain from his baseline NPRS. Repeated- to return to the clinic at an earlier time of nausea, vomiting, fever, changes in ap- motion testing was performed as de- for re-evaluation if symptoms worsened.
petite, difficulty swallowing, shortness of scribed by McKenzie.35 Ten repetitions The patient presented for follow-up on breath, dizziness, or changes in balance.
of ﬂexion in standing increased his back, day 4 (3 days after the initial evaluation) buttock, and posterior thigh pain, while with a complaint of increased pain unre- Test and Measures
10 repetitions of extension in standing lieved by positioning and only short-term The patient was neurologically intact reduced those symptoms. Straight-leg relief with the home exercise program.
bilaterally with 5/5 strength as assessed raise tests did not produce radicular pain His baseline NPRS at rest had increased with manual muscle testing26 through- but caused a severe increase in LBP at 15° to 6/10. He reported a decreased NPRS out the L2 to S1 myotomes, sensation of hip ﬂexion on the right and 45° of hip to 4/10 after performing home exercises, was intact to light touch throughout the ﬂexion on the left. Hip ﬂexion range of but he would return to baseline after ap- L2 to S1 dermatomes, and knee jerk and motion during single knee to chest was proximately 30 to 60 minutes. Since the ankle jerk muscle stretch reﬂexes were within normal limits bilaterally, with in- initial evaluation, he had continued to 2+ (normal). Babinski reﬂex testing was creased LBP that was approximately 50% perform all of his duties, including ex- negative. He presented with decreased less than with straight-leg raise testing.
tended wear of protective equipment.
lumbar lordosis and a guarded, obviously A lumbar quadrant test was negative bi- The physical examination, including the painful, movement of the spine. The pa- laterally. Passive vertebral motion testing, neurological examination, did not differ tient displayed a left-sided antalgic gait, as described by Maitland,34 produced lo- from the initial evaluation, with the ex- with decreased left hip extension and cal pain at L3, L4, and L5 with central ception of increased pain with all testing.
early termination of the stance phase of passive posterior-anterior accessory in- His case was discussed with a physician the gait cycle. Active range of motion was tervertebral motion (PAIVM). Unilateral and he was prescribed a narcotic pain severely limited in lumbosacral ﬂexion, PAIVM testing produced local pain at medication for use as needed, re-educat- with the ability to reach only the mid- L3-4, L4-5, and L5-S1, equal bilaterally.
ed in the home exercises to ensure proper anterior thigh region with the ﬁngertips, No referral of pain was noted with pas- performance, and instructed to continue and moderate to severe pain in the low sive accessory movement assessment.
the home exercises as tolerated. The pa- journal of orthopaedic & sports physical therapy volume 39 number 7 july 2009 543 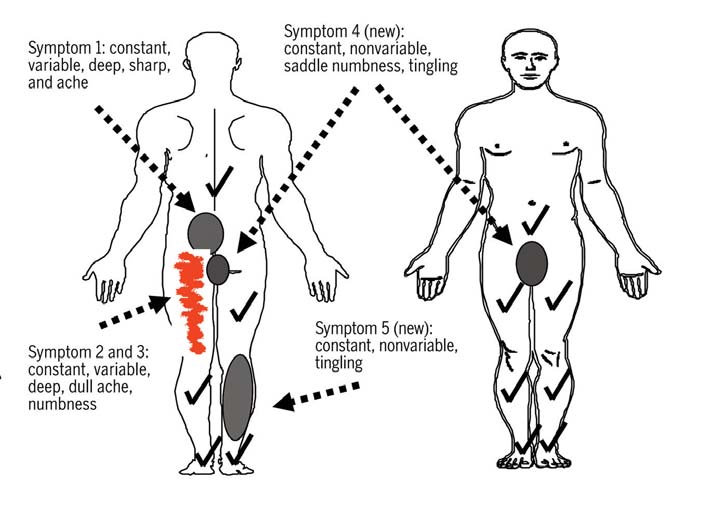 VERBENACEAE The Verbenaceae consists of herbs, shrubs or trees, with square stems and opposite or rarely alternate leaves. The flowers are similar to those of the Lamiaceae except that the ovary is entire, with the style proceeding from the top, and the flowers are in racemes or cymes rather than in verticils. The fruit is dry or succulent usually shorter than the persistent calyx, 2- or 4-celled with one seed in each cell.