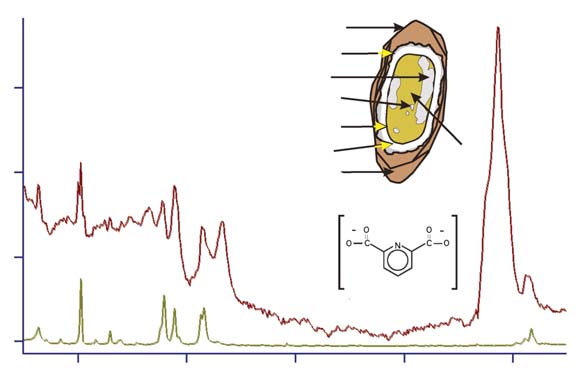 Detecting Bacillus Spores by Raman and Surface-Enhanced Raman Spectroscopy (SERS) Raman spectroscopy has been employed to detect Bacillus cereus
spores, an anthrax surrogate, collected from a letter as it passed
Intensity (arbitrary units) through a mail sorting system. Raman spectroscopy also has the
capability to identify many common substances used as hoaxes. A
Calcium dipicolinate three-step method also is decribed for the detection of dipicolinic
acid extracted from surface spores by SERS.
Stuart Farquharson, Wayne Smith, Carl Brouillette, and Frank Inscore
Figure 1. Raman spectra of (a) Bacillus cereus spores and (b) calcium dipicolinate.
mmediately following the September other bacteria and from each other (1,2).
Conditions: 500 mW of 1064 nm at the sample, 5-min acquisition time.
11, 2001 terrorist attacks, four letters From this bioterrorist attack, it became Icontaining anthrax causing spores clear that considerably faster methods of
were mailed through the U.S. postal sys- analysis were required. This would expe- in the form of hoax letters (5–7). Literally very small samples can be measured with- tem infecting 22 individuals, five fatally.
dite assessment of the scale of an attack as tens of thousands of letters containing out preparation. The sample need only be The anxiety caused by this bioterrorist well as the extent of facility contamina- harmless powders have been mailed to placed at the focal spot of the excitation attack was exacerbated by the extensive tion. This information, in turn, could be create additional fear (8). Consequently, laser and measured. Moreover, the rich time required for positive identification used to minimize fatalities, because it was an analyzer must not only be able to dif- molecular information provided by of the Bacillus anthracis spores and the learned that if exposure is detected with- ferentiate B. anthracis spores from other Raman spectroscopy usually allows unknown extent of their distribution in the first few days, the majority of vic- biological materials, but must be able also unequivocal identification of chemicals along the east coast. The delay in identi- tims can be treated successfully using to identify these harmless powders to and biochemicals. As early as 1974, the fication was due to the fact that spores ciprofloxacin, doxycycline, and penicillin eliminate fear and potentially costly Raman spectrum of Bacillus megaterium had to be germinated and grown in cul- G procaine (3). However, the challenges shutdowns (9).
was measured and shown to be domi- ture media to sufficient cell numbers so of developing such an analyzer are formi- In the case of postal-targeted terror- nated by calcium dipicolinate (CaDPA, that the 16S rRNA gene unique to B. dable considering that the CDC estimates ism, we have been investigating the 14). This chemical can be used as a signa- anthracis could be measured. Conse- that inhalation of 10,000 anthracis utility of Raman and surface-enhanced ture since only spore forming bacteria quently, the Center for Disease Control endospores or 100 nanograms will be Raman spectroscopy (SERS) to meet contain CaDPA, at 10% by weight and Prevention (CDC) employed a com- lethal to 50% of an exposed population the analytical challenges of speed, sen- (15–17), and the most common spores, bination of biological analyses of culture (4). An additional challenge has emerged sitivity, and selectivity by identifying such as pollen and mold spores, do not.
grown colonies and polymerase chain since the 2001 attacks, in that a secondary visible and invisible particles on sur- The ability of Raman spectroscopy to reactions to differentiate bacilli from type of postal-terrorism has proliferated faces, respectively (10–13).
measure and identify spores is exempli-fied in Figure 1. Here an 1-mm3 spec Stuart Farquharson is president and CEO, Wayne Smith is vice-president of
Raman Spectroscopy — Bacilli
( 100 mg) of Bacillus cereus spores, a Raman products, Carl Brouillette is a senior instrument design engineer, and
Spores and Hoax Materials
nontoxic surrogate for B. anthracis spores, Frank Inscore is a senior Raman applications specialist, all with Real-Time Analyzers,
Raman spectroscopy is attractive because was placed on a glass surface, positioned Inc. (East Hartford, CT). E-mail: [email protected] 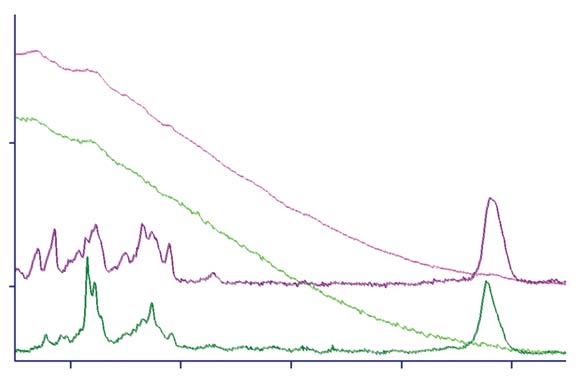 at the focal point of a 1064-nm excitation cm-1 is composed of overlapping, non- laser, and measured in 5 min using an FT- specific organic CH2 and CH3 stretching Raman spectrometer. Comparison of this modes. The relative intensities of the spectrum to that for CaDPA shows that protein bands can be further used to dif- the characteristic peaks of the latter at 821, ferentiate between bacilli using chemo- 1014, 1391, 1446, 1573, and 3080 cm-1 are metric approaches (20 ).
observed readily in the former. These The same FT-Raman spectrometer peaks can be assigned to a CH out-of- was used to measure and differentiate plane bend, the symmetric pyridine ring some 100 common powders as potential stretch, an OCO symmetric stretch, a hoax materials (11). During these meas- symmetric ring CH bend, an asymmetric urements, it was found that many com- OCO stretch, and the aromatic CH asym- mon powders, such as coffee creamer and metric stretch, respectively.
household cleaners, fluoresce at visible The B. cereus spore spectrum also laser excitation wavelengths, even at 785 contains peaks at 1003, 1241, and 1666 nm. This was true also for both white and cm-1 that are characteristic of proteins.
brown envelope paper that is found com- Specifically, these peaks correspond to monly as debris on sorting machines.
the phenylalanine ring breathing mode, Fortunately, obscuration of the Raman and the amide III and amide I stretching spectrum by fluorescent emission can be modes of peptide linkages, respectively avoided using 1064 nm laser excitation, (18,19). The most intense peak at 2935 and high quality spectra can be obtained Intensity (arbitrary units) Figure 2. Raman spectra of (a) and (c) flour and (b) and (d) brown envelope paper.
Conditions: (a) and (b) 785 nm, (c) and (d) 1064 nm, all 500 mW, 5-min acquisition
time. 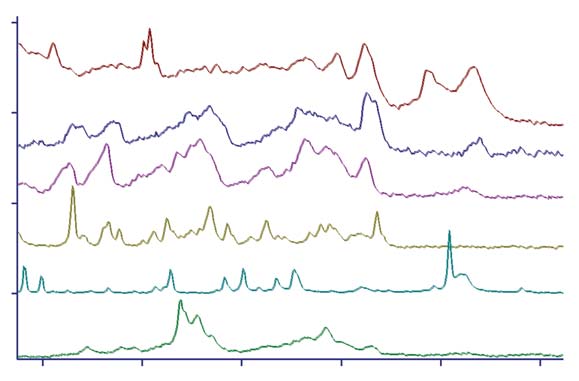 stants, particle size, and irradiation wave- allowed to dry to mimic a contaminated length must be satisfied to generate the surface. A 100-µL drop of 50 mM DDA plasmon field. Furthermore, the amount in ethanol heated to 78 °C was added to of interaction between the metal plas- the surface. After 1 min, approximately mon field and molecule will influence the 10 µL of the solution was drawn into a 1- amount of enhancement.
mm diameter glass capillary containing a For the present application, it has been 1-cm plug of silver-doped sol-gel. The shown that dipicolinic acid (DPA), the SER spectrum of DPA collected in the acid form of CaDPA, produces an intense SER-active capillary was then measured SER spectrum when it interacts with the using a Raman spectrometer. Figure 4c Intensity (arbitrary units) plasmon field of silver nanoparticles shows a representative spectrum from (Figure 4), and it is, therefore, suitable as a one of these capillaries using 150 mW of signature for bacilli spores (12,13). The 785 nm laser excitation and a 1-min SER spectrum of 1 mg/L DPA in water is acquisition time. The primary DPA similar in intensity to the Raman spec- peaks at 657 cm-1, 812 cm-1, 1006 cm-1, trum of a saturated solution of DPA (80 1381 cm-1, and 1426 cm-1 are observed g/L DPA in 1 N KOH). Taking into readily. The DPA signal intensity is simi- account sample concentration, laser lar to the 1-mg/L sample obtained in Figure 3. Raman spectra of (a) B. cereus spores, (b) creamer, (c) flour, (d) sugar, (e)
power, and signal intensity, the 1000 cm- water, and suggests that 10 ng DPA were aspirin, and (f) paper. Conditions: as in Figure 1. Note that each powder produces a unique set of Raman spectral peaks.
peak intensity is enhanced by 9.3 × 105.
collected in the 10-µL sample. Assuming In addition to the increase in intensity, that a spore contains approximately 10% some of the peaks shift and change inten- DPA by weight, this sample corresponds in 5 min or less (Figure 2). Once a suspi- also is important to be able to measure sity due to the molecule to plasmon field to 100 ng of spores, or for the entire 100- cious powder is measured, a simple spores on surfaces to assess the scale of interaction. Specifically, the following µL drop of DDA, 1 µg of spores. This chemical identification algorithm can be contamination. Such measurements Raman to SER spectral peak shifts occur: suggests that 10% of the original sam- used to match the sample spectrum one- would be useful in establishing the path 652 to 657 cm-1, 822 to 812 cm-1, 1001 to ple was collected. This low percentage for-one to a spectrum contained in a that a spore-containing letter has taken 1006 cm-1, 1386 to 1381 cm-1, 1438 to could be due to inefficient collection of library in less than 1 second (21). One of from destination back to the source, 1426 cm-1, and 1572 to 1567 cm-1.
the sample from the surface, incomplete the advantages of Raman spectroscopy is what processing equipment handled the However, to obtain SERS of DPA, it degradation of the spores by DDA, or the fact that virtually every chemical pro- letter, and to what extent individuals must be extracted from spores and inefficient transfer of the DPA to the sil- duces a unique spectrum, for example, may have been exposed or are at risk.
brought in contact with the plasmon ver particles. Nevertheless, the signal-to- creamer, flour, sugar, and aspirin — the These measurements may also be valu- field. Recently, a relatively fast method noise ratio (S/N) of 125 for the 1006 cm- powders most often suspected as B. able in facility clean-up operations.
using hot dodecylamine (DDA) has been 1 peak in the SER spectrum suggests a anthracis spores (Figure 3). It is worth Surface-enhanced Raman spec- developed to break apart spores and limit of detection (defined as S/N = 3) of noting that the x-axis invariability of an troscopy offers the possibility of detecting release DPA (23). In addition, silver approximately 25 ng of B. cereus spores interferometer-based Raman spectrome- just hundreds of spores per square cen- doped in a porous glass structure (sol- (2500 spores) in 100 µL DDA.
ter makes such search and match algo- timeter. SERS involves the formation of a gel) has been developed as a SER-active Improvements in sample collection rithms reliable (22).
metal surface plasmon field generated by material for chemical separation (24).
and/or transfer should allow detection irradiation with light. The efficiency of These developments were combined to of spores in the hundreds-per-square- Raman scattering of a molecule interact- perform the following three-step meas- centimeter range. Finally, it is worth Spectroscopy — Bacilli Spores
ing with this field can be enhanced by six urement. A 10-µg sample of B. cereus noting that the sol-gel appeared to Although an analyzer capable of identi- orders of magnitude or more. However, spores was spread over a 10-cm2 glass have the desired effect of excluding fying suspicious powders has value, it strict requirements of metal optical con- surface with the aid of methanol and other bacterial cell material from 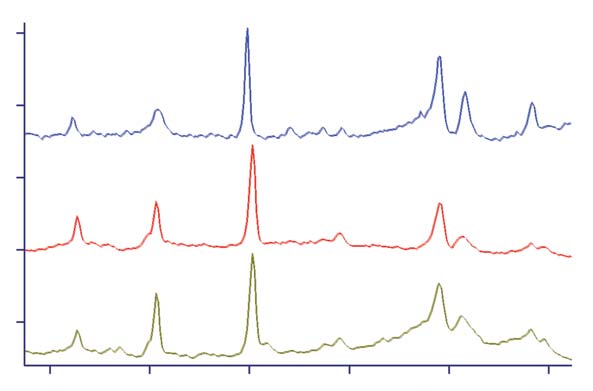