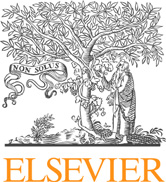 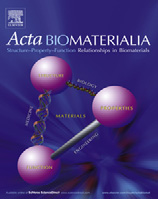 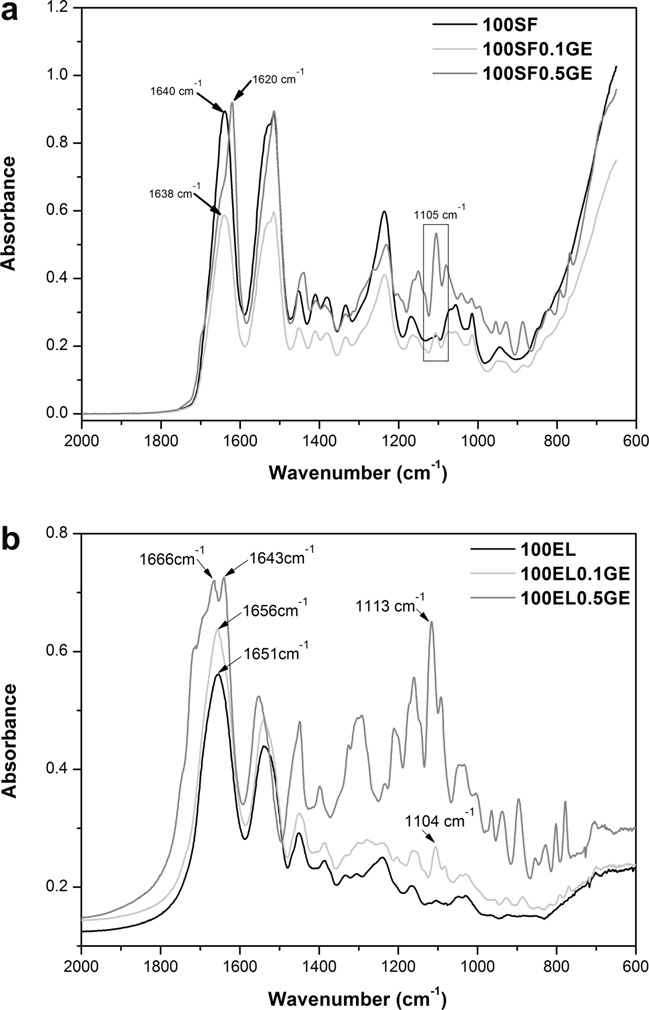 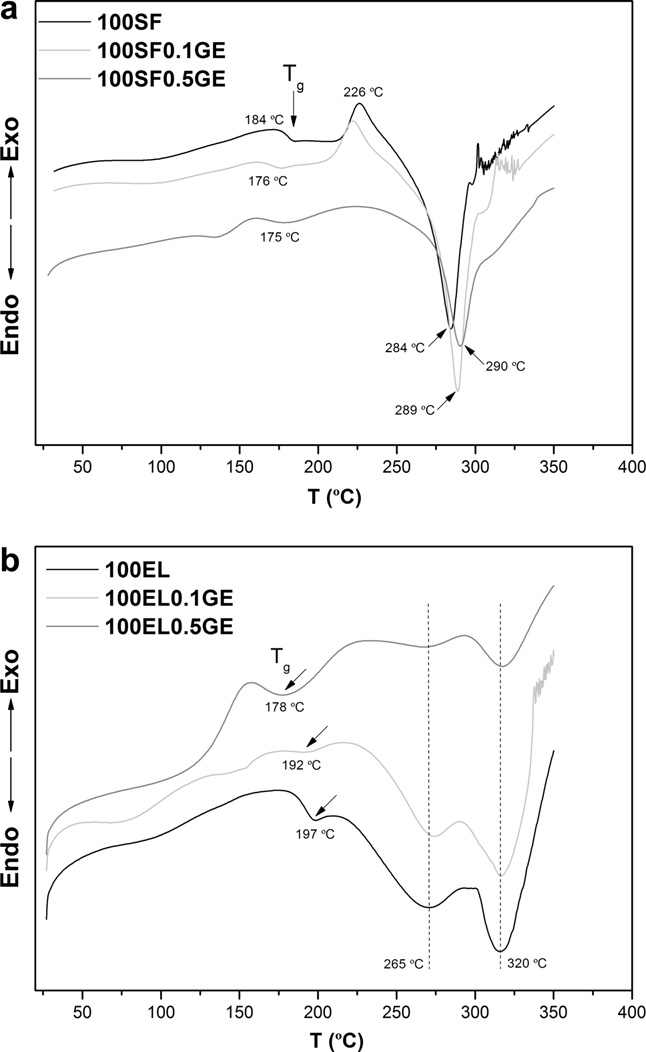 A. Vasconcelos et al. / Acta Biomaterialia 8 (2012) 3049–3060 Fig. 1. FTIR absorbance spectra (a) of pure silk ﬁbroin (100SF) and (b) pure elastin(100EL) and crosslinked with genipin (100X0.1GE and 100X0.5GE, where X is SF orEL).
Fig. 2. DSC scans of (a) pure silk ﬁbroin (100SF) and (b) pure elastin (100EL) andcrosslinked with genipin (100X0.1GE and 100X0.5GE, where X is SF or EL).
scaffolds (Data not shown) show no additional changes, for both The thermal behavior of 100SF is typical of an amorphous SF proteins, when compared with genipin crosslinked spectra.
with random coil conformation as previously shown by FTIR re- FTIR spectra of blend systems show slightly changes of the sults. Addition of genipin induces a small decrease in the Tg and wavenumbers and on the areas of the bands due to mixing effects an increase in the decomposition temperature. The increase in of SF with elastin. The areas under the peaks for pure and blend the thermal stability, given by the increase in Td, of 100SF scaffold systems were calculated by integration, and the ratio AN–H (area containing genipin is due to the increase in the extent of covalent of N–H bending, amide II) to [email protected] (area of [email protected] stretching, amide crosslinks. This fact is the conﬁrmation of the crosslinking reaction I) (data not shown). It was shown that the addition of elastin between genipin and SF. Furthermore, the exothermic peak at decrease the ratio of AN–H/[email protected] Moreover, the area of C–O–C, 226 °C shifts to lower temperature (100SF0.1GE) and disappears attributed to genipin, increases along with the ratio AN–H/[email protected] for the sample 100SF0.5GE. This result shows once again the due to the carboxyl group from genipin. This fact is evidence of change in the SF conformation from random coil to b-sheet after the crosslinking reaction. The higher decrease in the ratio AN–H/ genipin crosslinking, and how this change is affected by the con- [email protected] obtained for the blend systems is the combined effect of addi- centration of crosslinking agent.
tion of elastin and genipin crosslinking.
The DSC curve of elastin b) shows an endothermic shift at The interaction between SF and elastin, crosslinked with geni- 197 °C assigned to the glass transition temperature of soluble pin, was further investigated using thermal analysis (DSC). DSC elastin peptides The thermogram is further characterized by scans for SF and elastin are shown in and b respectively.
a weak and broad endothermic peak at 265 °C, related to the The DSC curve for 100SF shows an endothermic shift at 184 °C that decomposition of small aggregated structures and a more intense corresponds to the glass transition temperature (Tg) of SF. This endothermic peak at 320 °C related to a component decomposition value is in the range of others previously reported for SF with a at high temperature. Addition of genipin caused the decrease in the random coil conformation . The exothermic peak at 226 °C Tg and, although it was not observed, an increase in the decompo- is related to the crystallization of amorphous SF chains caused by sition temperature (320 °C); the weak peak at 265 °C progressively the transition to b-sheet structure The DSC curve of disappears with the addition of genipin. This fact indicates that the SF is also characterized by an intense endothermic peak at 284 °C small aggregates disappeared due to the crosslinking reaction be- (Td) related to the decomposition of SF chains.
tween genipin and elastin. In the blend system (data not shown) 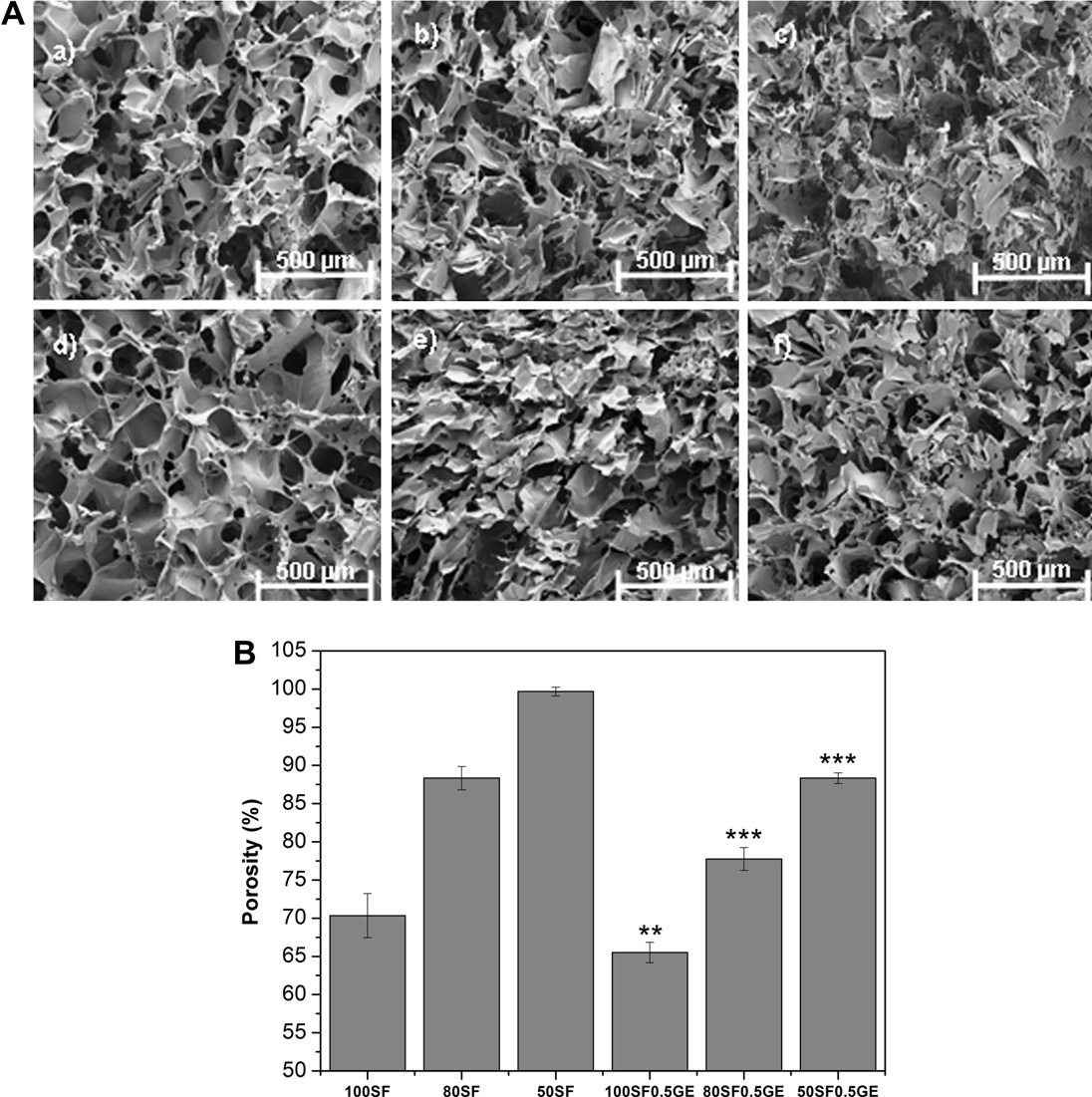 A. Vasconcelos et al. / Acta Biomaterialia 8 (2012) 3049–3060 an increase in the decomposition temperature is observed, the interaction between genipin and SF with conformational suggesting once again the crosslinking effect. Nevertheless, the in- changes that are patent of the scaffold morphology already con- crease in Td is not dependent on blend composition because blends ﬁrmed by FTIR and DSC results. In the blended system, it can be with higher crosslinking degree will not have higher thermal seen that the loose network obtained upon addition of elastin becomes more closed and compact due to genipin crosslinking.
The 3-D morphology of the SF/EL scaffolds was analyzed by The ﬁbrils observed in 50SF scaffold disappeared after crosslinking, SEM. The images presented are related to control and crosslinked originating thicker walls (f).
Porosity measurement of scaffolds was done by the liquid dis- (a) shows a disordered pore-like structure with a rough sur- placement method, using hexane as a displacement liquid. Hexane face. The pores are interconnected by a number of even smaller was used because it permeates easily through the interconnected pores. Addition of elastin creates a more open and loose structure scaffold pores, causing negligible swelling or shrinkage. Porosity with thinner walls (b and c). In the case of 50SF a ﬁbr- determination is important in tissue engineering as a highly porous ilar structure can be observed. The presence of large pores in the structure provides much surface area that promotes better cell scaffolds facilitates cellular inﬁltration and growth within the growth through the easer passage of nutrients to the growing cells.
3-D structure However, such a loose network will have All the scaffolds, without genipin crosslinking, showed porosity detrimental effects on mechanical, swelling and release properties.
ranging between 100 and 70%, as shown in B. Addition of To overcome this, genipin crosslinking was performed and the elastin increases the porosity of the scaffolds as can be seen by results clearly evidenced that genipin changes the scaffold mor- SEM analysis A). Crosslinking with genipin signiﬁcantly phology. 100SF0.5GE scaffold (shows a more ordered pore (p < 0.001) decreases the porosity of the SF/EL scaffolds, and the structure interconnected between sheets, characteristic of a porosity increases accordingly to the elastin content in the scaffold.
b-sheet conformation In addition, the SEM images ob- Water-binding of scaffolds is an important parameter of tained after methanol treatment (data not shown) show the same biomaterials properties. To study the swelling ratio in response morphology observed with genipin crosslinking. This result shows to external pH conditions, SF/EL scaffolds were immersed in PBS Fig. 3. (A) SEM images of SF/EL scaffolds without genipin: (a) 100SF, (b) 80SF and (c) 50SF; after genipin crosslinking: (d) 100SF0.5GE, (e) 80SF0.5GE and (f) 50SF0.5GE. (B)Porosity percentage of SF/EL scaffolds. Each column represents the average ± SD (n = 3) (signiﬁcant differences between non-crosslinked and crosslinked samples at ⁄⁄p < 0.01and ⁄⁄⁄p < 0.001). 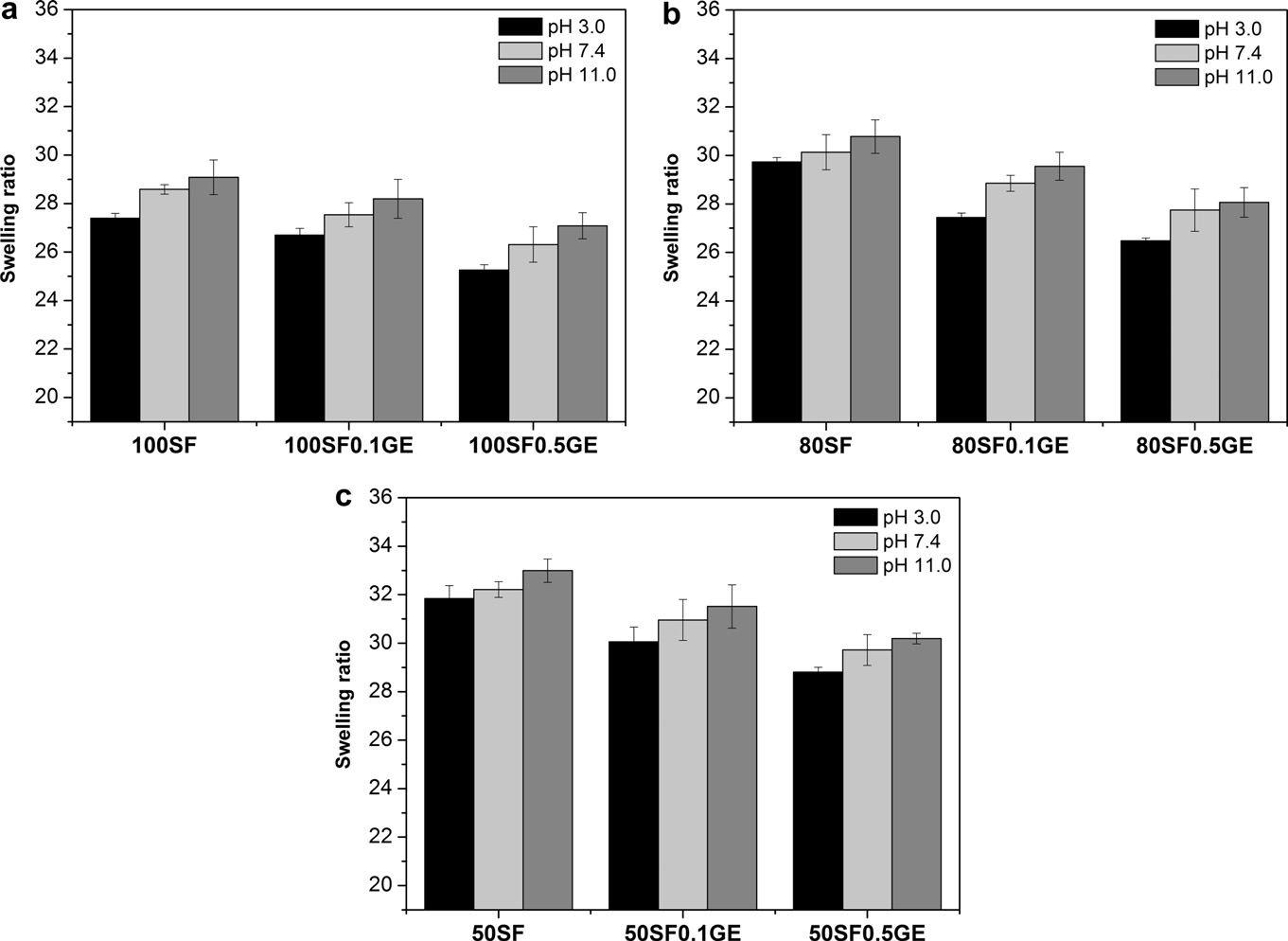 A. Vasconcelos et al. / Acta Biomaterialia 8 (2012) 3049–3060 buffer solutions at pH 3, 7.4 and 11 for 24 h at 37 °C and the results correlated with the scaffold compact structures formed after cross- are presented in . The swelling ratio of SF/EL scaffolds was lower in acidic conditions and became progressively higher at neu-tral and alkaline media. The lowest swelling ratio obtained at pH 3 3.2. In vitro and ex vivo biological degradation might be attributed to the formation of hydrogen bonds betweenSF and elastin due to the presence of carboxylic acid groups Degradation rate of matrices plays an essential role in the deter- (–COOH) and hydroxyl groups (–OH). Increasing the pH, the car- mination of the release of entrapped bioactive agents. The in vitro boxylic acid groups became ionized (–COO) and consequently, degradation of SF/EL scaffolds was investigated by incubation in a higher swelling ratios are observed due to a higher swelling force isotonic, physiological pH solution (PBS, pH 7.4) and a protease rich induced by the electrostatic repulsion between the ionized acid medium (PPE and human exudate from chronic wounds) at 37 °C for several days. At determined time points, samples were removed The swelling ratio was found to be dependent on the composi- and washed with distilled water, dried and weighed to determine tion; 50SF scaffolds, with and without genipin, showed maximums the extent of degradation using Eq. The results are presented in swelling ratios ). SEM analysis indicates that 50SF Scaffolds incubated with PBS solution showed almost no samples presented larger pores with a loose network, still observed degradation within 21 days. From the results it can be seen that after crosslinking, which results in a higher hydrodynamic free the degradation is dependent on scaffold composition. Higher volume to accommodate more of the solvent molecules, thus weight loss was obtained for samples containing higher amounts increasing scaffold swelling .
of elastin. After 21 days of incubation, the weight loss obtained Crosslinking with genipin also affects the swelling ratio of the for 100SF, 80SF and 50SF in PPE solution was 26, 36 and 49% scaffolds. Increasing genipin concentration leads to a decrease in respectively. The low weight loss obtained for 100SF is related to the swelling ratios. Generally, the swelling behavior of the scaf- the crystallinity of ﬁbroin due to the presence of b-sheet struc- folds can be controlled by its composition and crosslinking degree.
tures. Therefore, the observed weight loss is probably due to the In the SF/EL scaffolds, genipin crosslinking created stable struc- degradation of the small hydrolytically peptide sequences that tures that hinder the mobility and relaxation of the macromolecu- remain after scaffold crystallization . Nevertheless, this effect lar chains, lowering the swelling ratio due to water restrict is minimized after genipin crosslinking that increases the b-sheet mobility . This effect is more pronounced in 80SF and 50SF content, creating a closed and compact scaffold network d).
scaffolds that attained higher crosslinking degrees when compared This will diminish the diffusion of solution within the scaffold, with 100SF. The decrease in the swelling ratio can also be increasing the resistance to protease degradation. The higher Fig. 4. The pH-dependent swelling ration of 100SF (a) 80SF, (b) and 50SF (c) scaffolds after 24 h of immersion in buffer solutions at 37 °C determined by Eq. 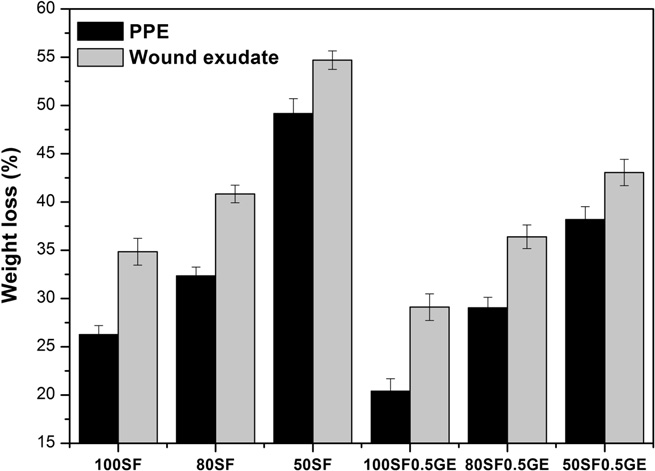 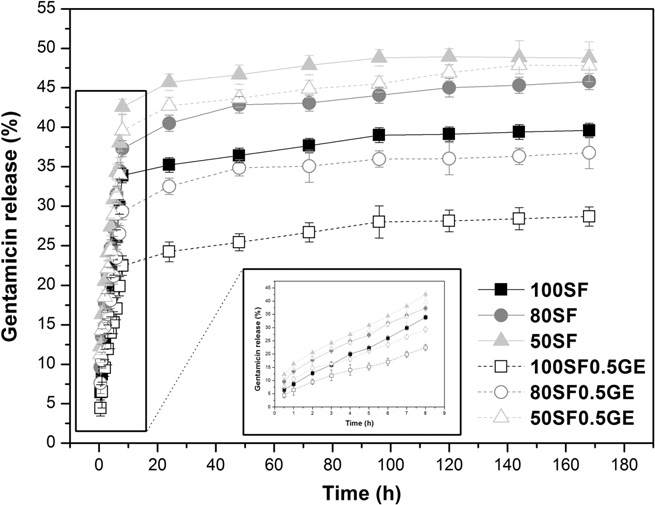