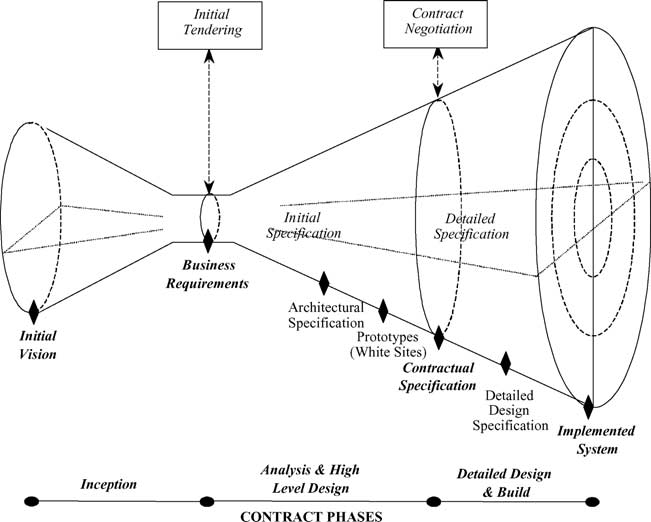 OPEN PROCESS SUPPORT FOR WEB DEVELOPMENT Figure 1. Contractual phases against the development process.
2.6. Web development processes Although there has been an emerging consideration of specific design approaches forweb systems as well as certain aspects of the process such as handling of requirements,the overall process has barely been considered. In particular, there has been little atten-tion given to how conventional approaches need to be adapted to suit web projects. Forexample, although there has been some consideration given to using lightweight devel-opment processes for web development [Angelique 1999; Fournier 1999; Haggard 1998]the consideration of web-specific issues has been superficial. One of the approaches re-ceiving the most attention is the use of XP (eXtreme Programming) [Beck 2000]. Whenused in conventional software development, it has been claimed that XP is particularlyeffective for projects that are initially ill-defined – a characteristic of many web projects.
As a result, many of the proponents of XP and similar approaches see it is an ideal ap-proach to be adopted for web development. There are, however, certain problems thatrestrict approaches such as these to web projects. The first is that a number of studies(see, for example, [Martin 2000; Siddiqi 2000]) have shown that approaches such as XPonly work effectively for projects that have cohesive development teams – something of-ten not true with web teams due to their multi-disciplinary background which combinesboth technical and creative design elements. XP can also result in a brittle architec-ture and poor documentation, which makes ongoing evolution of the system difficult –something t UNCORRECTED PROOF hat is important for web systems. Finally, and perhaps most fundamentally, VTEX(P) PIPS No:5091760 artty:ra (Kluwer BO S5091760.tex; 14/06/2002; 8:46; p. 5 HENDERSON-SELLERS, LOWE AND HAIRE XP utilises partial solutions to resolve uncertainty in requirements but does not inher-ently handle subsequent changes in these requirements (i.e., requirements volatility) asthe system evolves. This creates problems for web systems, where the emerging designresults in an evolving client understanding of their needs – and hence volatile require-ments [Lowe 2000].
A starting point for a web development methodology: OPEN
3.1. OPEN's current architecture The unique aspect of OPEN is that it is not a process but a configurable family ofprocesses, defined in terms of a metamodel (also known as a process framework: theOPEN Process Framework or OPF). This metamodel contains a number of major ele-ments (figure 2) which can be multiply instantiated. From these instances of the processfragments (stored in the OPF repository), organizationally-specific processes can bereadily constructed.
Although there are many metaclasses in the OPF, they mostly cluster into five groups: Work Units (with major subtypes of Activity, Task and Technique), Work Prod-ucts and Producers with support from Stages and Languages (figure 2). Instances ofthese form a component library for OPEN (figure 3) from which individual instances areselected and put together, constructor set fashion, to create a specific instance of OPEN.
This is called process construction. Since the development organization has selectedthese components, they are readily seen to conform fully to that organization's require-ments. In addition, the way these elements are put together is also the decision of the UNCORRECTED PROOF components of the OPEN process framework (after [Firesmith and Henderson-Sellers 2002]).
VTEX(P) PIPS No:5091760 artty:ra (Kluwer BO S5091760.tex; 14/06/2002; 8:46; p. 6 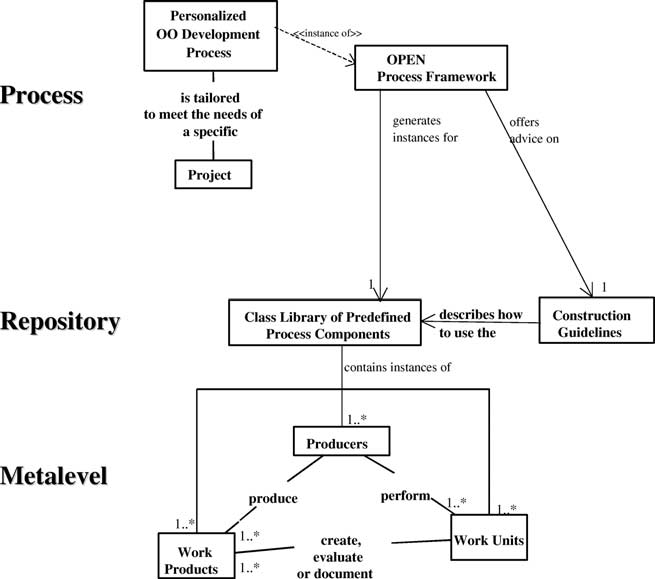 Main Rupatadine References Contents: Main Rupatadine References Pharmacodynamics / Pharmacokinetics Dual effect of a new compound, rupatadine, on edema induced by platelet-activating factor and histamine in dogs: Comparison with antihistamines and PAF antagonists. Queralt M, Merlos M, Giral M, Puigdemont A. Drug Dev Res 1996; 39 (1): 12-8. The antihistamine-H1 and antiplatelet activating factor (PAF) activities of seven compounds, including rupatadine, a new antiallergic drug, were studied in healthy beagle dogs using a new experimental model that allows simultaneous testing of PAF and histamine reactions in the same animal. The method was based on the measurement of wheal area induced in dogs' skin by intradermal injection of PAF (1.5 mug) or histamine (2.5 mug). Rupatadine and the H1-antihistamine drugs cetirizine, levocabastine, and loratadine, administered orally at doses of 1 or 10 mg/kg showed similar maximum potencies (75-85% of wheal inhibition) 4-8 h after treatment. Levocabastine was the longest-acting compound (55% and 69% inhibition 24 h after administration of 1 or 10 mg/kg, respectively). Rupatadine, loratadine, and cetirizine behaved similarly, showing 34% and 58% inhibition at 24 h at the same doses. Dual PAF and histamine antagonist SCH-37370 exhibited mild anti-H1 activity, the maximum effect being 27% at 10 mg/kg. Pure PAF antagonists WEB-2086 and SR-27417 showed no effect against histamine-induced wheals. Only rupatadine, SR-27417A, SCH-37370, and WEB-2086 showed PAF antagonist activity, whereas pure antihistamines were inactive. The most potent PAF antagonist was SR-27417A, with a maximum effect of 56% and 80% at 1 and 10 mg/kg, respectively. Rupatadine and WEB-2086 antagonized PAF-induced wheal response, although they showed less maximum effect and shorter duration of action than SR-27417A. SCH-37370 exhibited only slight PAF antagonist activity at 10mg/kg. Overall, the histamine- and PAF-induced wheal model in dogs proved useful for independent evaluation of histamine and PAF antagonist properties of the tested compounds, as pure antagonists blocked the effect of only one of the mediators. Rupatadine was the only one of the seven compounds studied that showed potent dual activity against PAF and histamine. Protective effect of rupatadine fumarate in experimental conjunctivitis in guinea pigs. Ferrando R, Giral M, Balsa MD, Merlos M, Garcia Rafanell J, Forn J. Methods Find Exp Clin Pharmacol 1996; 18 (Suppl B): 140. XX Congress of the Spanish Society of Pharmacology and the IV Spanish-French Meeting on Pharmacology. Granada (Spain), September 18-20 1996. The topical antiallergic activity of the novel histamine (H) and PAF antagonist rupatadine fumarate (RF; UR-12592 fumarate) eyedrops was evaluated in comparison with loratidine (LOR) in a model of H-, PAF-or ovalbumin (OVA)-induced conjunctivitis in guinea pigs. From the results it was concluded that RF could be useful in the topical treatment of allergic conjunctivitis. (conference abstract). Conjunctivitis was induced by topical application of H (400 ug) or PAF (10 ug) in naive animals or OVA (140 ug) in actively sensitized guinea pigs. Drugs were administered as eye-drops (20 ul) 15 min before agonist or antigen provocation. Inflammation was scored (0-10 point scale) at 5, 15, 30, 60, 90, 120, and 150 min after induction. RF (0.001-0.01 % w/v) strongly and dose-dependently inhibited H-induced conjunctivitis, being about 20-fold more potent than LOR (IC50 values at 30 min were 0.0015 and 0.034% for RF and LOR, respectively). RF (0.05-0.2%) also inhibited PAF-and OVA-induced conjunctivitis, e g. mean scores (at 30 min), PAF: 6.8 and 4.2 for control and 0.1% RF, respectively; OVA: 7.2 and 3.8. LOR, at the same concentrations, inhibited OVA-, but not PAF-induced conjunctivitis.

Effectiveness of different interdental brushes on cleaning the interproximal surfaces of teeth and implants: a randomized controlled, doubleblind crossover study