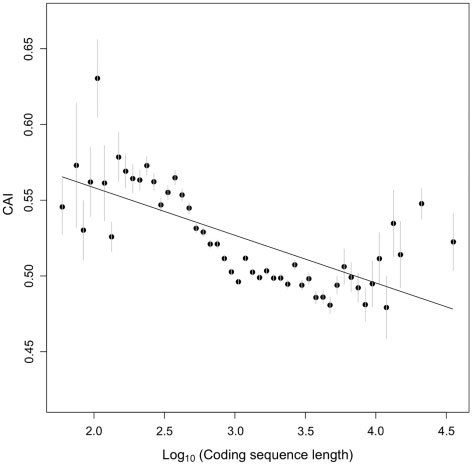 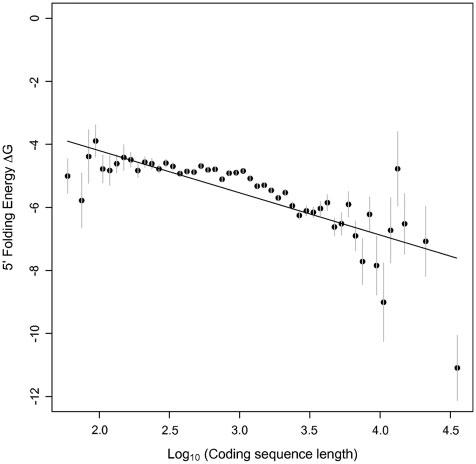 FIG. 1.—Short C. elegans genes have higher 50-mRNA folding ener- FIG. 2.—Short C. elegans genes have higher 50-CAIs than long gies than long C. elegans genes, suggesting faster initiation in short genes.
C. elegans genes, suggesting faster elongation in short genes. Genes Genes have been binned according to their log (ORF length), with dots have been binned according to their log (ORF length), with dots showing showing the mean computed 50-mRNA folding energy in each bin and the mean computed 50-CAI in each bin and lines showing ±1 standard lines showing ±1 standard deviation. The solid line shows best-fit regres- deviation. The solid line shows best-fit regression (Spearman rho ¼ 0.16, sion (Spearman rho ¼ 0.12, P < 7  1090).
P < 5  10179).
summarizes the proportion of species tested that opposed to long genes; and we argued that the resulting exhibit a negative rank correlation between 50-mRNA folding increase in initiation rates is responsible for the greater density energy and ORF length or between 50-CAI and ORF length. In of ribosomes typically found in short eukaryotic genes.
addition, we report the proportion of species that feature a Nonetheless, we have also found a trend toward increased significant negative correlation, at the 5% significance level.
CAI in the same region, in short genes—and so the possibility As summarized in , the results found in C. elegans hold remains that some subtle patterns of 50-CAI might be respon- very broadly across eukaryotes: approximately 80% of tested sible for the trend observed in mRNA structure. To resolve this eukaryotes exhibit negative correlations between mRNA fold- issue, we have performed a randomization procedure that ing and length and between 50-CAI and length. The prepon- isolates the effects of synonymous codons on 50-mRNA struc- derance of significant negative correlations with ORF length ture, controlling for 50-CAI.
among eukaryotes is itself highly significant, for both 50-mRNA For each species, we randomly shuffled the first 50 folding energy (binomial P < 1011) and 50-CAI (binomial codons of each coding sequence, and we repeated this pro- P < 109)—suggesting a systematic eukaryotic trend toward cess 100 times for each gene. In each such permutation, the faster translation initiation and faster early elongation in short 50-CAI of the gene is preserved, whereas the mRNA structure versus long genes. Thus, our results suggest that the higher is possibly perturbed. We then computed the quantile of the ribosome density observed in shorter eukaryotes genes is likely 50-mRNA folding energy for the true gene sequence with due to faster initiation rates in shorter genes.
respect to this null distribution of permuted sequences.
The distribution of correlations for energy and CAI are pre- Because our hypothesis is that shorter genes are under se- sented in and , and the complete results for each lection for weaker 50-mRNA folding (i.e., higher energy) re- species used in the energy and CAI calculations are presented gardless of 50-CAI, we expect a higher quantile for shorter genes. We tested this expectation by computing the Spearman rank correlation between the length of eachORF in the genome and the quantile of its true mRNA foldingenergy compared with the null distribution.
Weak 50-mRNA Folding in Short Genes, Controlling for As listed in , we observed a negative rank correlation between the energy quantile and the ORF length in the great In the previous sections, we have established a systematic majority species (binomial P value < 6  1015)—indicating trend toward weaker 50-mRNA structure in short genes, as that the trend toward weak mRNA structure in short genes Genome Biol. Evol. 4(10):1046–1053.
Advance Access publication October 3, 2012 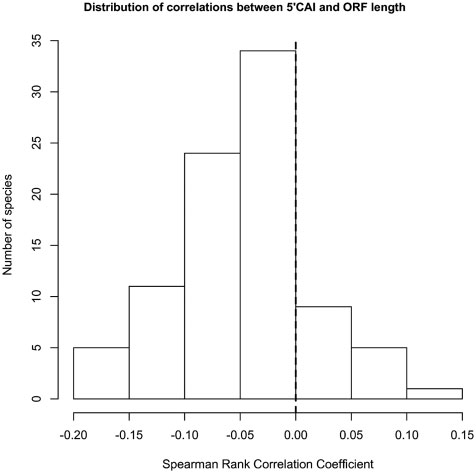 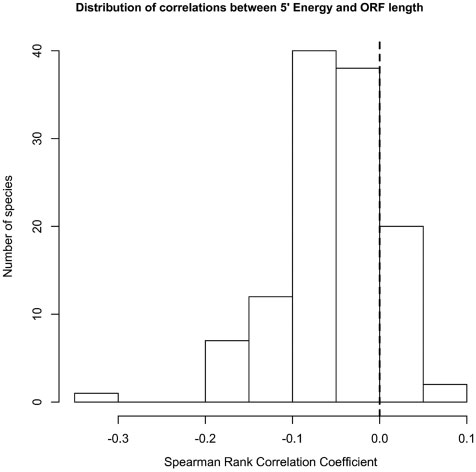 Concussion Guide The Human Motion Institute at Randolph Hospital Concussion Guide for Parents GFELLER-WALLER CONCUSSION AWARENESS ACT The Gfeller-Waller Concussion Awareness Act was created to help educate, and prepare for concussions in high school and middle school athletics. The law is named for two North Carolina football players who died as a result of concussion related injury and whose deaths could have been prevented with proper preparation.