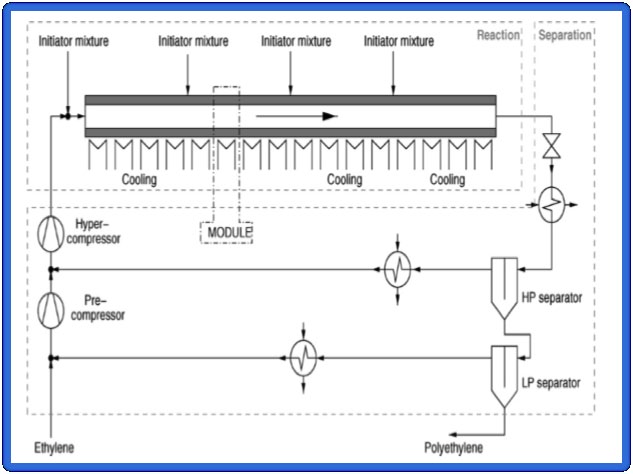 Design of a production plant of LDPE in Colombia Figure 1. Flow-sheet of the LDPE production plant (Textos Cientificos, 2005).
3. Process Description
The reaction zone is conducted by a mechanism of Ethylene Pre-treatment
reaction of 10 reactions (Kienle et al., 2005).
The reaction rate constants (k) are represented by The ethylene required as input into this process modified Arrhenius equations (Kienle et al., 2005); is transported in tankers to withstand high pressure including the effects of temperature (T), change of liquid inflammable from the supplier company, pressure and Activation Energy: Ecopetrol. This is acquired and deposited in a storage tank at atmospheric conditions before entering to the process (Ecopetrol, 2014).
After it enters the process, it is initiated in the conditions of pretreatment to have the raw material prepared before being in the reaction zone.
Here K is the frequency factor specified for each The ethylene stream is required to be pressurized reaction, the term is the activating thus it enters a compressor prior the reaction zone.
Energy, IR the Gas constant and T is the temperature. After the content of ethylene stream is pressurized, The kinetics for the reactions is of first order, the it is split into two streams: The first one is going to kinetics parameters were found in (Brandup, 1989).
react to the first two reaction zones with injection of the The reactor is the central body in the production initiators, and this must react at a higher temperature.
process, this works continuously, therefore the The second stream enters another heat exchanger injection of the initiators should always be listed in each that should be operated at a lower temperature and also section of the reactor, and the tubular reactor shall keep enters the mixer with the injection of new initiators in its conditions of temperature, pressure and condition addition to the current coming from the reaction zone of phase to the reactive mixture, so that the kinetic rate 2. The mixture has to be carried out before entering the laws and reaction mechanisms are not affected (Dong reaction zone 3 and 4.
and Piet, 2004).
Different points in the reactor have steam inlets Reaction
in order to maintain an appropriate temperature and pressure conditions; this steam is supplied by a boiler The reaction process is carried out in PFR tubular producing it at medium pressure.
reactors, where a reaction mechanism of PCR is performed; this is subdivided into 10 reactions or Cristian Felipe Jimenez-Varon, Reinel Tabares Soto / Vector 10 (2015) 59-64 steps in the various stages of the mechanism, such of ethylene that does not react and is evaporated in as initiation, which generates free radicals that will the Flash separator. The reagent that does not react link with different chains of ethylene, forming a vinyl is carried out to some storage tanks, which have to polymer. Then at the stage of propagation different enter a purification process before returning to the transfers of radical and monomer occur in order to starting point.
gradually increase the number of chains formed. The storage tank must have hermetic conditions to Finally, the polymerization process is completed by maintain the pressure and temperature for the ethylene temperature conditions that disrupt the chemical stream.
bond formed, producing low density polyethylene in the temperature range established for the reaction 4. Results
(Idarraga, 2010).
LDPE is polymerized forming large chains and Simulation Process
generating enough entropy in the order of their bonds between monomers, causing a reduction of their The project was carried out using a process of density given that the internal structure has different simulation tools. The objective of this procedure was types of defects (Donald et al., 2004).
to generate the mass and energy balances from which raw materials were required. The utilities and energy Specifying the fluid service
needs are calculated.
The main simulation tool used was the commercial In order to preserve the conditions of the reaction, package Aspen Plus V8.0.
specify and justify the operating conditions, reactors The method of calculation of the properties for should have a thermal fluid service, which for our the polymerization process is known as the Sanchez- case is water.
Lacombe equation, also known as the basis Polysil method in the Aspen Plus software.
Sanchez-Lacombe equations are few models used to calculate thermodynamic properties of liquid solutions In the design of the production plant of LDPE, there for polymers (Dimitrios et al., 2011).
are two separators: Flash isothermal type, located at the exit of the reaction zone 4, which is used to reduce the Sanchez-Lacombe Equation State
pressure to an intermediate value at the atmospheric pressure, in order to carried out Flash separation is The equation of state of Sanchez and Lacombe (1976), is based on the theory of crosslinked flow, assuming that the polymer has a liquid structure · A total mass balance.
flexible. This limits the use of this equation a non- · A mass per component balance.
crystalline polymer. This equation is also used to · A total energy balance.
model the solubility of supercritical CO2 in solid and amorphous and molten polymers. It also describes The first Flash separator works at high pressures; the subsequent swelling of the polymer when the FSC the second Flash separator works at lower pressures in the polymer dissolves. Three considerations are (Lipatov and Nesterov, 1998).
necessary when Sanchez-Lacombe equation is used: In the Flash 1, the liquid phase contains the 1. The solubility of gas in the polymer represents a monomer and polymer, whereas the gas phase is a balance data, 2. the solubility of the polymer in the recycle stream since it is not a product. Ethylene by stage of high pressure gas is essentially zero and itself does not react.
3. Amorphous polymer about its glass transition The Flash 2 is assumed as an ideal separator for temperature can be modeled as a liquid (Rozzi and polymer-monomer mixture, the monomer is recycled Singh, 2006).
to the process and the polymer is removed from the Table 1. Simulation results.
Treatment of ethylene recirculation
Due to the low conversion in the polymerization Ethylene For Recirculation reaction that produces polyethylene, the large amount Polyethylene (LDPE)

Managing Ringworm in the Sport of Judo Report from Sports Medicine and Science Committee Introduction Due to the close contact inherent in the sport of judo, athletes are more susceptible to skin disorder transmissions. Many types of skin disorders exist and we will not be able to cover them all in this report. The focus will be on one particular skin condition affecting many judo athletes over the past 3 years… "Ringworm".