Information about:
Disorder
Revised September 2009
Vermont Family Network
600 Blair Park Road, Ste 240 Williston, VT 05495 1-800-800-4005 Information About Bipolar Disorder is part of a series of information packets developed by the Vermont Family Network (VFN). Designed to provide basic information, the packet includes fact sheets, articles, advocacy tips, and resources for families of children with special needs and for the professionals working with them. After reading the packet, we hope that you'll have a greater understanding of bipolar disorder and the ways in which parents and professionals can support children at home, in school, and in the community. We've selected information from a variety of sources, and many articles are on the Internet. Thank you to BEST (Building Effective Strategies for Teaching), Vermont Department of Education, for making this publication possible. Thanks also go to the organizations and authors who gave us permission to use their articles and fact sheets. Use of any specific articles in this packet is meant for information purposes only and doesn't indicate any endorsement on the part of VFN of the views and opinions of the authors. Because your comments are important to us, we've included a reader's response form at the end of the packet. Please take a few minutes to fill it out and return it to our office. Thank you. Contents
National Alliance for the Mentally Ill Bipolar Disorder (Manic –Depressive Illness) in Teens American Academy of Child and Adolescent Psychiatry Educating the Child with Bipolar Disorder brochure Child and Adolescent Bipolar Foundation Parenting a Bipolar Child – A Mother's Thoughts Bipolar Network News Jerry's Story: Early-onset bipolar – a mother's perspective 21 National Alliance of the Mentally Ill Advocating for Your Child: 25 Tips for Parents David Fassler, M.D. Reader's Response Form NAMI-National Alliance for the Mentally Ill, Bipolar Disorder 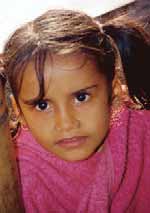 Recent brain imaging studies show In addition, bipolar disorder can cause biological differences in patients with a child to be at times impulsive, bipolar disorder. The disorder affects talkative, distractible, withdrawn, learning in a number of ways, ranging unmotivated, or difficult to engage. from difficulties with sleep, energy, Medications to manage the illness can school attendance, concentration, cause cognitive dulling, sleepiness, executive function, and cognition. Side slurring of speech, memory recall effects from medications can affect the difficulties, and physical discomfort child's learning and energy. Moreover, such as nausea and excessive thirst. while many of these children are uncommonly bright or creative, they Despite all these challenges, a student often have co-occurring learning with bipolar disorder can succeed in the classroom with the right supports and accommodations. Even when moods are stable, the condition often causes cognitive deficits, including the ability to: Remember and recall information Think critically, categorize, and organize information Employ problem-solving skills Quickly coordinate eye-hand movements 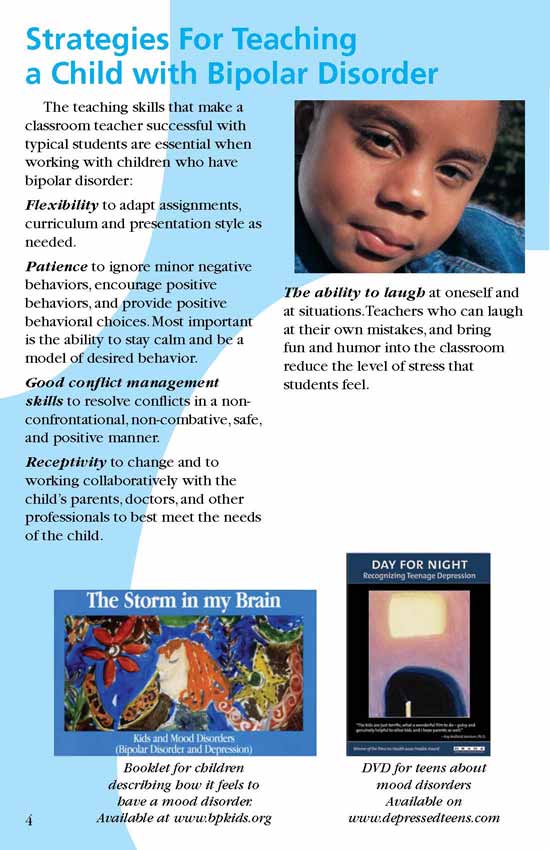 DVD for teens about mood disorders Available on 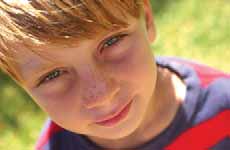 Teaming Up to Help the Child
Parents should identify patterns in Since bipolar disorder affects all behavior that could signal a change in aspects of a child's life, it takes a well- the illness, and help teachers coordinated team of concerned adults brainstorm better ways of handling to give the child the best chance for a specific situations. Teachers and full and productive life.The team school personnel also need to know might include parents, teachers, about changes in the child's home life special education specialists, a or medication in order to work around guidance counselor, an adjustment them constructively at school. counselor or social worker, a school psychologist, an occupational At times of transition, the current or therapist, a speech therapist, and the previous year's teacher needs to work closely with the new teacher or team to The school team should feel smooth the way—change is difficult comfortable consulting with the for any child, but even more difficult child's psychiatrist and/or outside for the child with a neurological It is critical to work closely with the child's family to understand the symptoms and course of the illness. Suggested Accommodations
Students with bipolar disorder benefit enormously from stress-reducing accommodations such as: • Scheduling the student's most challenging tasks ata time of Consistent scheduling that day when the child is best able includes planned and unplanned to perform (allowing for medication-related tiredness, Seating with few distractions, providing buffer space and model children Shortened assignments and homework focusing on quality, not quantity Prior notice of transitions or changes in routine— minimizing surprises A plan for unstructured time or lulls in the day 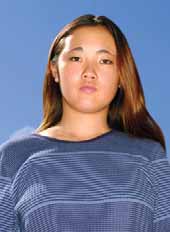 Successful Teaching Strategies
Students with bipolar disorder face Contact should be frequent, timely, and tough challenges navigating through focused on facts and solving problems the many pressures of a typical school (rather than blame).The school needs to day. Their neurologically-based mood inform parents regularly about how the disorder affects emotion, behavior, student is performing.This can be done cognitive skills, and social via a notebook that goes back and forth to school with the child, or a daily chart or e-mail that records successes, These students are very vulnerable to progress, difficulties, and mood stress that can easily overwhelm their information. Parents can then reinforce coping skills. Therefore, it is paramount and support the teacher and the child. to their success in the classroom to Parents can also spot trends in the reduce exposure to stressors and help child's illness and respond before them build coping skills that they will problems reach a crisis.They should need throughout their lives. More than inform teachers of any unusual anything else, these children need stressors at home and changes in structure and predictability to frame the day, provided by supportive and flexible teachers who calmly help them One of the challenges of working with stay in control when any difficulties these children is that even tried-and- true strategies may not work The most important factor in these consistently due to the frequent mood children's success is the way adults shifts the students experience. Being respond to and work with them. The prepared with a variety of approaches teachers who work best with these certainly increases a teacher's odds of students are resourceful, caring, and dealing successfully with their calm, and know how to work positively students' challenges. with children's shifting moods and cognitive weaknesses. Praise, encouragement, and key words elicit positive behaviors, while negativity helps the child spin out of control. Experts recommend some praise for all children at least once every 5 minutes, or 12 positive comments for every negative statement. Good communication between home and school is essential. 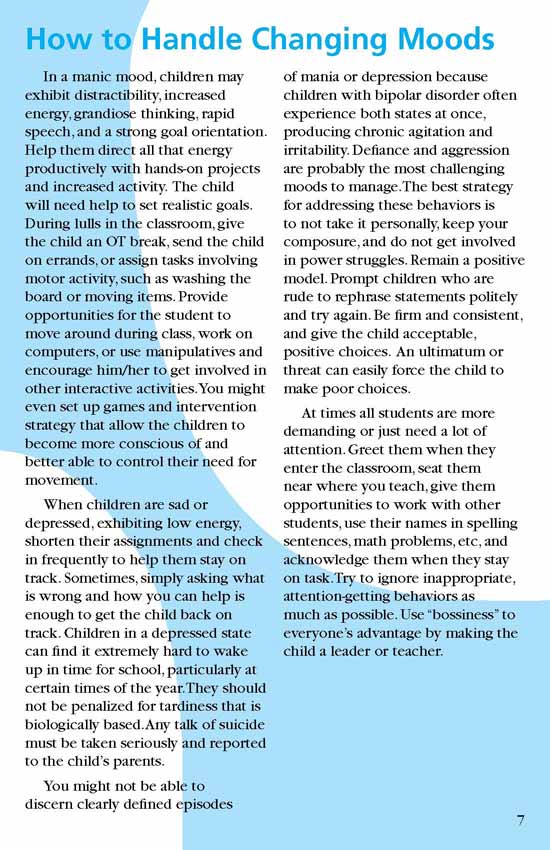 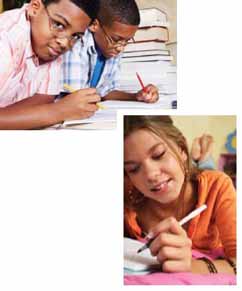 Like children with other neurologically-based disorders, children with bipolar disorder often have difficulty in novel situations and don't know how to behave appropriately. When given some sort of structure or script, however, they are far more successful. Social stories, which have been used by children with autism spectrum disorders, prepare the child in advance for a given situation so he can respond appropriately when that situation occurs. Social stories can be simple, such as talking through and role-playing how to perceive that someone else doesn't want to be splashed. They can also be Carol Gray, noted expert on social longer, such as a 20-page book on stories, provides the following going to a new camp or school. It's guidelines* for writing your own important to not only give the child information on the situation, but also to Picture the goal reassure the child that he is capable of Gather information handling it.The story can also be a jumping off point for discussing "what Teach with the title • * if"scenarios, so the child has a chance Additional Resources to practice appropriate reactions for different outcomes. Involving the child socialstories.cfm in creating the story, either by coming up with what the child might say or by www.polyxo.com/ illustrating it, is a great way to capture the child's interest. html#needforintervention 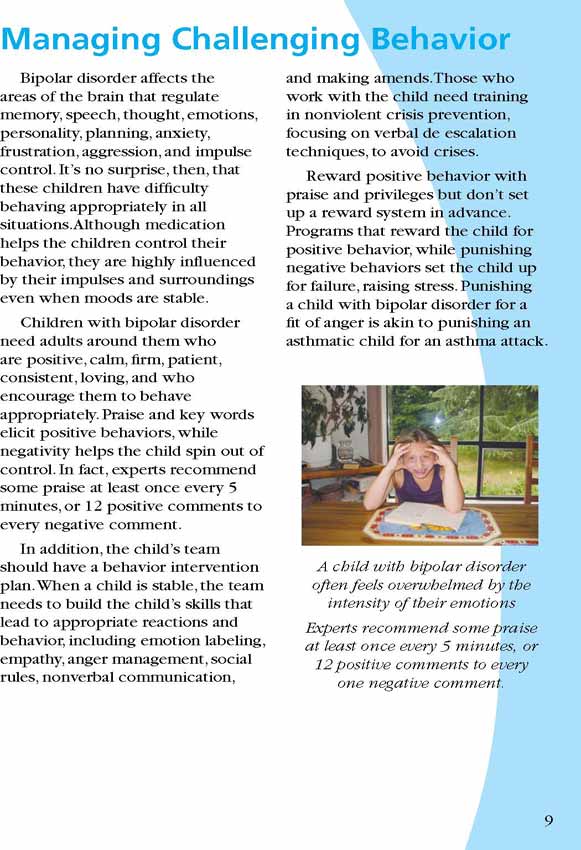 National Depressive and Manic-Depressive Association (NDMDA). A national support
and information-giving group for people with Depression and Manic-Depressive Illness
and for their family members and friends. There are local meetings throughout the
New York metropolitan area and across the country. For information, call NDMDA at 1-
800-82-NDMDA or you can reach them online at http://www.ndmda.org.
National Alliance for the Mentally Ill (NAMI). An international support and
information-giving organization for people with psychiatric illness and their family
members. For information about NAMI membership and availability of local meetings,
call 1-800-950-NAMI, or reach them online at http://www.nami.org.
New Concepts in Treating Bipolar Disorder
by Husseini Manji, M.D. Originally webcast February 11, 2003. Archived on UCLA's
Neuropsychiatric Institute Bipolar Grand Rounds Web site. http://www.bipolargrandrounds.com/archived.html Science Friday: Bipolar Disorder in Children
In this hour of Science Friday, guest host Paul Raeburn and guests talk about bipolar disorder in children, why it's difficult to diagnose, and what is available to help treat the condition. Guests on this show include Ellen Liebenluft, M.D. and Mani Pavuluri, M.D. (October 11, 2002) http://www.sciencefriday.com/pages/2002/Oct/hour1_101102.htm1 Child and Adolescents Bipolar Foundation
Expert presentations taped at the American Society of Adolescent Psychiatry annual meeting in Chicago, April 21-24, 2002. http://www.bpkids.org/learning/reference/ Mood Stabilizers in Children and Adolescents
by M. Kovacs, M. Pollock, Journal of the American Academy of Child & Adolescent Psychiatry June 1995;34(6):715-23. N.B.: Many resources are available online at www.bpkids.org. Some may require
membership to access.
Bipolar Disorder in Children: Misdiagnosis, Underdiagnosis, and Future Directions
(a White Paper comissioned by the National Institute of Mental Health) by Martha Hellander, Executive Director, Child & Adolescent Bipolar Foundation (May 2000) An excerpt from Surviving Manic Depression: A Manual on Bipolar Disorder for
Patients, Families and Providers by E. Fuller Torrey, M.D. and Michael B. Knable,
D.O. (Basic Books, 2002). http://www.bpkids.org/learning/reference/articles/01-24-
03.htm
Vermont Family Network
600 Blair Park Road, Suite 240 Williston, VT 05495-7549 Vermont Family Network (VFN) strives to make each of its publications clear, correct, and complete. Please help us by answering a few questions.
1. Which publication are you evaluating? _ Bipolar Disorder
2. Please rate this publication: a. for completeness of information
b. for clarity (ease of use)
c. for accuracy of information
d. overall

8. Finally, please check all of the following that apply to you:
parent or guardian surrogate or foster parent relative, friend or advocate individual with a disability service provider (agency) _ other (please specify) Thank you for taking the time to let us know how we might improve our materials.

Rainbow Frequently Asked Questions 1. What is Methemoglobin? Methemoglobin (MetHb) is an oxidized form of hemoglobin that is unable to carry oxygen. MetHb normal y exists in smal concentrations in blood, 1- 2% of the total available hemoglobin. Methemoglobinemia is defined as elevated levels of methemoglobin in the blood, can be difficult to diagnose and is lethal at high levels. With a methemoglobin of 3-15%, the skin can turn to pale gray or blue (cyanosis). With levels of 25%, additional symptoms can include headache, weakness, confusion and chest pain. Levels above 70% may result in death if not treated immediately.