V – Vanadium
Vanadium is one of the lightest members of the abundance of detrital Fe oxides, clay minerals, first row transition elements, consisting of Sc, Ti, hydrous oxides of Fe and Mn, and organic matter. V, Cr, Mn, Fe, Co, Ni, Cu and Zn, and belongs to The redox regime is important, V remaining group 5 of the periodic table, along with Nb and mobile under oxidising conditions but being Ta. The element has an atomic number of 23, an subject to precipitation just above the atomic mass of 51, three main oxidation states sulphate/sulphide redox threshold within a pH (+3, +4 and +5) and two naturally occurring range of 5.0–8.0 (Brookins 1988). The average V
isotopes (50V, and 51V), of which 51V is the most content of quartzitic sandstone and pure carbonate abundant at 99.8% of the total mass. sediments is low (<15 mg kg-1), with higher Vanadium is a lithophile metallic element at values in greywacke (40–150 mg kg-1), shale (90–
low pressure, but may be siderophile at the 260 mg kg-1), and clay (ca. 200 mg kg-1). Coal elevated pressures suggested for core formation in may also contain appreciable amounts of V. The the Earth. It is incompatible in most silicate most V-rich sedimentary rock is black shale, minerals, although it may be moderately reflecting both the affinity of the element for compatible in some pyroxenes (Snyder 1999). It organic sorption sites and its relative immobility forms several minerals including magnetite under reducing conditions. Cited average values (Fe,V)304, vanadinite Pb5(VO4)3Cl, and carnotite for loess and river particulates are 73 and 170 K2(UO2)2(VO4)2.3H2O. It is also present as a trace mg kg-1 V respectively (McLennan and Murray element in mica, apatite, pyroxene and amphibole. Montroseite VO(OH) occurs across a wide pH Vanadium is a highly mobile element. It range under reducing conditions, exhibiting V in displays both cationic character under acid its lowest valency (V3+), and acts as a source for a conditions, as vanadyl VO2+ and VO 2+ wide range of V3+, V4+ and V5+ oxides and anionic character under less acid to alkaline hydroxides. Sulphides of V4+ are found in ore conditions, as vanadate HVO 2- (Brookins 1988). The solubility of V is strongly The trivalent ion V3+ has an ionic radius (64 controlled by its oxidation state. Its solubility is pm) almost identical to that of Fe3+ (65 pm). highest in oxic environments, where vanadyl Because of this, V is frequently found as a cations predominate. Complexes with fluoride, substitute for Fe in magnetite and in the sulphate and oxalate may also act to increase V ferromagnesian silicate minerals formed during solubility under oxidising conditions (Wanty and primary magmatic processes (Curtis 1964). Mafic Goldhaber 1992), although the presence of U and rocks are typically enriched in V relative to most phosphates can result in the formation of highly intermediate and felsic rocks. Primitive magma insoluble V5+ complexes. Under more reducing types including calc-alkaline, alkaline and conditions, the relatively immobile V3+ state tholeiitic rocks have broadly similar V concentrations (Taylor et al. 1969). Mielke Kabata-Pendias (2001) reports that the (1979) cites values: ultramafic 40 mg kg-1, behaviour of V in soil has received little attention. basaltic 250 mg kg-1, granitic 44–88 mg kg-1, and
It appears that Fe oxides hold a reasonable with an average crustal abundance of 136 mg kg-1. fraction of soil V, however, the role of clay In ultramafic rocks, the V content generally minerals as well organic acids may be more reflects the abundance of minerals, such as Fe-Ti- significant than the V fraction adsorbed by Fe Cr oxides and pyroxene. Elevated V values are, oxides. The highest concentrations of V in soil therefore, indicative of mafic rocks. Although are reported for soil developed on mafic rocks described as a trace element, V is relatively (150 to 460 mg kg-1 V), while the lowest were abundant even though it only rarely forms found in peat soil (5 to 22 mg kg-1 V). The independent minerals in igneous rocks. average V content of soil worldwide has been Vanadium is largely immobile during estimated to vary from 18 mg kg-1 for histosols to metamorphism (Condie 1976). The V content of 115 mg kg-1 for rendzinas (Kabata-Pendias sedimentary rocks reflects primarily the Well-drained, lowland areas are likely to host environmental contamination. the highest V concentrations in stream water and, Vanadium is biologically active and is an in almost all instances, the dispersal of V will be essential nutrient for many animals. Its precise controlled by the prevailing rates of sorption to biochemical function is still in some doubt (WHO hydrous Fe and Mn oxides, clay and organic 1996), but Frausto da Silva and Williams (1991, matter (Krauskopf 1956). As a result, although V 1994, 2001) suggest a role in peroxidase enzymes. concentrations as high as 70 µg l-1 have been An intake of over 10 mg V per day can be toxic found in some natural water, most surface and for adults, but this greatly depends on its groundwater rarely exceed 10 µg l-1 (Hem 1992). speciation and oxidation state; the source is Anthropogenic sources of vanadium include usually airborne anthropogenic V (WHO 1996). oil and coal combustion, steel alloy tool In severe cases, toxic levels of V causes the production and traffic pollution. Vanadium has a inhibition of certain enzymes with animals, which variety of industrial uses in metallurgy, has several neurological effects, and can cause electronics and dyeing. Although the amounts of breathing disorders, paralyses and negative effects V used are small and are insignificant in terms of on the liver and kidneys. any direct anthropogenic input, the combustion of Table 72 compares the median concentrations coal and the waste from such processes, e.g., fly- of V in the FOREGS samples and in some ash, make a significant contribution to reference datasets. Table 72. Median concentrations of V in the FOREGS samples and in some reference data sets. Origin – Source
Number of
Size fraction
(V)
mm
Upper continental Total (ICP-MS)
Aqua regia (ICP-MS)
Total (ICP-MS)
Aqua regia (ICP-MS)
Soil, C-horizon3) Aqua regia (ICP-AES) 24.2 Filtered <0.45 µm
0.46 (µg l-1)
Stream sediment
<0.15
Total (XRF)
Stream sediment
<0.15
Aqua regia (ICP-AES)
Floodplain sediment
Total (XRF)
Floodplain sediment
Aqua regia (ICP-AES)
Stream sediment5) Aqua regia (ICP-AES) 38 1)Rudnick & Gao 2004, 2)Koljonen 1992, 3)Salminen et al. 2004, 4)Ivanov 1996, 5)Garret 2006. 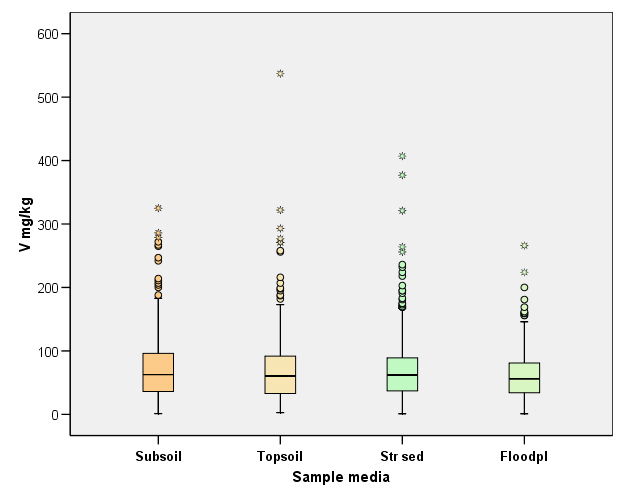 V comparison between sample media
Patterns in V distribution between all solid Patterns between total and leachable (aqua regia) sample media are broadly similar, although stream V concentrations are broadly similar, except in sediment concentrations are higher than in other north-eastern Portugal and over the Pyrenees, sample media throughout most of Britain and where leachable V data are lower than total data in Ireland and in southern Norway (Fe and Mn oxide all sample media (no explanation). precipitation induced by low pH, high rainfall A boxplot comparing V variation in subsoil, conditions). These patterns are similar to those topsoil, stream sediment and floodplain sediment seen for Fe, but weaker. Lower V is present in is presented in Figure 51. stream sediment throughout Croatia, Slovenia and Stream water V data show similar patterns to southern Austria (possibly explained by the those observed in solid sample media throughout removal of fine-grained material from the residual most of southern and eastern Europe, but opposite soils). Vanadium values in subsoil in north- patterns occur throughout Fennoscandia western Spain are higher than in other solid (relatively immobile V3+ associated with reducing sample media. Vanadium is higher in stream conditions), the Quaternary sediments of northern sediment in southern Portugal compared to other mainland Europe and most of the Iberian solid sample media. Lower V values are observed Peninsula (in the south, higher concentrations in floodplain sediment throughout the Pyrenees associated with oxic conditions). compared to the other solid sample media. Figure 51. Boxplot comparison of V variation in subsoil, topsoil, stream sediment and floodplain sediment.