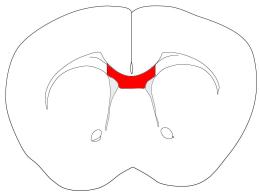 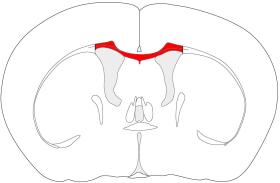 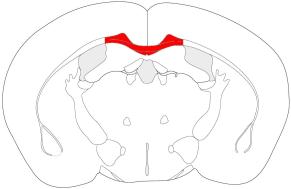 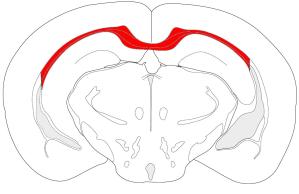 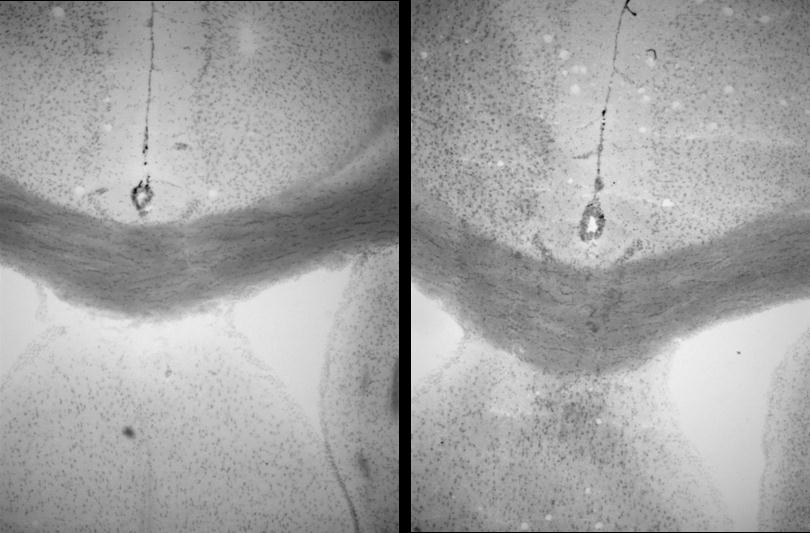 A Constant rota-rod B Accelerated rota-rod Figure 10: First pilot experiment. (A) Rota-rod performance of mice from weeks 1 to 4 with a constant speed of 16 rpm. (B) Rota-rod performance of mice from weeks 5 to 7 with accelerated speed from 4 to 40 rpm. Mean±SEM presented; N= 42-44/group. Placebo (6 weeks) Cuprizone (6 weeks) Figure 11: First pilot experiment. Presentation of a LFB-staining in the corpus callosum of a mouse fed for 6 weeks with normal food pellets (Placebo) and a mouse fed with food pellets containing 0.2% cuprizone. In the second pilot experiment, the application of cuprizone via pellets or ground chow was compared (for the experimental design see Materials and Methods section 2.5.1). The main readout was body weight of mice. This parameter was significantly influenced by the cuprizone feeding of mice via ground chow (3-way ANOVA for repeated measures, F(2,3)=55,80, P=0.004). Already 4 days after the application of 0.2 or 0.3% cuprizone mixed into ground chow these mice lost weight. The body weight further decreased and stayed on a constantly lower level until the end of the experiment (Figure 12A). Two mice fed with 0.3% cuprizone and one mouse of the 0.2% diet-group died on day 19. In comparison no weight loss and even a gain of weight over time was observed in mice fed 0.2% cuprizone via food pellets (Figure 12B; 2-way ANOVA for repeated measures, F(6,24)=131,75, P<0.001). Toxicological analysis of the food pellets confirmed that cuprizone was present, intact and active (see Supplement 6.1; performed in the Department of Pharmacology and Toxicology at the University hospital Göttingen, Germany). Based on these findings all future experiments were performed with 0.2% cuprizone mixed into standard rodent chow. Figure 12: Second pilot experiment. (A) Body weight of mice fed with normal ground chow (Placebo) or cuprizone mixed into ground chow. Cuprizone feeding significantly influenced the body weight of mice (3-way ANOVA F(2,3)=55,80, P=0.004). (B) Body weight of mice fed with normal food pellets (Placebo) or food pellets containing 0.2% cuprizone. No effect of feeding. Mean±SEM presented; N= 3.2 Effect of EPO on re- and demyelination
3.2.1 Overview of analyzed parameters
In the following tables, an overview of the analyzed parameters in the two studies investigating the effect of EPO on remyelination (Table 6) and demyelination (Table 7) is presented. In the study which analyzed the effect of EPO on remyelination (Table 6) mice were not sacrificed at weeks 6 and 15, therefore only behavioral analyses were performed at these time points. The lack of data at some of the other time points in both studies is due to the results obtained from previous time points or the other parameters at that time. Additional analyses were not thought to give further insight into the EPO effect under the given experimental conditions. EPO effect on remyelination 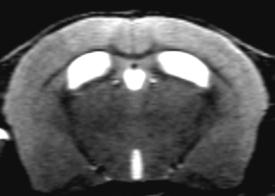 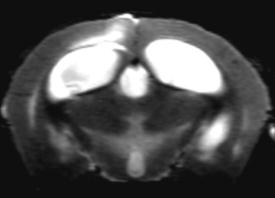 REGULATIONS AND SYLLABUS BACHELOR OF PHARMACY (B.PHARM) COURSE JSS UNIVERSITY SRI SHIVARATHREESHWARA NAGAR MYSORE – 570 015 JSS University Sri Shivarathreeshwara Nagar Mysore – 570 015 Bachelor of Pharmacy (B.Pharm) course REGULATIONS These regulations shall be called as "The Regulations for the B. Pharmacy Degree course of the J.S.S. University, Mysore". They shall come into force from the Academic Year 2012 - 2013. The regulations framed are subject to modifications from time to time by the authorities of the university Minimum qualification for admission to the course