Digestive Diseases and Sciences, Vol. 50, No. 3 (March 2005), pp. 509–513 ( C CASE REPORT
Multifocal Gastric Carcinoid Tumor in a Patient with Pernicious Anemia Receiving Lansoprazole TAN ATTILA, MD,* RAJ SANTHARAM, MD,* DENNIS BLOM, MD,† RICHARD KOMOROWSKI, MD,‡
and TIMOTHY R. KOCH, MD*
KEY WORDS: carcinoid tumor; stomach; proton pump inhibitor; gastrin.
Gastric carcinoid tumors remain rare. Among all sites, In an international consensus report, it was suggested that the stomach is the seventh most common location for the level of hypergastrinemia induced by long-term treat- the formation of carcinoid tumor (1). In a study from the ment with a H,K-ATPase inhibitor would not be sufficient Mayo Clinic in Rochester, Minnesota, published prior to to increase the risk of developing gastric carcinoid tumor the widespread availability of endoscopy, gastric carcinoid tumor comprised 6% of all gastrointestinal carcinoid tu- There has been one case reported of an individual in mors (2). In a study of 8305 carcinoid tumors (1), 3.2% of whom a gastric carcinoid tumor was detected during long- carcinoids were identified in the stomach. Of these cases term anti-ulcer therapy which included lansoprazole (7).
of gastric carcinoid tumor, 79% were Caucasian in origin In that single report, the patient had recurrent gastric and and 64% were females. The average age at diagnosis of duodenal ulcers, but no information was provided about gastric carcinoid tumor ranged from 62 to 69 years. The 5- the patient's gastric acid secretion or serum gastrin level year survival with gastric carcinoid tumor was 64% with or imaging of the pancreas.
localized disease, 40% with regional disease, and 10% Interest in the potential relationship between the chronic with distant disease.
use of H,K-ATPase inhibitors and gastric carcinoid tumors Hypergastrinemia is a known risk factor for the develop- has returned following a recent report showing that, since ment of gastric carcinoid tumor. Prior workers suggested 1950, the percentage of gastric carcinoids among all stom- major relationships between gastric atrophy that induces ach malignancies has increased from 0.3 to 1.8% (8). In achlorhydria, resulting in hypergastrinemia, with subse- addition, since 1969, the percentage of gastric carcinoids quent development of gastric carcinoid tumor (3, 4). In among all gut carcinoid tumors has increased from 2.4 to some patients with Zollinger–Ellison syndrome, hyper- 8.7% (8). Factors that may be important in this increase gastrinemia is also associated with the development of in the incidence of gastric carcinoid tumor are therefore gastric carcinoid tumor (4).
of high interest.
Prior to the introduction of H,K-ATPase inhibitors, studies in rats revealed a risk of development of small CASE REPORT
intramucosal gastric carcinoid tumors originating fromenterochromaffin-like cell origin (5). Hypergastrinemia in A 52-year-old Caucasian female was seen by her physician patients receiving chronic (mean of 13 months) omepra- for postprandial nausea and diarrhea. The patient denied the use zole therapy has been shown to induce hyperplasia of gas- of alcohol or tobacco products. She had had no weight loss, chestpain, palpitations, malaise, vertigo, syncope, or melena. She had tric endocrine cells in 11–19% of the patients, but with been diagnosed with type I diabetes mellitus 12 years prior to no dysplastic or neoplastic lesions of endocrine cells (6).
this visit. The patient had been diagnosed 9 years previously withbipolar illness, she had been diagnosed with hypothyroidism23 years before, and she had a long-standing diagnosis of hyper- Manuscript received July 19, 2004; accepted August 27, 2004.
tension. The patient was started on lansoprazole, 30 mg daily, From the *Division of Gastroenterology & Hepatology, Department
and upper endoscopy was arranged for the patient at a 2-month of Medicine, †Department of Surgery, and ‡Department of Pathology,
follow-up. Her nausea remained at 2 months and had been only Medical College of Wisconsin, Milwaukee, Wisconsin 53226, USA.
Address for reprint requests: Timothy R. Koch, MD, Division minimally improved with a bland diet.
of Gastroenterology & Hepatology, Medical College of Wisconsin, The patient underwent upper endoscopy in December 2003.
9200 West Wisconsin Avenue, Milwaukee, Wisconsin 53226, USA; At endoscopy, the patient had evidence for antral gastritis. Upon retroflexion, the patient was noted to have a 5-mm cardia nodule Digestive Diseases and Sciences, Vol. 50, No. 3 (March 2005)  2005 Springer Science+Business Media, Inc. 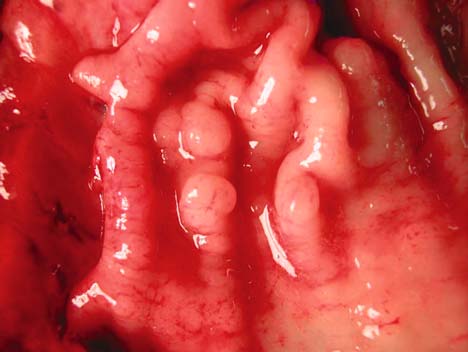 ATTILA ET AL.
of lansoprazole and a 2-week follow-up upper endoscopy wasscheduled.
Fasting serum gastrin was repeated at 2 weeks and it had decreased to 483 pg/ml. At repeat upper endoscopy off of lanso-prazole, gastric fluid was aspirated from the antrum and sent tothe laboratory for pH-metry. The pH of gastric fluid was found tobe 2.0. Due to the location of the patient's gastric cardia nodules,it was thought that endomucosal resection at upper endoscopywould create a high risk for the patient. Each of the gastric fundicand cardia nodules was individually biopsied, and each biopsywas identified as a carcinoid tumor.
The patient underwent an [In-111]-octreotide scan in nu- clear medicine, and only a normal distribution of tracer activ-ity was identified. A helical computerized tomography scan ofthe abdomen using a 2.5-mm scan thickness was performed,with the administration of gas granules to distend the stom-ach; a 2-mm hepatic cyst was identified but there was no bil-iary ductal dilation; the spleen, pancreas, adrenal glands, and Fig 1. At upper endoscopy, in a view of the stomach obtained during
kidneys were normal; there was no nodule or mass identi- retroflexion, multiple nodules are seen adjacent to the gastroesophageal fied within the stomach, and no retroperitoneal or mesenteric adenopathy; and the mesentery was normal and no ascites waspresent.
that was within 1–2 cm of the gastro-esophageal junction, and The patient was referred to gastrointestinal surgery for an three fundic nodules ranging in size from 5 to 10 mm (see opinion regarding therapy for multifocal gastric carcinoid tu- Figure 1). The patient was also noted to have three tiny nod- mor. Therapeutic options including (a) endoscopic surveillance, ules in the distal second portion of the duodenum. The remain- (b) combined endoscopic surveillance and/or resection with open ing examination was unremarkable. Biopsies were separately or laparoscopic antrectomy, and (c) total gastrectomy with re- obtained from the antrum, from the upper gastric nodules, and section of all carcinoid bearing mucosa were discussed and in- from the distal duodenal nodules. Duodenal and antral biop- formed consent was obtained. The patient agreed to undergo sies revealed no pathological diagnosis; there was intact villous a potentially curative total gastrectomy with an approximately architecture of the duodenal mucosa with no increase in intraep- 45-cm Roux-en-y esophagojejunostomy and D2 lymphadenec- ithelial lymphocytes; gastric mucosa revealed normal glandu- tomy. This resection included removal of all lymph node-bearing lar architecture, and a Warthin–Starry stain did not reveal any tissue located peripheral and parallel to the lesser and greater Helicobacter pylori organisms. Biopsies of the fundic and cor- curves and around the celiac axis. Due to the presence of pus nodules revealed groups and nests of cells with monomor- cholelithiasis, cholecystectomy was also performed. The patient phic round nuclei, inconspicuous nucleoli and eosinophilic, and tolerated the procedure well; there were no intraoperative or a slightly granular cytoplasm. Due to these findings of gastric postoperative complications and the patient was discharged on carcinoid tumor, special staining was performed. Immunohisto- postoperative day 8 while tolerating a postgastrectomy diet.
chemical stain for gastrin revealed no immunoreactive material.
At pathology, multiple cardiac and fundic polyps were identi- However, immunohistochemical stains for synaptophysin and fied after opening the stomach. Sections taken from these polyps chromogranin A revealed immunoreactive material within tumor revealed gastric carcinoid tumors. These tumors at immunos- taining were strongly immunoreactive for chromogranin A (see The patient was then seen in follow-up at the gastrointe- Figure 2) and weakly immunoreactive for synaptophysin. Im- stinal clinic. Several years prior to this visit, the patient had munohistochemical staining for gastrin revealed no immunore- described alternating periods of diarrhea and constipation pre- active material. Multiple areas of the stomach revealed prominent viously diagnosed as due to irritable bowel syndrome. There intestinal metaplasia of the complete type, with scattered goblet was no family history of peptic ulcer disease or gastrointesti- cells and increased Paneth cells within the affected glands. There nal cancer. The patient had no prior history of treatment with a was no metastatic tumor present in five compartment 1 (lymph H,K-ATPase inhibitor, and she denied use of any nonsteroidal node stations 1–6) representative lymph nodes. Similarly five anti-inflammatory drug. She denied flushing or parasthesias, and compartment II (lymph node stations 6–11) lymph nodes were she had no history of diabetic retinopathy. At this time, her med- negative for metastatic disease.
ications included celecoxib, lansoprazole, 30 mg daily, levothy- At transmission electron microscopy, multiple sections were roxine sodium, lamotrigine, quetiapine fumarate, insulin, ator- examined and the findings were homogeneous. The find- vastatin calcium, zolpidem tartrate, and ramipril. In addition, ings revealed granule-filled neuroendocrine secretory cells (see she was using a daily combination supplement containing folacin Figure 3). There were very dense granules showing a size and (2.5 mg), cyanocobalamin (1 mg), and pyridoxine · HCl (25 mg).
shape pleomorphism characteristic of carcinoid tumor cells.
Physical examination of the abdomen was unremarkable.
Fasting serum gastrin at that time was elevated, at 1111 (range, 0–100) pg/ml. Serum chromogranin A level was elevated at 54 (range, 6 to 39) ng/ml, and anti-parietal cell antibodies weredetected at a titer of 1:320. Intrinsic factor antibodies were not There has been one previous case report of a gastric detected. It was requested that the patient discontinue the use carcinoid tumor in a patient receiving lansoprazole (7). In Digestive Diseases and Sciences, Vol. 50, No. 3 (March 2005) 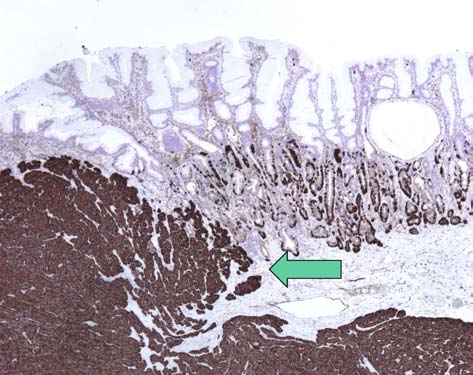 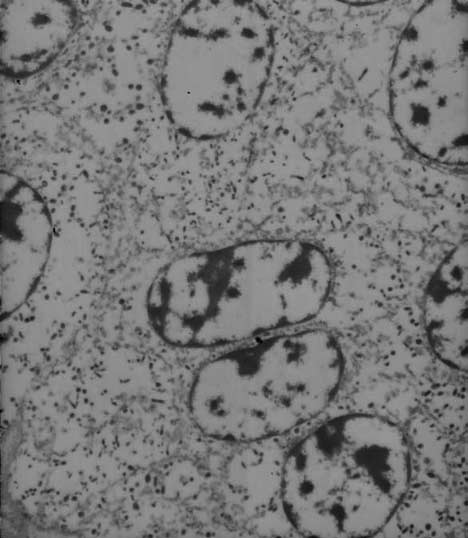