The rock studied is a dolostone from hydrothermal origin (Lower Tertiary), from Valcheta (Province of Río Negro, Argentine). It is a porous rock, without alteration, composed by dolomite with minor amount
of quartz, feldspar and fragments of rhyolitic volcanic rocks. The grain size ranges from 10 to 30 μm. The
insoluble residue varies between 10 and 20 %. By XRD, illite, smectite and sepiolite were also identified in its
composition. Three different samples of this rock (a, b and c) were used throughout these studies.

Table 1 shows the type, origin and the main characteristics of the MA used in this study for preparing mortar and concrete mixtures. The replacement percentages used of each MA were as follows: 30 wt%, for
natural pozzolan; 40 wt%, for fly ash; 60 wt%, for granulated blast-furnace slag; and 10 wt%, for silica fume.
2.2 Methods

Several alkali reactivity test methods were applied on rock, mortar and concrete specimens in order to evaluate the ACR of the rock sample under study. The main guidelines of these test methods are given below. Chemical method

A rock sample is analyzed for CaO/MgO ratio and Al2O3, according to CSA A23.2-26A [32]. The results are plotted on a graph showing zones that correspond to aggregates potentially expansive or not, due to ACR [33].
Rock cylinder method

A modified version of ASTM C 586 [34] was applied for this study. Length changes were measured on rock cylinders (19 mm in diameter and 75 mm in length) while immersed in 1N NaOH solution at 23 °C. The volume of alkali solution to the volume of rock specimen ratio was about 7. Mortar bar test method (MBT)

25 x 25 x 285 mm mortar bars were made with HAC, according to ASTM C 227-87 [35] (i.e. maintaining mortar flow between 100 and 110 and storing the bars in wicked containers). Mortar bar expansions were measured up to 12 months. MBT was both applied to evaluate the expansion behavior of VD and the effectiveness of the addition of 1.0 % LiCl (by weight of cement) to control the deleterious reaction. Some additional tests were conducted using the aggregate with a coarser grading. Mortar bar expansions greater than 0.05 % at 3 months or 0.10 % at 6 months are considered potentially deleterious. Accelerated mortar bar test method (AMBT)

25 x 25 x 285 mm mortar bars were made with HAC, according to ASTM C9-P214 (similar to ASTM C 1260), widely known as NBRI [36]. Mortar bar expansions were measured up to 28 days, maintaining the bars immersed in 1N NaOH solution at 80 °C. AMBT was both run to evaluate the expansion response of VD and the effectiveness of MA for inhibiting the expansive reaction. Concrete prism test method (CPT) 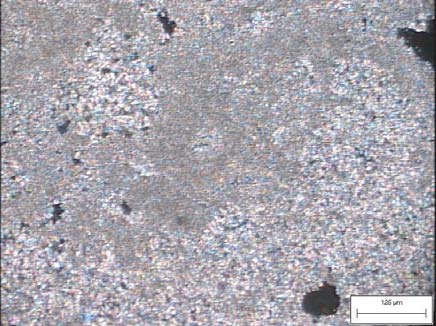 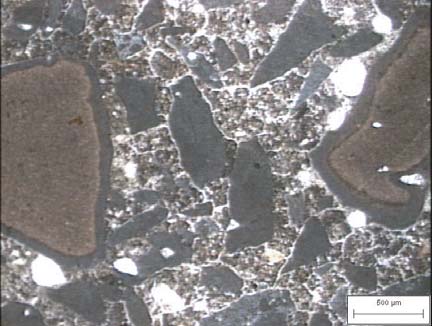