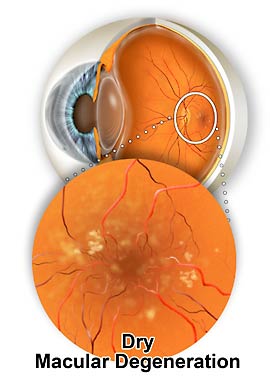 Macular Degeneration
Age related macular degeneration (AMD) is the leading cause of legal blindness in the elderly Caucasian population, but is relatively rare in other races. The degenerative condition of the central retina (macula) only affects central vision, leaving peripheral vision intact. AMD affects approximately 30% or more of the Caucasian population age 75 and greater and, while no one knows the exact cause of this disorder, a genetic link has been made. The primary lesion appears to occur deep to the central retina with deposits known as drusen. Drusen are thought to be metabolic by-products, the increasing deposition of which may further interfere with the high metabolic activity of the macula. Risk factors for vision loss with AMD include advancing age, hyperopia (farsightedness), family history of AMD, exposure to ultraviolet (UV) light, smoking, and high blood pressure. Nutritional factors may also play a role, and will be discussed in further detail below under "Protection Against AMD". There are two basic forms of AMD: "dry" AMD and "wet" AMD. The latter of these is the more visually debilitating form. These are discussed in further detail below. "Dry" AMD
The deposition of drusen typically begins
in the middle-aged and progressively
worsens over a period of many years,
perhaps several decades. This is
associated with increasing macular
destruction and gradual reduction in
central vision. "Dry " AMD accounts for
90% of cases and, fortunately, does not
usually cause total loss of reading vision.
Patients with this form of AMD must be
monitored quite closely, as the condition may deteriorate into "wet" AMD. The yellowish deposits in the macula, known as drusen, are a classic sign of dry macular degeneration 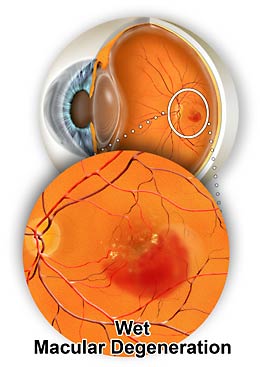