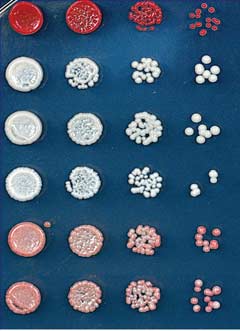 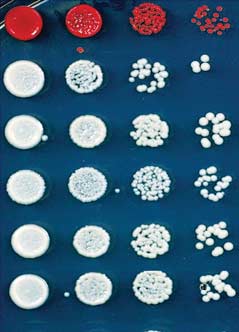 RESEARCH RESEARCH ARTICLE quantitative polymerase chain reaction (qPCR) but not the Dicer ribonuclease (Dcr1) or the resulted in the formation of only white colonies experiments showed that a 40- to 50-kb domain Argonaute protein (Ago1) (Fig. 3, B and C). Thus, on +tet medium (Fig. 3E). Therefore, rather than of H3K9 di- and trimethylation (H3K9me2 and maintenance requires the machinery that acts differences in clr4+ dosage, the appearance of red -me3) encompassing the 10XtetO-ade6+ region downstream of H3K9me but occurs indepen- or sectored colonies depends on the presence of was completely lost 24 hours ( 10 cell divisions) dently of an RNA interference (RNAi)–based Clr4 with an intact chromodomain.
after the addition of tetracycline to the growth mechanism. Consistent with the idea that Epe1 In an attempt to identify other features of medium (Fig. 1D and fig. S1, B to D). We obtained acts as a demethylase, the replacement of epe1+ chromatin that could be important for mainte- similar results with cells that carried a WT copy with alleles containing active-site mutations (epe1- nance, we deleted two genes that are associated of clr4+ in addition to TetR-clr4-I (Fig. 1D and K314A and epe1-H297A) , ) displayed a main- with transcription: mst2+, which encodes a his- fig. S1D, lower two rows). These results demonstrate tenance phenotype similar to its deletion (epe1D) tone acetyltransferase (), and set1+, which en- that a domain of H3K9me and the associated (Fig. 3D). Furthermore, consistent with a require- codes a histone H3K4 methyltransferase (In silent state are reversed within 10 cell divisions ment for the chromodomain of clr4+ in mainte- both cases, we observed establishment that was after release of the sequence-specific initiator nance (Fig. 2A), the replacement of clr4+ with a stronger than that of the wild type (–tet), as well clr4-ID allele (which lacks the chromodomain) as weak maintenance (+tet) effects (fig. S4, A and Inheritance uncoupled fromsequence-specific initiation A minimal mechanistic requirement for inheri-tance of a domain containing H3K9me marks involves the recognition of preexisting H3K9 methylated histones coupled to the modifica-tion of newly deposited histones. The loss of a 45-kb domain of H3K9 dimethylation after release of TetR-Clr4-I (Fig. 1D) may either be dueto nucleosome exchange processes associated FLAG ChIP (24 hours)
with transcription and chromatin remodeling or erasure of the methyl mark by a demethylase.
Alternatively, the rapid decay of methylation inthis domain may be facilitated by competition between the ectopic locus and native heterochro- ade6 TetR-clr4-I, clr4+
matic domains for a limiting pool of proteins that play critical roles in maintenance.
To test these different scenarios, we constructed TetR-clr4-I, 10XtetO-ade6+ cells (with or without clr4+) that carried deletions for genes involvedin various chromatin-maintenance pathways ). The deletion of epe1+, which encodes a domain size 45kb putative histone H3K9 demethylase (), didnot affect the establishment of silencing, as in- dicated by the appearance of red colonies on–tet medium for both TetR-clr4-I, epe1D cells and TetR-clr4-I, clr4+, epe1D cells (Fig. 2A, left side).
In contrast to epe1+ cells, epe1D cells formed red,white, and sectored colonies in the presence of TetR-clr4-I + tet
tetracycline, indicating that the silent state was maintained after release of the initiator and thatthis phenotype was observed only in the case TetR-clr4-I, clr4+ + tet
of cells that also contained a WT copy of clr4+(Fig. 2A, right side; compare last two rows withfirst two rows). ChIP experiments verified that tetracycline addition promoted the release of Fig. 1. Ectopic heterochromatin is lost after sequence-specific establishment upon tetracycline TetR-Clr4-I from tetO sites (Fig. 2B). Consistent addition. (A) Diagram of experimental scheme for TetR-Clr4-I (TetR-Clr4-I)–mediated H3K9me at the with the colony color–silencing assays, ChIP-seq ura4D::10XtetO-ade6+ locus. Tetracycline (tet) promotes the release of TetR-Clr4-I from tetO sites so that and ChIP-qPCR experiments also indicated that initiator-independent maintenance could be tested. (B) Test of ade6+ silencing on low-adenine medium the large domain of H3K9 di- and trimethyla- in the absence (-tet) and presence (+tet) of tetracycline. Silencing of ade6+ results in formation of red colonies.
tion surrounding the 10XtetO-ade6+ locus was lost Centromeric ade6+ (otr1R::ade6) served as a positive control; the target locus alone (ura4D::10XtetO- in TetR-clr4-I, epe1D cells but was maintained ade6+) and ura4D::ade6+ cells served as negative controls. (C) ChIP-qPCR experiments assess the in TetR-clr4-I, clr4+, epe1D cells (Fig. 2C and fig.
association of FLAG-tagged TetR-Clr4-I with the 10XtetO-ade6+ locus in the presence and absence of S2, A to C) 24 hours after the addition of tetra- tetracycline. The dash on the x axis indicates background ChIP signal from cells that did not express TetR- cycline. Within this domain, the expression of Clr4-I. In the presence of tetracycline, TetR-Clr4-I occupancy is close to background levels. Error bars several other transcription units was silenced indicate SD. (D) ChIP-seq experiments show that TetR-Clr4-I induces a de novo H3K9me2 domain that on –tet medium, and this silencing was main- surrounds the tetO-ade6+ locus (highlighted in red) for 20 kb on either side, in cells with or without clr4+, tained for several hours after tetracycline addi- which is lost 24 hours after tetracycline addition. H3K9me2 ChIP-qPCR data and H3K9me3 for tion (fig. S3).
samples in (D) are presented in fig. S1. Chromosome 3 (site of insertion of 10XtetO-ade6+) and chro- Maintenance of the silent state in epe1D cells mosome 1 [centromere 1 left (cen1L)] coordinates are shown above the tracks, and read numbers (per required the HP1 proteins (Swi6 and Chp2) and million) are indicated on the right. H3K9me2 at DNA repeats of cen1L serves as an internal control for the Clr3 and Sir2 histone deacetylases (Fig. 3A) the ChIP-seq data.
3 APRIL 2015 • VOL 348 ISSUE 6230 sciencemag.org SCIENCE 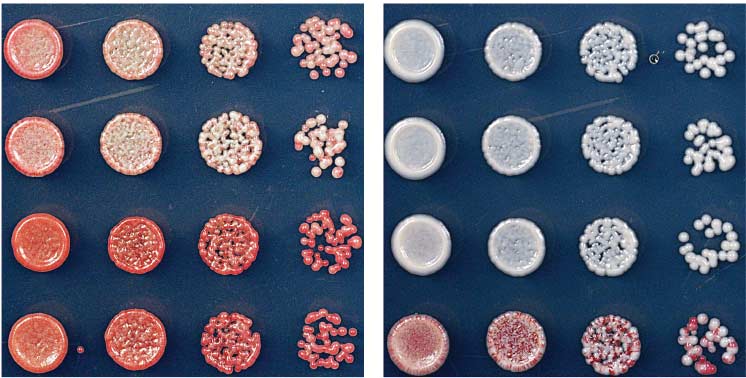 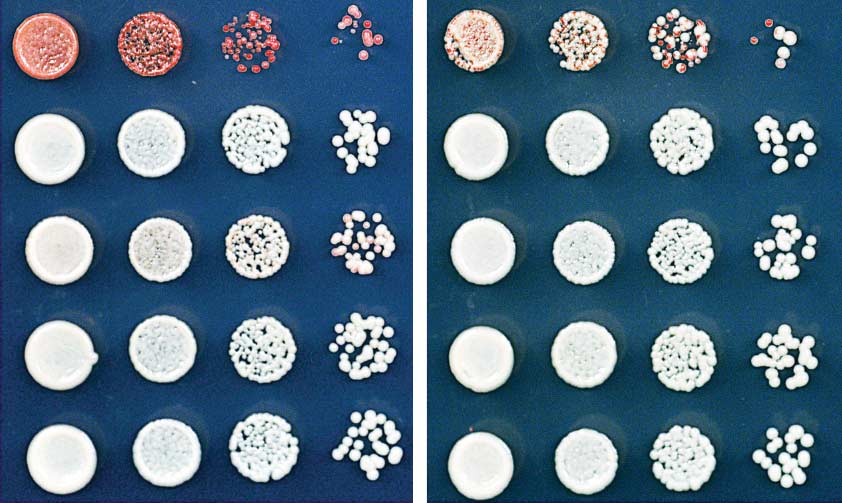 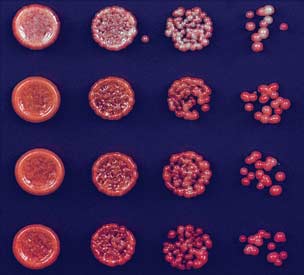 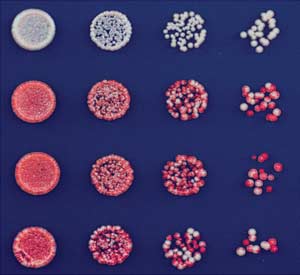 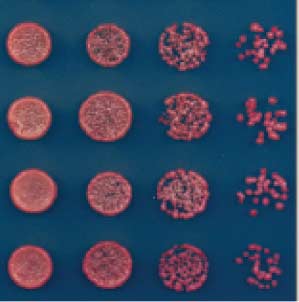