from Lester R. Brown, Eco-Economy: Building an Economy for the Earth (W. W. Norton & Co., NY: 2001) 2001 Earth Policy Institute®. All Rights Reserved.
Stabilizing Population by Reducing Fertility by Reducing Fertility World population has more than doubled since 1950. Those bornbefore 1950 are members of the first generation in history to wit-ness such a doubling during their lifetime. Stated otherwise, morepeople have been added to the world's population since 1950 thanduring the 4 million preceding years since we first stood upright.1 Throughout most of these 4 million years, we were few—num- bering only in the thousands. When agriculture began, world popu-lation was estimated at 8 million—less than a third the size of To-kyo today. After farming got under way, population growth slowlygained momentum. With the Industrial Revolution, it acceleratedfurther. After 1950, it soared.
We are struggling to understand the dimensions of population growth over the last half-century. We can relate to 100,000 people,the number filling a large stadium for an athletic event or a con-cert, but relating to an annual increase of 80 million is difficult. Tograsp the dimensions of this growth, we can equate it to the com-bined population of the United Kingdom, Belgium, Denmark, andSweden today. As someone who spends more time than I wouldlike in planes and airports, it is easier for me to relate populationgrowth to the passenger capacity of a jumbo jet. It takes the world's growing population less than 3 minutes to fill a jumbo jet with400 passengers.
Despite the stresses associated with continuing population growth, the United Nations projects that our numbers will growfrom 6.1 billion in 2000 to 9.3 billion in 2050. Of even more con-cern, all of the 3.2 billion additional people will be added in devel-oping countries. Given the analysis in this book, there is reason todoubt that this will actually happen. What is unclear is whetherthe projections will not materialize because we accelerate the shiftto smaller families in time or because we fail to do so and deathrates begin to rise.
Many countries that have experienced rapid population growth for several decades are showing signs of demographic fatigue. Gov-ernments struggling with the simultaneous challenge of educatinggrowing numbers of children, creating jobs for swelling ranks ofyoung job seekers, and dealing with the environmental effects ofpopulation growth are stretched to the limit. Without a concertedeffort by national governments and the international communityto shift quickly to smaller families, land scarcity and water short-ages could become unmanageable—leading to political instability,economic decline, and rising death rates.
In this situation, when a major new threat arises—such as the HIV epidemic or aquifer depletion—governments often cannotcope. Problems routinely managed in industrial societies are be-coming full-scale humanitarian crises in many developing ones. Asthe HIV epidemic continues to spread, rising death rates in someAfrican countries will likely bring their population growth to ahalt. This rise in the death rate marks a tragic new development inworld demography.
The issue is not whether population growth will slow, but how.
In its 1998 update of long-range population projections, the UnitedNations reduced the predicted population for 2050 by some 500million. Two thirds of this reduction was due to fertility fallingfaster than projected. But the other one third was the result of aprojected rise in death rates, largely because of HIV in Africa. Forthe first time in nearly half a century of world population updates,projections were being reduced by rising mortality. The challengeis to slow population growth in all developing countries by lower-ing birth rates, because if we fail, it will be slowed by rising deathrates.2 Stabilizing Population by Reducing Fertility Breaking Out or Breaking Down
Today we find ourselves in a demographically divided world, one
where national projections of population growth vary more widely
than at any time in history. In most European countries and Japan,
population has stabilized or is declining; but in others, such as Ethio-
pia, Pakistan, and Saudi Arabia, population is projected to double
or even triple before stabilizing.
Demographers use a three-stage model to understand how popu- lation growth rates change over time as modernization proceeds.
In the first stage, birth and death rates are both high, resulting inlittle or no population growth. In the second stage, death rates fallwhile birth rates remain high, leading to rapid growth. In the thirdstage, birth rates fall to a low level, balancing low death rates andagain leading to population stability while offering greater possi-bilities for comfort and dignity than in stage one. It is assumed thatcountries will progress from stage one to stage three. 3 Today there are no countries in stage one; all are either in stage two or stage three. However, instead of progressing steadily for-ward toward stage three as expected, some countries are fallingback toward stage one as the historical fall in death rates is re-versed, leading the world into a new demographic era. If countriesdo not break out of the middle stage of the demographic transitionin a matter of decades, rapid population growth will eventuallyoverwhelm natural systems, leading to economic decline and forc-ing societies back into stage one as mortality rises. Over the longterm, there is no middle ground. Countries either break out orbreak down. Unfortunately, a number of countries, mostly in Af-rica, are showing signs of breaking down.
For the first time since China's great famine claimed 30 million lives in 1959–61, world population growth is being slowed by ris-ing death rates. (See Figure 10–1.) Although rapid populationgrowth continues in scores of countries, the world is beginning todivide into two parts: one where population growth is slowing asfertility falls, and another where population growth is slowing asmortality rises. One way or the other, population growth will slow.
That rising death rates from AIDS have already reduced the pro-jected population for 2050 by more than 150 million represents afailure of our political institutions unmatched since the outbreakof World War II.4 The world is starting to reap the consequences of past neglect of 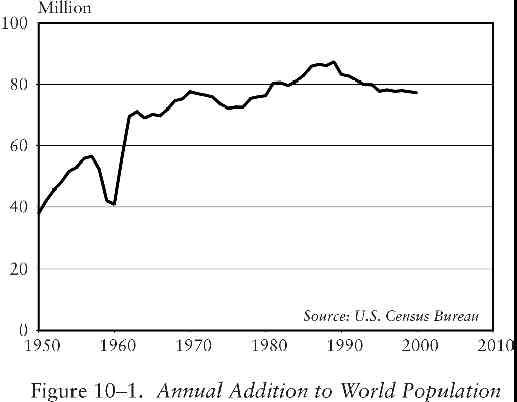 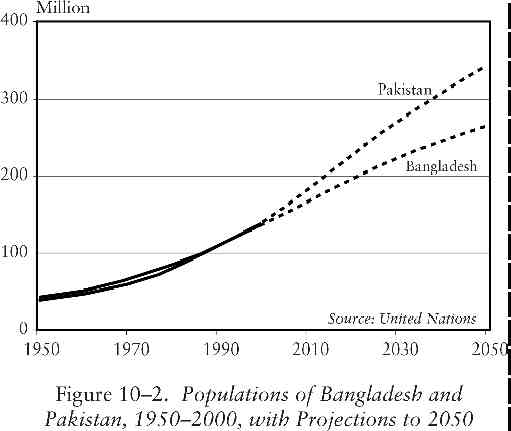 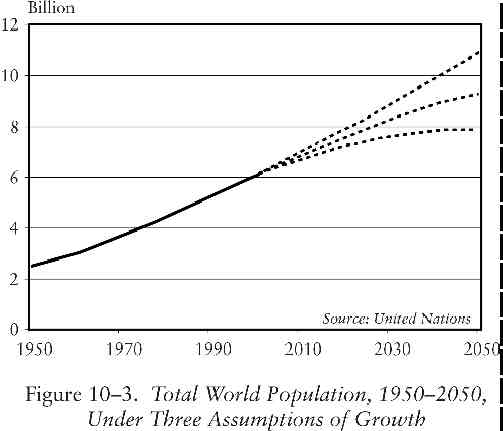 lion by 2050, and a low projection, which has population peakingat 7.9 billion in 2046 and then declining. (See Figure 10–3.)50 This low number assumes that the entire world will quickly move below replacement-level fertility to 1.7 children per couple.
This is not only achievable, it is the only humane population op-tion. Otherwise the land and water scarcity that is already increas-ing hunger and deaths in some countries could spread to manymore.
Achieving this lower figure is the responsibility of national po- litical leaders, but unless world leaders—the Secretary-General ofthe United Nations, the President of the World Bank, and the Presi-dent of the United States—urge governments and couples every-where to adopt a goal of two surviving children per couple, re-source constraints will likely lead to economic decline. The issuetoday is not whether individual couples can afford more than twochildren, but whether the earth can afford for couples to have morethan two children.

Drinks: Good Hosts The very name sends pleasurable sensations down one's throat! These drinks are everywhere, in myriad avatars - sending celebrities into swoons or into undertaking death defying feats!Sparkling and twinkling, creating a fizzy haze, making consumers down vast quantities of junk food, helped by the pleasurable gulps. We tested 16 brands - a merry mix of colas and orange drinks, the sparkling variety and