Supplies disruption and impact upon health sector in nepal 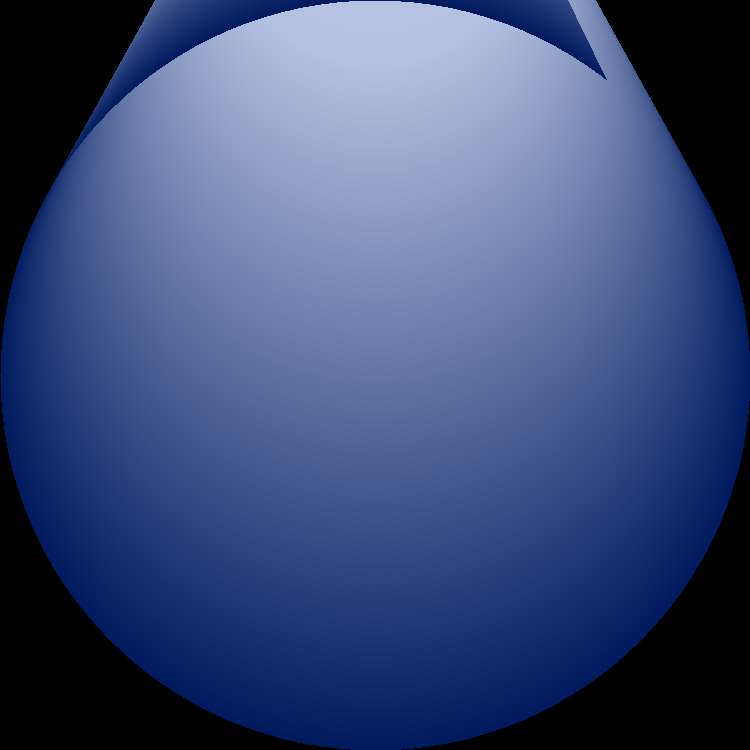 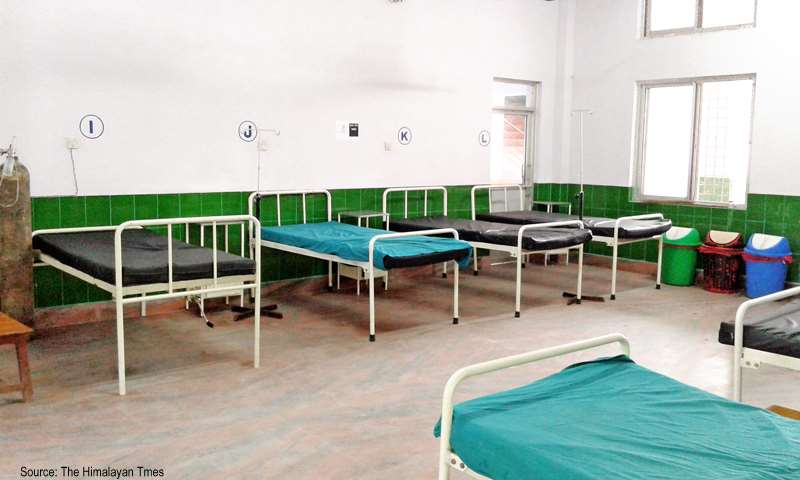 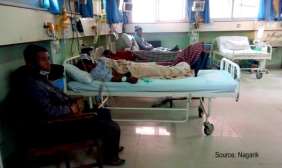 Number of patients visiting hospitals had declined significantly. Even if they reach the health facilities, due to the shortage of medicines. They were referred to other places. The number of patients visiting the health posts has been increasing with the onset of the winter season but the health posts are running out of medicines. People The supplies disruption had also posed living in about 20 VDCs in Mugu were serious threat to lives of children, elderly facing difficulties due to the shortage of and ailing people at the drugs. Patients who need to undergo as all the demolished surgery had been deprived of the service health facilities were in the same due to an acute shortage of vaccines in condition as they were after the Parsa. The shortage of a vaccine called devastating earthquake. Several aid Bupivacaine has deprived pregnant agencies had committed to rebuild women of their surgery. destroyed health facilities including district hospitals and had initiated National Center for Aids and STD works in some areas before the disruption in the supplies started. Due to the scarcity of raw materials and fuel in the district, reconstruction works had across the country were running out of distribution has been disrupted. stock, including those in the Tarai region. Over 13,000 people living with People were unable to utilize free service HIV, including 2,500 children, had been getting drugs from the ART centers other things. Lack of life saving drugs across the country. Due to the fuel crisis has created difficulty for patients and and volatile security situation the their family. The economically weak concerned bodies had not been able to patients and the disabled patients supply the life-saving drugs to the ART receiving treatment at the zonal hospitals have been affected. Lack of medicines for winter diseases have been creating havoc among patients. Black marketing of essential medicines also led the patients have been forced to pay additional amount. were having a 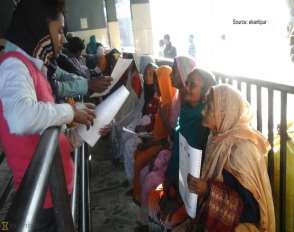 hard time as the dialysis centers have The leprosy patients going for treatment shortened their service period. Cancer at Leprosy Hospital, Lalgadh were patients were also in a difficult situation having difficulty as the as the medicines are difficult to find, the due to the shortage of oxygen and other essential medicines. The risk of radiotherapy not produced in Nepal. disability and blindness among the Government hospitals, health posts and patients due to halt in reconstruction primary health centers have been surgery has increased. More than 5 dozen patients were waiting for surgery. Patients who had been at the hospital awaiting surgery also feared that they might be affected badly as the surgeries have been halted. Doctors referred else medication, and health facilities have were but the lack of ambulance has been running out of emergency drugs. claimed a lot of lives. Along with the Nepalese the Hospital finding difficult to
provide services
the treatment cost more in India, a large Hospitals were having a hard time number of Indian citizens visit Nepal for treating patients. The shortage of life treatment. Indians coming for eye saving medicines made it difficult to treatment at Geta Eye Hospital in provide services. Health institutions Dhangadi had shown anger due to the had been compelled to problems they have been facing. As the Doctors had been stock of essential medicines and surgical equipment are getting short, many unavailability of necessary medicine. patients were forced to return without receiving the service. Due to the humanitarian crisis, the hospitals had been medicines are not imported the doctors say they have reduced medicines. Even medicines needed for children are not available. Services adversely affected at Narayani Sub-regional Hospital, Birgunj. Ongoing agitation had also thrown the Lumbini Zonal Hospital also ra Many concerned bodies urged the government to ease medical 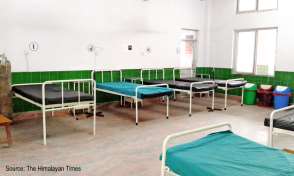 supply. Mechi Zonal Hospital started in the hospitals throughout the country including the capital. Even the due to the lack of blood. surgeries in big government hospitals were hampered. Hospital officials in Morang district demanded the government to ease the regular supply of petroleum products to provide health care services to the patients. surgery, ICU and CCU services, hemodialysis, x-ray, video x- Hospitals across the country saw sharp ray, ECG lab and other services. The drop in the flow of patients given the hospitals in the districts were also facing fuel crisis and also essential drugs and saline stock depleted fast. Likewise, the mobility of the ambulances has was Routine Programme hampered
Around 200,000 children have been Shortage of blood bags had been reported by many hospitals. It led to The national Vitamin A programme has problems in surgery and medication to been severely hampered. serious patients. Kidney Transplant Centre cut its services as due to the shortage of fuel the doctors. The Red Child Health Division Cross Society also could not collect CHD has been struggling to carry out enough blood and has not been able to immunization programmes at health deploy field workers due to the crisis. facilities across the country. Regular immunization programmes have been badly hit in several districts of the eastern Tarai region. University Teaching Hospital, Bir Hospital and Shahid Gangalal National Health workers, serving at the health Heart Centre, were fast running out of facilities of the region have said that their stocks of life-saving drugs, hundreds of children and pregnant including adrenaline and atrophin that women have been deprived of essential were used for heart patients. vaccines that protect them from deadly viruses. District Public Health Office, Banke said they The ongoing protests and supplies disruption has hit HIV patients as well. 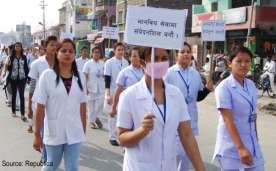 National Center for Aids and STD Members of civil society also expressed Control (NCASC) officials said that the concerns over the disruption in supplies center is struggling to continue the resulting in a grave humanitarian crisis antiretroviral medicines administered to in Nepal. A group of 12 members of the the people living with HIV. This disruption of supplies has also become including India to recognize reducing neonatal death and death the crisis and take effective steps to related to pneumonia and hypothermia. bring it to an immediate end. Concerns
supplies
Ministry of Health and Population disruption
(MoHP) warned that The supplies disruption has also gained the attention of the international bodies. Hospitals informed MoHP that they are about the drugs and supply shortage in not in a position to run hospitals any more as they essential drugs as well as organizations have emphasized the fuel to run ambulances and hospital seriousness of the present situation and generators and other drugs to sterilize its humanitarian implication. They medical accessories. Hospitals expressed expressed their commitment to ensure worries of spreading deadly diseases in safe access to quality health care the wards as they lacked drugs to services. They urged all concerned sterilized medical accessories. bodies to ease the supply of essential goods including vaccines and drugs. As the disruption in supplies started having serious implications on the health NMA blamed government in its failure in solving the crisis. NMA highlighted that operations which should not be The health workers of Biratnagar postponed are being postponed in the on November 27 after having absence of required medicines and serious problems in treatment of medicines required for emergency patients in lack of vital drugs. The health workers, who are working in various humanitarian crisis. NMA furthe hospitals in Biratnagar, and medicine and the agitating parties entrepreneurs said that they had to find a solution to the current crisis organize the protest programme as they through dialogue. were unable to work in an environment where they lack security of their own The Ministry of Health and Population lives. They expressed concerns over the (MoHP) also informed that it has asked condition of patients struggling to find further urged the agitating parties and in the wake of the acute the government to keep medical sector scarcity of essential medicines. MoHP free from politics. has also asked all international aid agencies, including Direct Relief, to Government efforts
provide essential medicines to Nepal. Government of Nepal has been making Direct Relief is an international charity efforts to provide necessary goods to the people. A task-force formed by the provided medicines to Nepal in the The task-force led by Balkrishna The Ministry of Health and Population Khakurel, Director General of the (MoHP) also considered Department of Drug Administration, said immediate efforts would be made to make medicines available to health Department of Drug Administration (DDA) has also encouraged the national In order to tackle the current crisis the drug manufacturing companies to boost government planned to use stock of their production following the supplies drugs that were meant to be used only disruption. The DDA has also told those companies to be prepared to import The Department of Health chemicals from Bangladesh and other Services (DoHS) has decided to use the countries via air cargo. medicines that are kept in all five regions of the country as part of the Emergency CONCLUSION
Assistance. The decision was made after The earthquake of April 2015 was an the a majority of hospitals and health unpleasant experience for all Nepalis. institutions have ran short of many The Government of Nepal needs to be essential and life-saving drugs affecting acknowledged for its efforts in terms of the lives of patients. crisis management during that period. Lessons from the experiences gained The Ministry of Health and Population during that period also highlighted the also got ready for need for improvement in development in a bid to ease supply of drugs in the country. The MoHP is preparedness plan in order to handle planning to procure 105 types of emergency situation of many sectors essential drugs worth Rs 200 million for including health. With the greater initiation of the Ministry of Health and

Population, along with support from private sector, various development partners, NGOs, local communities, foreign medical teams and several voluntary associations and groups; the emergency situation was managed to some extent. Now, with crisis of the earthquake aggravated with another man-made disaster through supplies disruption, it has become more important than ever to develop a comprehensive management response plan for such crisis situations so as to be more prepared in the future. With the comprehensive response plan in place; a greater preparedness is required with regards to adequate skilled human resources, infrastructure, data management information Preparedness Unit in health with well-equipped resource and logistics is the need of the hour. This unit needs to be operational not only at the central level but also in regional level, and in strategic locations so that the response initiatives can be immediately as the situation demands. Corresponding Author:
Health Research and Social Development Forum (HERD) Thapathali, Kathmandu, Nepal URLEma