Prepared on behalf of IHPA Note from Editors 1. Malaria - tiny mosquito that daunts the world 2. POPs contaminated sites 3. European Commission, Environment DG May 1, 2009 4. Conference of Parties COP4 to Stockholm Convention: Geneva, May 4-8, 2009 5. Brief notes on a HCH contaminated site in Brazil: Environmental (in)justice? 6. Obsolete pesticides a ticking time bomb and why we have to act now 7. Hot from the press 8. The 10th IHPA Forum The aim of this newsletter is to disseminate information in a cost-effective way on the developments taking place in the area of POPs as implicated in the Stockholm Convention and other PTS of concern. It will cover, among others, the news on science and technology for disposal of obsolete stocks and remediation of POPs contamination which might be of interest for commercial exploitation both in developed and developing countries. Special emphasis will be given to bio-remediation, non-combustion related technologies which will benefit developing countries. The newsletter will not go into technical details of selected scientific publications but only highlight salient features for the benefit of the readers. One can subscribe and read IHPA Newsletter (2 times/yr free of Note from the Editors This Newsletter is coming out a few months before the 10th IHPA Forum to be held in Brno from Sept. 7-9, 2009 under the leadership of our co-editor Prof. Ivan Holoubek. In this issue we are having a brief review on Malaria written by the editor to commemorate April 24 which was Malaria day. During this period we had he 4th COP meeting of POPs in Geneva and we have an abstract of an interesting paper on POPs contaminated soil published in a journal - Environmental Science.
The publishers of the journal through Dr. Roland Weber has given free access to the readers for a limited period.
1. Malaria - tiny mosquito that daunts the world Lange Allee 1, Vienna, Austria e-mail: < [email protected]> The author is an organic chemist and was involved in total synthesis if cinchona alkaloids with Prof. Marshall Gates and worked in UNIDO on pesticide safety in agriculture and public health use. Currently he is a freelance consultant. This article is published to commemorate the Malaria day which fell in April 2009. 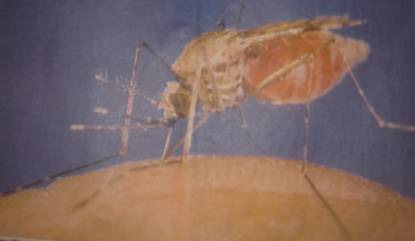