Drugs and chemicals: Cimetidine was obtained from Unique Chemicals and Pharmaceuticals
Ltd., India. Omeprazole was obtained from Dr. Reddy‟s Laboratories, India. Epinephrine,
reduced glutathione and oxidized glutathione, were obtained Sigma Aldrich Chemicals,
Germany. Thiobarbituric acid (TBA) and trichloroacetic acid (TCA) were obtained from
Himedia Laboratories, Mumbai, India. All other chemicals were obtained from local sources and
were of analytical grade.
Extraction: Tuber Extract (TE): The tubers of sweet potato were size reduced, dried at 600C and
extracted with methanol by using a soxlet apparatus at 600C. The extract was collected and put
Functional Foods in Health and Disease 2012, 2(3):48-61 Page 50 of 61
on a water bath to evaporate the methanol; the extract was further dried in vacuum oven. The
dried TE was dissolved in water to get a clear red solution, which used for administration.
Experimental animals: Wistar albino rats (150-200 g) of either sex were used. They were
housed in clean polypropylene cages under standard conditions of humidity (50 ± 5 %),
temperature (25±2°C) and light (12 h light/12 h dark cycle) and fed with a standard diet (Amrut
laboratory animal feed, Pune, India) and water ad libitum. All animals were handled with
humane care. Experimental protocols were reviewed and approved by the Institutional Animal
Ethics Committee (Animal House Registration No.25/1999/CPCSEA) and conform to the Indian
National Science Academy Guidelines for the Use and Care of Experimental Animals in
Research.

Acute toxicity study (ALD50): Acute toxicity studies were carried out on Wistar rats by the oral
route at dose levels up to 2000 mg/kg of the tuber extract of Ipomoea batatas as per the OECD-
guidelines No.402.

Anti-ulcer activity: Adult Wistar albino rats of either sex weighing 180-200 g were used for the
study. The effects of the tuber extract were evaluated on cold stress and aspirin induced ulcer
models in rats. Cimetidine was used as a standard drug for the cold stress induced ulcer model
and omeprazole was used as a standard drug for the aspirin induced ulcer model for comparing
the anti-ulcer potential of the extract.
COLD RESTRAINT MODEL (stress induced ulceration) [13]
Albino Wistar rats of either sex were divided into five groups with six animals in each group as
follows:
Group I: Control (untreated) group.
Group II: Stress control group
Group III: Standard treatment group (cimetidine 100 mg/kg)
Group IV: Test treatment group ( TE 400 mg/kg)
Group V: Test treatment group ( TE 800 mg/kg)
Stress was induced by immobilizing the animals in a cylindrical cage (19.5cm length, 6.5cm diameter), at 4˚C for 1 hour daily for 7 days. On the 7th day animals were humanely sacrificed using ether and the stomachs were excised. Ulcers were observed under magnifying glass for measuring the area of ulcers and the ulcer index was calculated. The stomachs that were excised from the control and treated groups were weighed and chilled in ice cold saline after evaluation of the above parameters, 10% stomach homogenate was
prepared in KCl (1.15% w/v) which was further utilized for estimation of various parameters like
lipid peroxidation (LPO) and endogenous antioxidants like glutathione (GSH), superoxide
dismutase (SOD), catalase (CAT), glutathione peroxidase (GPx) and glutathione reductase (GR).

ASPIRIN INDUCED GASTRIC ULCERATION [14, 15]
Albino Wistar rats of either sex were divided into five groups with six animals in each group as
follows:
Functional Foods in Health and Disease 2012, 2(3):48-61 Page 51 of 61
Group I: Control (untreated) group Group II: Toxicant group (aspirin 200 mg/kg) Group III: Standard treatment group (omeprazole 20 mg/kg) Group IV: Test treatment group ( TE 400 mg/kg) Group V: Test treatment group ( TE 800 mg/kg) All rats were fasted for 24 hours but excess water was allowed. The standard drug (omeprazole 20 mg/kg) and the test drugs (TE 400 and 800 mg/kg) were administered orally to the respective groups. One hour after their pretreatment, all animals were gavaged with aspirin (200 mg/kg). After 4 hours, they were humanely sacrificed by using diethyl ether. The numbers of ulcer spots in the glandular portion of the stomach were counted in both normal control and drug treated animals and the ulcer index was calculated. The stomach was further tested for LPO, GSH, SOD, CAT, GPx and GR. Following parameters were evaluated for anti-ulcer activity
1) Ulcer assessment [16]
The stomachs were harvested, opened along the greater curvature and the mucosa was exposed for macroscopic evaluation. The ulcerated area was assessed and the ulcer index (UI, mm2) was calculated as the arithmetic mean for each treatment. Following the analysis, the mucosal layer was blotted dry and scraped off the underlying muscularis externa and serosa. 2) Mean scoring [16]
A yardstick for ulceration was made as follows: 00: Normal colouration 0.5: Red colouration 1: Spot ulcers 1.5: Haemorrhagic streaks 2: Ulcers >3mm but <5mm 3: Perforation 3) Ulcer index [17]
Ulcer index was calculated as Ulcer index=10/x Where x = Total mucosal area/Total ulcerated area. DETERMINATION OF BIOCHEMICAL PARAMETERS:
Estimation of antioxidants and protein content in gastric tissue: The GSH level in the
stomach tissue was determined according to the method of Ellman [18]. Gastric SOD activity
was estimated by the method of Sun and Zigman [19]. CAT activity was estimated by the
Clairborne et al method [20]. GPx estimation was carried out using the method of Rotruck et al
[21]. GR activity was determined by using the method of Mohandas et al [22]. The protein
content of the gastric tissue was determined by the Folin Lowry Method using bovine serum
albumin as standard [23].

Estimation of thiobarbituric acid reactive substances (TBARS) in gastric tissue [LPO]: The
quantitative estimation of LPO was done by determining the concentration of Thiobarbituric 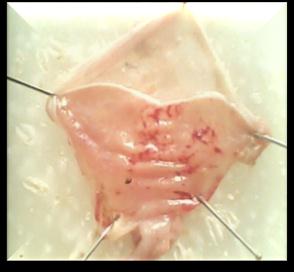 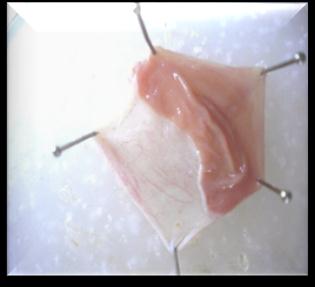 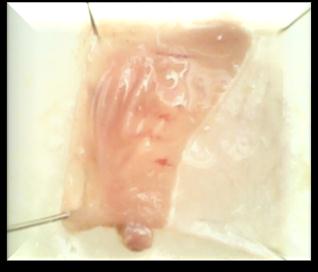 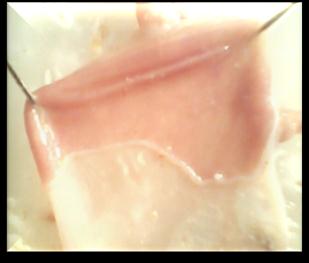 Functional Foods in Health and Disease 2012, 2(3):48-61 Page 52 of 61
Acid Reactive Substances (TBARS) in gastric tissue using the method of Ohkawa & Yagi [24].
The amount of malondialdehyde (MDA) formed was quantified by reaction with TBA and used
as an index of lipid peroxidation. The results were expressed as nmol of MDA/mg protein using
molar extinction coefficient of the chromophore (1.56 × 10-5/M/cm) and 1,1,3,3-
tetraethoxypropane as standard.

Statistical analysis: The results of anti-ulcer activity are expressed as mean ± SEM. Results
were statistically analyzed using one-way ANOVA, followed by the Tukey–Kramer post test for
individual comparisons. P<0.05 were considered to be significant.
RESULTS:
The images of the stomachs of the groups viz., Control, Standard and treatment groups (2 dose
levels of TE) in CRS (Figures 1-4) and aspirin-induced gastric lesion models (Figures 5-8) are
shown below.
Observations of ulcers in cold restraint model 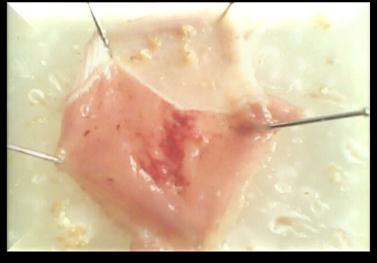 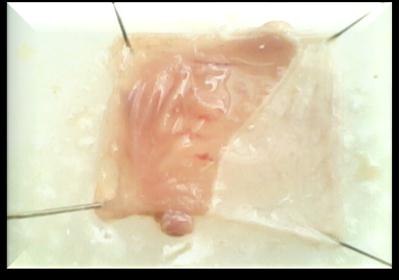 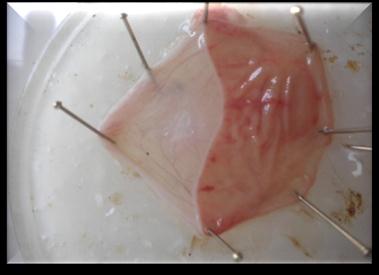 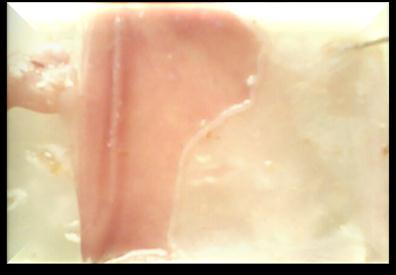 Marked ulcers along with hemorrhagic streaks and mucosal damage were seen in the images of
the toxicant group in the CRS (Figure 1) and the aspirin-induced gastric lesion model (Figure 5).
The images of the treatment groups showed signs of recovery from stress and ulcers and also
provided supportive evidence for the biochemical analysis (Figures 3-4 and 7-8).
Effect of TE on ulcer index and percentage lesion inhibition: The anti-ulcer activity of TE in
CRS and aspirin-induced gastric lesion models is reported in Tables 1 and 2 respectively. TE
treatment produced a significant reduction of the ulcer index (U.I.) (TE 400 mg/kg, P < 0.05; TE
800 and standard, P < 0.01) when compared with the stress control group in the CRS model and
the toxicant group in the aspirin induced ulcer model. The percentage lesion inhibition for TE
400 and TE 800 mg/kg was 23.13% and 38.48%, respectively in the CRS induced ulcer model
and 43.71% and 64.99%, respectively in the aspirin-induced gastric lesion model.

CONCLUSION:
In conclusion, this study demonstrates that the tubers of Ipomoea batatas possess a potent ulcer
healing effect, which appears to be related to the free radical scavenging activity of the phyto
constituents, and their ability to inhibit lipid peroxidative processes. The present study, thus,
aims to highlight the health benefits of sweet potato, establish it as a potent "functional food"
and promote its use as a vegetable to enrich people‟s diets.
Competing interests: The authors declare that they have no competing interests.
Authors' contributions: Vandana Panda, conceived, designed, co-ordinated and supervised the
study and the writing of the manuscript. Madhav Sonkambale, initiated the study, carried out the
Functional Foods in Health and Disease 2012, 2(3):48-61 Page 59 of 61
experimental, performed statistical analysis and drafted the manuscript. All authors read and
approved the final manuscript.
Acknowledgement: We would like to thank Glenmark Pharmaceuticals Ltd. Mahape, Navi
Mumbai for providing animals for this research work.