JOURNAL OF GEOPHYSICAL RESEARCH, VOL. 109, C09S14, doi:10.1029/2003JC001909, 2004 Dissolved and particulate organic carbon in the Sea of Okhotsk: Transport from continental shelf to ocean interior Takeshi NakatsukaInstitute of Low Temperature Science, Hokkaido University, Sapporo, Japan Mari TodaGraduate School of Environmental Earth Science, Hokkaido University, Sapporo, Japan Kimitaka Kawamura and Masaaki WakatsuchiInstitute of Low Temperature Science, Hokkaido University, Sapporo, Japan Received 14 April 2003; revised 10 May 2004; accepted 8 June 2004; published 21 August 2004.
Dissolved and particulate organic carbon (DOC and POC) were measured in water columns of the Sea of Okhotsk together with other hydrological and chemical properties,including phytoplankton pigments (Chl-a) and stable carbon isotopic ratios (d13C) ofPOC. Transects from shelf to slope off the northeast coast of Sakhalin showed theexistence of a cold-water mass in the intermediate layer on the slope area having a densityof 26.7 – 27.0 sq, which is equivalent to the cold and dense water on the shelf (dense shelfwater: DSW). The cold intermediate water mass was rich in DOC, POC, and Chl-a,and the d13C of POC was high, similar to that in DSW, indicating that the organic matter inthe cold intermediate water is exported from the highly productive shelf area by theoutflow of DSW. On the other hand, surface waters near the coast of northern Sakhalin hada very low salinity, which must be affected by the fresh water discharge from the AmurRiver. The low-salinity water contained a large amount of DOC that was more than3 times greater than the pelagic surface waters. The linear regression line between thesalinity and the DOC in the surface layer of the studied area indicates that the Amur Riverwater contains approximately 690 mM of DOC, and the input of DOC from the Amur tothe Sea of Okhotsk was estimated to be approximately 2.5 TgC/yr. The relationshipsbetween the temperature and the DOC and POC along a density surface from 26.7 to 27.0 sqsuggest that DOC and POC in the DSW are transported into the intermediate layer of thepelagic region without being removed at the shelf edge. Simple estimates for additions oforganic carbon into the intermediate layer of the area off the east coast of Sakhalin suggeststhat DSW outflow from the shelf brings into this layer approximately 13.6 and 0.9 TgC/yrof DOC and POC, respectively. These fluxes are much larger than the sinking POC fluxfrom the in situ surface water, and so are fundamental in characterizing thebiogeochemical cycles in the Sea of Okhotsk.
INDEX TERMS: 4806 Oceanography: Biological and Chemical: Carbon cycling; 4805 Oceanography: Biological and Chemical: Biogeochemical cycles (1615);4219 Oceanography: General: Continental shelf processes; KEYWORDS: DOC, POC, Sea of Okhotsk Nakatsuka, T., M. Toda, K. Kawamura, and M. Wakatsuchi (2004), Dissolved and particulate organic carbon in the Sea of Okhotsk: Transport from continental shelf to ocean interior, J. Geophys. Res., 109, C09S14, doi:10.1029/2003JC001909.
nental shelf, the carbon cycle of the shelf has not yet beenclarified in detail because the water circulation systems in [2] In the global carbon cycle, the continental shelf must coastal areas are usually very complicated and the dissolved play a special role because the shelf acts as an interface, and particulate organic carbons (DOC and POC) are trans- exchanging organic and inorganic carbon materials between ported by various physical mechanisms between coastal and land and ocean. Moreover, the continental shelf usually has very high biological productivity reflecting macro- and [3] Recently, Bauer and Druffel [1998] claimed that ocean micro-nutrient inputs from river mouths, which results in margins including the shelf and slope areas act as a signif- the absorption of a large amount of carbon dioxide from the icant source of organic matter for the deep open ocean, based atmosphere. In spite of the great importance of the conti- on the horizontal difference of profiles of 14C in DOC andPOC between the central and eastern North Pacific waters.
Hansell et al. [2002] suggested that the DOC in the North Copyright 2004 by the American Geophysical Union.
0148-0227/04/2003JC001909$09.00 Pacific Intermediate Water (NPIW) is refreshed by the input 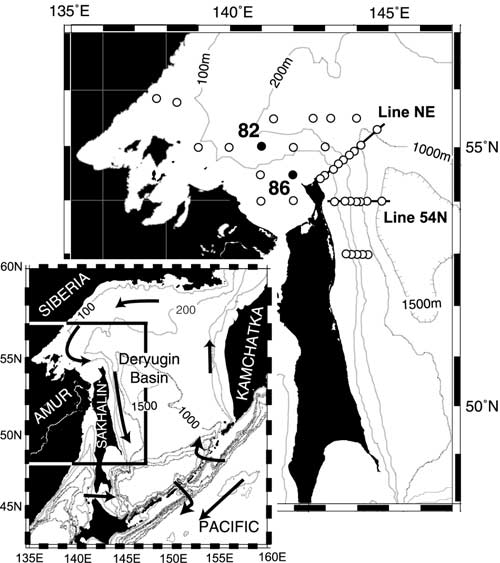 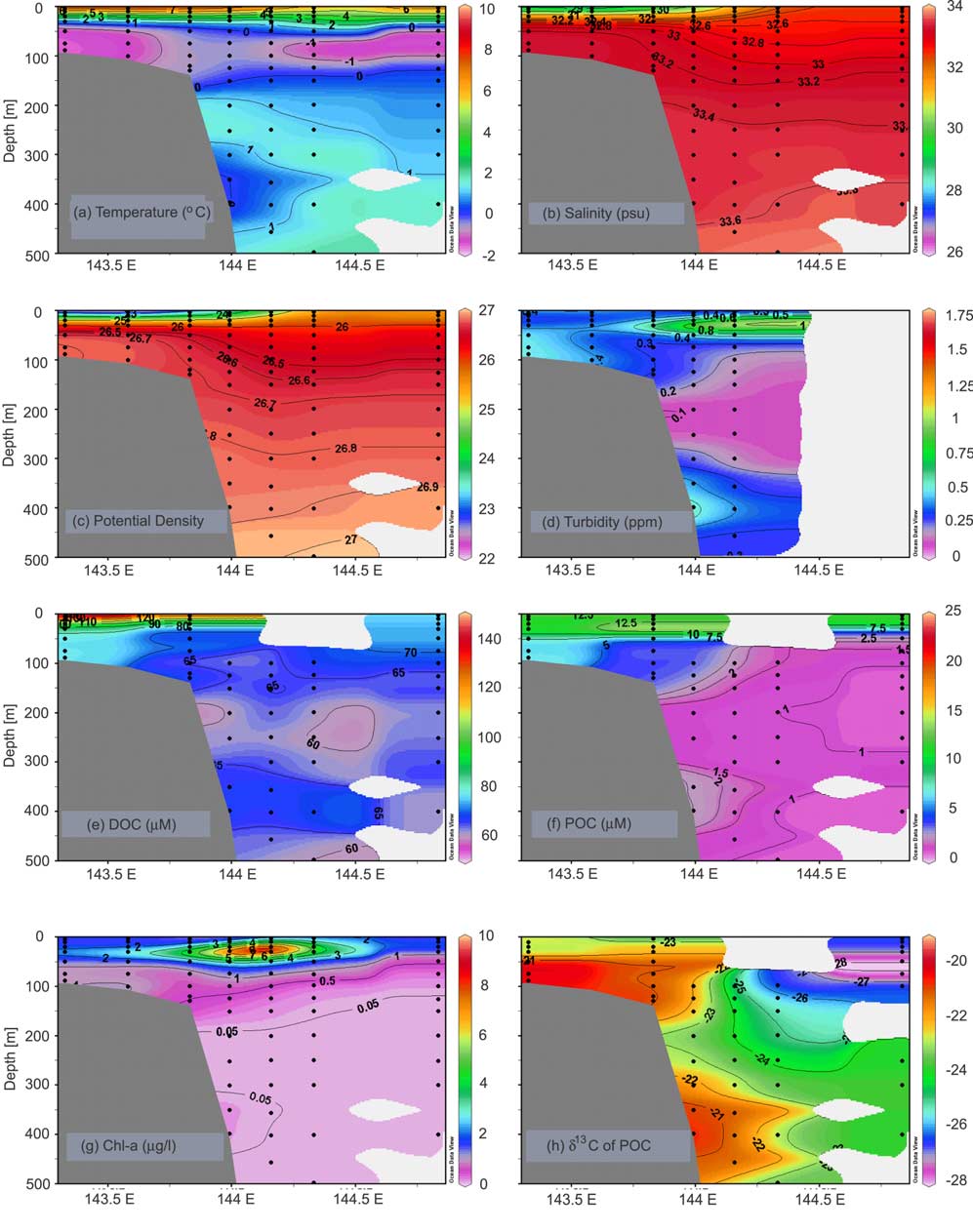 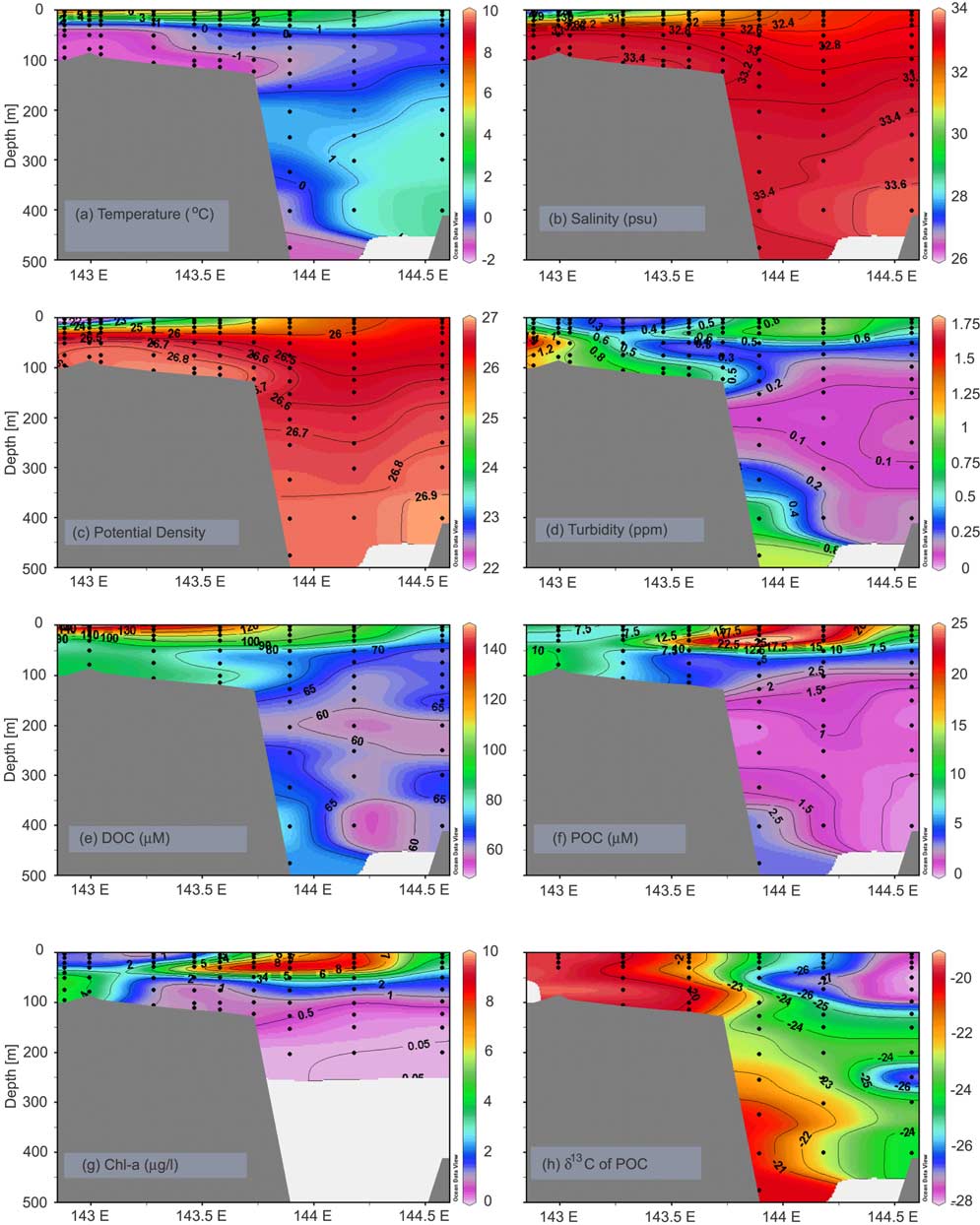