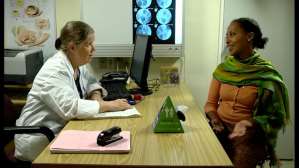 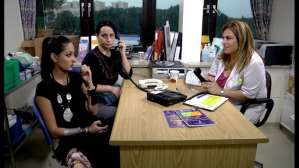 The Jerusalem Intercultural Cente سدقلا يف تا فا قثلا نيب راوحلا زكر م )ר"ע( םילשוריל יתוברת-ןיבה זכרמה Appendix 5: Training films on cultural competence in Israel
As a result of cooperation between the Jerusalem Intercultural Center and researchers and lecturers at Bar-Ilan University, four training films dealing with cultural competence in the field of health and welfare were made. The films, which are deeply rooted in Israel's reality, describe clinical encounters between health- service providers and a patient and present the culturally dependent gaps and barriers between them. The films provide a setting for an active discussion, which is a crucial part of the integration of the principles of cultural competence and the inculcation of practical tools in this area. The four films are based on true cases. The film "Knows What She Wants" describes a meeting between a patient from the Ethiopian
community, who wishes to receive the Depo Provera contraceptive shot to prevent pregnancy, and her GP, who tries to convince her to use other methods of contraception. The film "Checkup" presents a meeting between a Russian-speaking patient who comes for a
regular diabetes follow-up visit accompanied by her Hebrew-speaking teenage daughter, and a Hebrew-speaking nurse. In the film "Our Decision" a Muslim Arab woman is hospitalized after doctors discover a
cancerous tumor of the thyroid gland; she is torn between the recommendation made by the doctor (also a Muslim Arab), who believes that surgery to remove the tumor must be performed [email protected], WWW.JICC.ORG.IL
The Jerusalem Intercultural Cente سدقلا يف تا فا قثلا نيب راوحلا زكر م )ר"ע( םילשוריל יתוברת-ןיבה זכרמה immediately, and the position taken by her husband, who insists that she should be released immediately from hospital. The film "For the Children" takes place in a welfare office, the setting for a highly charged
meeting between a social worker and an ultra-Orthodox couple in Jerusalem regarding the temporarily removal and transfer of the children to the home of a relative. All the films are subtitled in Hebrew, Arabic and English. Each film focuses on a different cultural group, but each can contribute to a discussion of the principal core subjects in the field of cultural competence. The films are part of a comprehensive training project in cultural competence. Instructors trained by the JICC can make use of these films when providing training in their health organizations. To that end, the JICC proposes that health organizations hold training courses for facilitators in the field of cultural competence, which will enable the organizations to hold internal training in this field and adapt the content of the workshops to the needs of the specific health [email protected], WWW.JICC.ORG.IL

N e w s l e t t e r vol. 10, no. 4 - 2007 "the recent initiative of EU Commission to identify "lead markets for biobased products" has shown that there is a need for realistic surveys in the EU-markets for RRMs and RRM based products.In the last edition of Green Tech letters 3/2007 the French Agency ADEME published the results of the ALCIMED survey on existing markets and future perspectives in France.