Allergy 2007: 62: 842–856 ! 2007 The Authors Journal compilation ! 2007 Blackwell Munksgaard Nonallergic angioedema: role of bradykinin Angioedema is an underestimated clinical problem. Many cases are nonallergic M. Bas1, V. Adams2, T. Suvorava3, reactions, e.g. bradykinin-induced angioedema caused by genetic defects and T. Niehues4, T. K. Hoffmann1, angiotensin-converting enzyme (ACE) inhibitors. This diﬀerence is crucial for successful therapy, in particular when complete emergency care is not avail- 1Hals-, Nasen- und Ohrenklinik, Universit!tsklinikum able. Five important forms of nonallergic angioedema can be distinguished: D"sseldorf, D"sseldorf; 2Herzzentrum Leipzig GmbH, hereditary (HAE), acquired (AAE), renin-angiotensin-aldosterone system Universit!tsklinikum Leipzig, Leipzig; 3Institut f"r (RAAS)-blocker-induced (RAE), pseudoallergic angioedema (PAE) and idio- Pharmakologie undKlinische Pharmakologie, pathic angioedema (IAE). Some angioedema are present in the larynx and may Universit!tsklinikum D"sseldorf, D"sseldorf; 4Klinikf"r Kinder-Onkologie, -H!matologie und - cause death. A vast majority of nonallergic angioedema are RAE, particularly Immunologie, Universit!tsklinikum D"sseldorf, those caused by ACE inhibitors. It appears important to emphasize that in D"sseldorf, Germany patients with complete intolerance to RAAS-blockers, cessation of RAAS-blockers is likely to be associated with increased cardiovascular risk. Currently,there is no published algorithm for diagnosis and treatment. Angioedema is Key words: allergy; angioedema; angiotenin II receptor usually treated by a conservative clinical approach using artificial ventilation, type 1 antagonists; angiotensin-converting enzyme glucocorticoids and antihistamines. Today, a plasma pool C1-esterase inhibitor inhibitors; bradykinin; C1-INH; ecallantide; icatibant.
(C1-INH) concentrate is the therapy of choice in HAE. The current phar- Georg Kojda PharmD, PhD macotherapy of nonallergic angioedema is not satisfactory, thus requiring the Institut f"r Pharmakologie und Klinische identification of eﬀective agents in clinical trials. Recently, several new drugs were developed: a recombinant C1-INH, a kallikrein inhibitor (ecallantide) and a specific bradykinin-B2-receptor antagonist (icatibant). According to currently available reports, these drugs may improve the treatment of kinin-induced Accepted for publication 14 April 2007 Angioedema is a swelling of the mucosa and/or submu- IAE). A vast majority of these forms of angioedema are cosa of the skin which may impair breathing and is induced by increased bradykinin levels (2) and are the potentially life-threatening (1). Swelling of the head-and- focus of this review. In contrast, many angioedema must neck regions, particularly in the pharynx and the larynx, be classified as IAE. For example, patients with chronic often require emergency treatment and several days of urticaria develop nonallergic angioedema in the absence hospitalization. Other manifestation locations are the of drug therapy or C1-INH deficiency (3). Pseudoallergic gastrointestinal tract, the gential region or the extremities.
angioedema is a diﬀerent form of drug-induced nonaller- Beside the well-known forms of allergic angioedema, gic angioedema and is mediated by a so-called pseudo- many forms of nonallergic angioedema are known and a allergic process which is presumably linked to the vast majority of these are caused by increased plasma and mechanism of action of the triggering drug. For example, tissue concentrations of bradykinin. Thus, these forms of the pseudoallergic reaction to aspirin is thought to be a angioedema share a similar pathophysiology.
result of the inhibition of cyclo-oxygenase and subse-quently increased generation of cysteinyl-leukotrienes (4).
Forms of angioedema Epidemiology of angioedema In general, angioedema can be allergic or nonallergic,which basically means immunoglobulin (Ig) E-mediated In people with HAE, heterozygous C1-INH deficiency or not IgE-mediated, respectively. Nonallergic angioede- results in autosomal-dominant inheritance with an inci- ma might be caused by hereditary disposition or is of dence of 1:50 000 and there are no diﬀerences depending iatrogenic origin, and can be divided into five diﬀerent on ethnic groups or sex (5). In contrast, AAE is a rare types (Fig. 1): hereditary (HAE), acquired (AAE), condition (6, 7). The incidence of RAE induced by ACEi RAAS-blocker-induced (RAE), pseudoallergic angioede- has been estimated with great variety which is most likely ma (PAE) and idiopathic angioedema (unknown cause, due to race diﬀerences. For example, in white Caucasians, 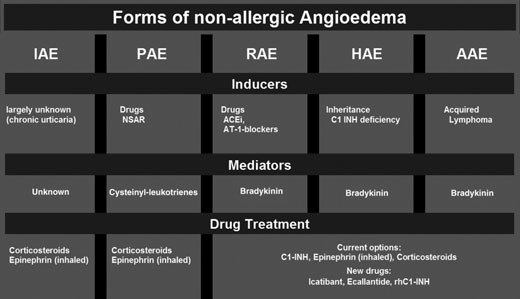 Nonallergic angioedema Figure 1. Diﬀerent forms of angioedema (HAE: hereditaryangioedema, PAE: pseudoallergic angioedema, RAE: RAAS-blocker-induced angioedema, AAE: acquired angioedema).
the frequency of ACEi-induced angioedema is reported to mouse chromosome 7 (16). It is expressed in several range between 0.1% and 0.7% (1, 2, 5, 8, 9), while Black tissues like kidney, blood vessels, pancreas, gut salivary, people show a much greater susceptibility (10). In fact, a spleen, adrenal and neutrophils (17–20). From a cardio- recent meta-analysis investigating adverse reactions to vascular viewpoint, the kallikrein-kinin system is thought drugs used in cardiovascular medicine found a relative to antagonize the eﬀects of the RAAS, and is closely risk of 3.0 for the development of ACEi-induced angi- related to this system (Fig. 2). The functional coupling oedema among Black compared to White people (11).
between the two systems is illustrated by angiotensin- Based on roughly 6.5 million users of ACEi in converting enzyme (ACE) whose two active sites are able Germany and on an average frequency of angioedema to generate angiotensin II from angiotensin I and to of 0.3%, approximately 20 000 cases of ACEi-induced degrade kinins into inactive peptides (21, 22).
angioedema will be expected to occur. Thus, the calcu-lated incidence approaches 1 : 4000 demonstrating that Bradykinin receptors and signal transduction ACEi-induced angioedema, which represents the majorityof RAEs, appears to be much more frequent than HAE Kinin receptors are cell surface, G-protein-coupled re- (12). Interestingly, AT-1-blockers appear to induce RAE ceptors of the seven-transmembrane family. So far, two but with a lower frequency than ACEi (2) and this subtypes of the receptor – the bradykinin receptor type 1 estimation has been confirmed in large clinical trials (13).
(BKR-1) and the BKR type 2 (BKR-2) – are identified, There are no data on the epidemiology of angioedema based on their pharmacological properties (23–26) and on caused by pseudoallergic reactions to drugs.
expression cloning (27–29). The human BKR-2 gene islocated on chromosome 14q32 (30), whereas the BKR-1has been mapped to chromosome 14q32.1–q32.2 (31). At Bradykinin in the human body the amino acid level, the BKR-1 and the BKR-2 shareonly 36% sequence homology (29). The BKR-1 is The kallikrein-kinin system synthesized in a variety of diﬀerent organs de novo The discovery of the kallikrein-kinin system dates back to following tissue injury (31, 32), whereas the BKR-2 is 1909, when Abelous and Bardier demonstrated the constitutively expressed in a larger number of tissues (33).
hypotensive eﬀect of urine (14). Kinins are pharmaco- Bradykinin is thought to be one of the most potent logically active peptides released into body fluids and into vasodilatators, as it is capable to liberate three important tissues as a result of the enzymatic action of kallikreins on endothelium-derived vasodilatory mediators: NO, pro- kininogens. Kinins are a family of peptides, including stacyclin (PGI2) and endothelium-derived hyperpolariz- bradykinin, kallidin and methionyl-lysyl-bradykinin, of ing factor (EDHF; 34). It is generally accepted that the which kallidin and methionyl-lysyl-bradykinin are con- activation of the BKR-2 on endothelial cells leads to an verted very rapidly into bradykinin via the action of activation of phospholipase C gamma via a transient aminopeptidases present in the plasma and urine (15).
Tissue kallikrein (EC 3.4.21.35), which diﬀers signifi- increased formation of inositol 1,4,5-triphosphate (IP3) cantly from plasma kallikrein, is encoded by the KLK1 and diacylglycerol (35, 36). As a consequence of an gene located on human chromosome 19q13.2–q13.4 and elevated IP3 concentration, intracellular calcium rises by 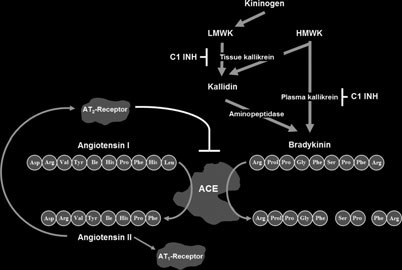 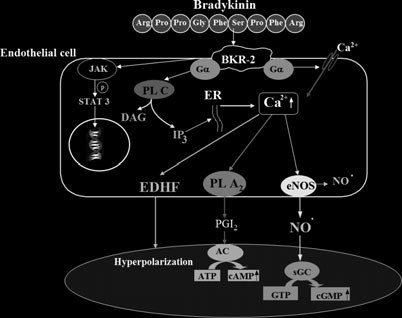 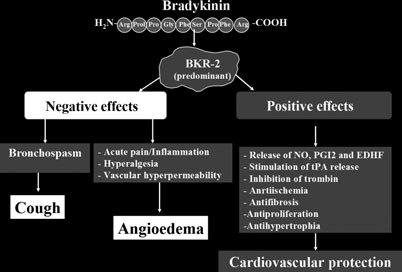 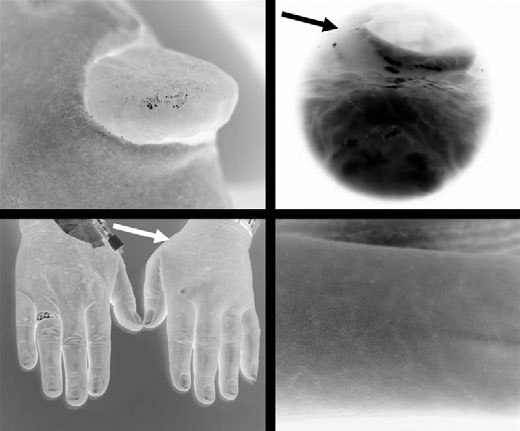 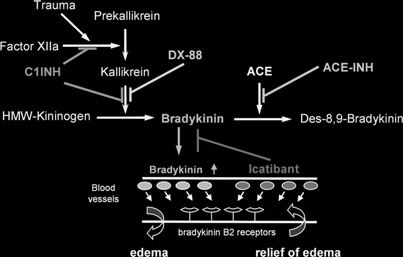