Behavior
- Any response or activity of an organism. It can either be simple or complex; overt
or cover t; conscious or unconscious; voluntary or involuntary; rational or
irrational.

Goals of Psychology:
1) To Describe 2) To Explain 3) To Predict 4) To Control They use scientific methods to find answers that are far more valid and legitimate than those resulting from intuition and speculation.
Important People in the Development of Psychology:
Aristotle (384 –322 BC)
- He made assumptions out of observation regarding human behavior. He believed
that all beings, humans included, have souls, which animate them. Humans,
however, compared to other animal, have rational souls. Thus, humans are not
only, physical, but also rational. He also theorized about learning, memory,
motivation, emotion, perception and personality.

Rene Descartes (1596 – 1650)
- Supported the view that humans enter the world with an inborn store of
knowledge. He argued that some ideas (such as God, the self, perfection and
infinity) are innate. He is also notable for his conception of the body as a machine
that can be studied.

John Locke (1632–1704)
- Believed that at birth the human mind is a "tabula rasa" or a blank slate, on which
experience "writes" knowledge.

Charles Darwin (1809 – 1882)
- He is the author of the Law of Natural Selection or Theory of Evolution; inspired
the Psychological school of thought, Functionalism.

Francis Galton (1822–1911)
- He was concerned with the study of individual differences. He was considered as
the "Father of Mental tests"

Wilhelm Wundt
- Considered as the "Father of Modern Psychology." He established the first
experimental laboratory for the study of Psychology, in Leipzig, Germany, 1879.
He created a machine that measured the time lag between people's hearing a ball
hit the platform and their pressing a telegraph key. Wundt has seeking to measure
the "atoms of the mind" – the fastest and simplest mental processes.

Stanley Hall
- A student of Wundt's who established what many consider as the first American
psychology laboratory at Johns Hopkins University in 1883.

Hermann Ebbinghaus
- A German who reported on the first experiments on memory, 1885.
Schools of Thought:
1. Structuralism (Edward Titchener)
- Study of the parts of conscious experiences through introspection. Conscious
experiences are composed of sensations, feelings, and images. Introspection is a
process of studying the self, or self- examination. Introduced by St. Thomas of
Aquinas.

2. Functionalism (William James)
- Defines behavior or the mental phenomena in terms of their functions in man's
adjustment to his environment. It is very much influenced by Darwin's Theory of
Evolution.
3. Gestalt Psychology (Max Wertheimer, Wolfgang Kohler, Kurt Koffka)
- Believed that the human mind imposes meaning to related experiences. It
advocates that the study of human behavior should be holistic. "The whole is
greater than the sum of its parts."
4. Behaviorism (John B. Watson)
- Emphasized the need to study what is observable. Its objective was to predict and
control behavior. S-R Psychology.

5. Psychoanalysis (Sigmund Freud)
- Much of our behavior is governed by unconscious motive and primitive
biological instincts. It considered all humans basically would like to gain pleasure
and avoid pain.
Contemporary Approaches:
Ø Neuroscience -
Views behavior from the perspective of biological functioning Ø Psychodynamic -
Believes behavior is motivated by inner, unconscious force over which a person has little control Ø Behavioral -
Focuses on observable behavior Ø Cognitive -
Examines how people understand and think about the world Ø Humanistic –
Contends that people can control their behavior and that they naturally try to reach their full potential The Scientific Method
The approach used by psychologists to systematically acquire knowledge and understanding about behavior and other phenomena of interest. 1. Identifying questions of interest, 2. Formulating an explanation, (Theories and Hypotheses) 3. Carrying out research designed to support or refute the explanation. Psychologists study the behaviour of both humans and animals, and the main purpose of this research is to help us understand people and to improve the quality of human lives. The results of psychological research are relevant to problems such as learning and memory, homelessness, psychological disorders, family instability, and aggressive behaviour and violence. Psychological research is used in a range of important areas, from public policy to driver safety. Basic research is research that answers fundamental questions about behaviour.
For instance, cognitive psychologists investigate how different types of studying
influence memory for pictures and words. There is no particular reason to examine
such things except to acquire a better knowledge of how these processes occur.
Applied research is research that investigates issues that have implications for
everyday life and provides solutions to everyday problems. Applied research has
been conducted to study, among many other things, the most effective methods for
reducing depression, the types of advertising campaigns that serve to reduce drug
and alcohol abuse.
Methods Used in Psychology:

1. Descriptive Research –
An approach to research designed to systematically investigate a person, group, or
patterns of behavior.
a. Naturalistic Observation - Research in which an investigator simply observes
some naturally occurring behavior and does not make a change in the situation
b. Directed Observation (Survey) - Research in which people chosen to represent
a larger population are asked a series of questions about their behavior, thoughts,
or attitudes.
c. Archival Research - Research in which existing data, such as census
documents, college records, and newspaper clippings, are examined to test a
hypothesis. d. Case Study - An in-depth, intensive investigation of an individual or
small group of people.

Advantages
1) Provides a relatively complete picture of what is occurring at a given time. 2) Allows the development of questions for further study.

Advantages:
1) Allows testing of expected relationships between and among variables and the making of predictions. 2) Can assess these relationships in everyday life events.
Disadvantages
- Cannot be used to draw inferences about the causal relationships between and
among the variables
3. Experimental Method
Considered as the most scientific of all methods. The researcher investigate a
phenomenon by preparing 2 identical groups and altering the conditions of one of
the groups; afterwards, measuring the difference.
Independent Variable.
Dependent Variable.
Advantages:
- Allows drawing of conclusions about the causal relationships among variables.
Disadvantages
1) Cannot experimentally manipulate many important variables. 2) May be expensive and time consuming.
Fields in Psychology
1. Developmental Psychology – The study of human development and the factors
that shape behavior from birth to old age.

2. Social Psychology – The study of how people think about, influence, relate with
one another, and the ways interaction with other people influence attitudes and
behavior.

4. Clinical Psychology – The study of the diagnosis and treatment of emotional
and behavioral problems (mental illness, drug addiction, marital and family
conflict).

6. School and Educational Psychology – The study that deals with the evaluation
of learning and emotional problems of individual in school.

9. Behavioral Neuroscience – The study that employs the biological perspective,
seeking to discover the relationships between biological processes and behavior.

10. Experimental Psychology – The study that employs the behavioral and
cognitive perspective as well as the experimental method in studying how people
react to sensory stimuli, perceive the world, learn and remember, and respond.

13. Health Psychology – The study of the cognitive, affective, behavioral, and
interpersonal factors affecting health and illness.

14. Cross-Cultural Psychology - investigates the similarities and differences in
psychological functioning in and across various cultures and ethnic groups.

16. Cognitive psychology - focuses on the study of higher mental processes

17. Evolutionary psychology - considers how behavior is influenced by our
genetic inheritance from our ancestors.

18. Psychology of Women - focuses on issues such as discrimination against
women and the causes of violence against women.
Activity Identify which subfield of psychology is related to the issues or
questions posed below:
1. Joan, a college freshman, is worried about her grades. She needs to learn better
organizational skills and study habits to cope with the demands of college.
2. At what age do children generally begin to acquire an emotional attachment to
their fathers?
3. It is thought that pornographic films that depict violence against women may
prompt aggressive behavior in some men.
4. What chemicals are released in the human body as a result of a stressful event?
What are their effects on behavior?
5. Luis is unique in his manner of responding to crisis situations, with an even
temperament and a positive outlook
6. Jeanette's job is demanding and stressful. She wonders if her lifestyle is making
her more prone to certain illnesses, such as cancer and heart disease.
7. A psychologist is intrigued by the fact that some people are much more sensitive
to painful stimuli than others are.
8. A strong fear of crowds leads a young woman to seek treatment for her problem. 9. What mental strategies are involved in solving complex word problems? 10. Jessica is asked to develop a management strategy that will encourage safer work practices in an assembly plant 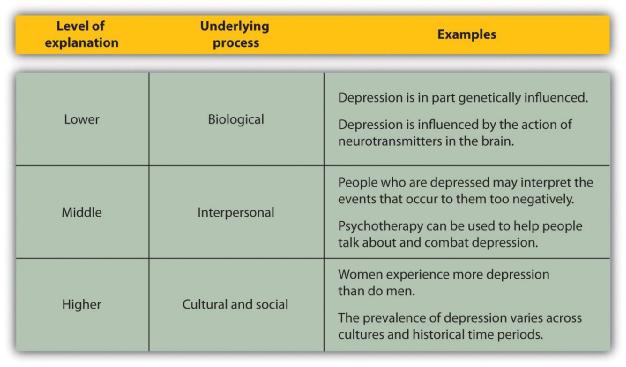 Levels of Explanation of understanding behaviour in Psychology:

- A major goal of psychology is to predict behavior by understanding its causes.
Making predictions is difficult in part because people vary and respond differently
in different situations. Individual differences are the variations among people on
physical or psychological dimensions. For instance, although many people
experience at least some symptoms of depression at some times in their lives, the
experience varies dramatically among people. Some people experience major
negative events, such as severe physical injuries or the loss of significant others,
without experiencing much depression, whereas other people experience severe
depression for no apparent reason. Other important individual differences include
differences in extraversion, intelligence, self-esteem, anxiety, aggression, and
conformity.
Because of the many individual difference variables that influence behavior, we
cannot always predict who will become aggressive or who will perform best in
graduate school or on the job. The predictions made by psychologists (and most
other scientists) are only probabilistic. We can say, for instance, that people who
score higher on an intelligence test will, on average, do better than people who
score lower on the same test, but we cannot make very accurate predictions about
exactly how any one person will perform.
Another reason that it is difficult to predict behavior is that almost all behavior is
multiply determined, or produced by many factors. And these factors occur at
different levels of explanation. We have seen, for instance, that depression is
caused by lower-level genetic factors, by medium-level personal factors, and by
higher-level social and cultural factors. You should always be skeptical about
people who attempt to explain important human behaviors, such as violence, child
abuse, poverty, anxiety, or depression, in terms of a single cause. Furthermore,
these multiple causes are not independent of one another; they are associated such
that when one cause is present other causes tend to be present as well. This overlap
makes it difficult to pinpoint which cause or causes are operating. For instance,
some people may be depressed because of biological imbalances in
neurotransmitters in their brain. The resulting depression may lead them to act
more negatively toward other people around them, which then leads those other
people to respond more negatively to them, which then increases their depression.
As a result, the biological determinants of depression become intertwined with the
social responses of other people, making it difficult to disentangle the effects of
each cause.