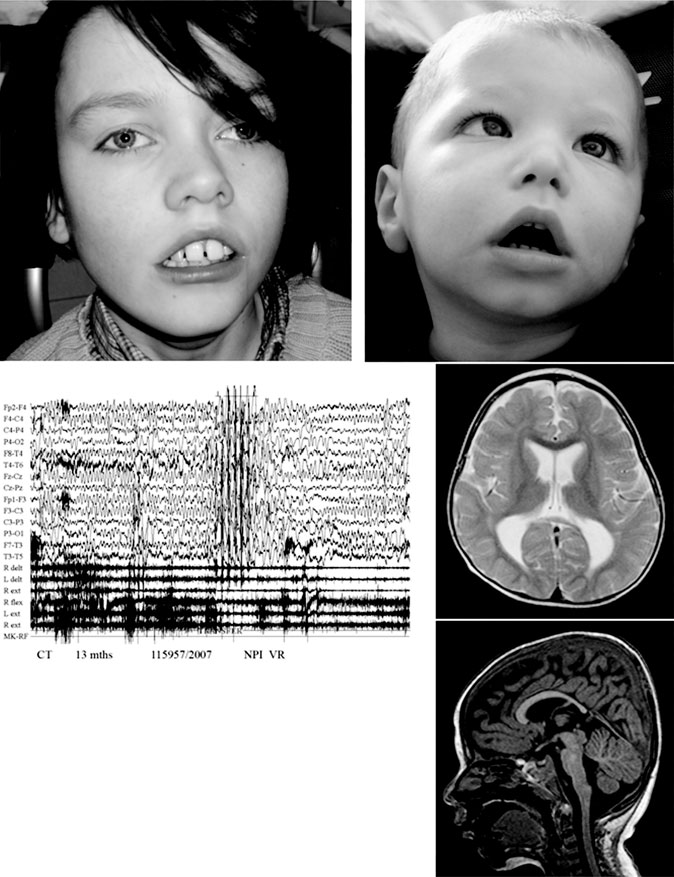 Deletion of MEF2C causes severe MR
Fig. 1. Clinical picture of patient 1 at the age of 14 years (a) and patient 2 at the age of 3 years (b). Note the facial hypotonia,
strabismus, prominent philtrum with cupid's bow in both boys. Patient 1 has in addition macrodontia. (c) EEG record of patient 2 at
the age of 13 months showing slow background activity with theta waves degraded over the central regions of the two hemispheres
and degraded diffuse discharges, together with rhythmic sharp wave activity; EEG velocity: 15 mm/s; amplitude: 50 μV. (d,e) MRI
images of patient 2: axial section showing dilatation of the lateral ventricles (d) and sagittal section showing hypoplasia of the
distal part of the corpus callosum (e).
prominent ear lobes, short prominent philtrum with His mother suffered from hypothyroidism and was a cupid's bow and macrodontia (Fig. 1a).
treated with levothyroxin during pregnancy. At Patient 2 was born at term with birth weight of 4 months of age, lack of reactivity was observed 3600 g and length of 51 cm (both 75th centile).
in addition to severe hypotonia, dystonic motor Novara et al.
activity, absent head control and poor visual track- (patient 2) mechanisms. (Table S1, Supporting ing. At the age of 5 months, psychomotor delay information). Parental origin was not investigated and myoclonus were observed. EEG showed slow in patient 1. In patient 2, the chromosomal imbal- background activity with theta waves degraded ance originated at the paternal meiosis. Three out over the central regions of the two hemispheres of four microsatellites analyzed in the deleted and degraded diffuse discharges, sometimes with region showed the presence of the maternal allele episodes of rhythmic sharp wave activity, asso- only (data not shown).
ciated with revulsion of eyes and myoclonus ofthe limbs (Fig. 1c). Clinical evaluation showed occipital plagiocephaly, hypertelorism, flattenednasal bridge, small and hooked nose, ogival Recently, MEF2C haploinsufficiency has been palate, and low-set and dysmorphic ears (Fig. 1b).
described in five patients presenting a severe and Marked myopia with alternating esotropia was also syndromic form of MR and carrying a submicro- observed. Several MRI scans of the brain were scopic deletion on chromosome 5q14.3 of variable performed at 5, 8 and 19 months of age, respec- size ranging from 216 kb to 8.8 Mb (1). Moreover, tively; they showed moderate dilatation of lateral the same authors detected a nonsense mutation ventricles and hypoplasia of the corpus callosum in MEF2C in an additional patient exhibiting a with abnormal aspect of the splenius (Fig. 1d,e).
similar phenotype and thus underscoring the clin- The development quotient was calculated using the ical relevance of this new autosomal dominant Griffith mental development scales at 13 and 19 MR gene. MEF2C encodes myocyte enhancer months of age (35 and 30, respectively). At the factor 2 that functions as a transcription factor, last evaluation at 3 years and 10 months of age, with MEF2C as the predominant isoform in the he presented a severe cognitive deficit with numer- brain. The role of MEF2C during brain develop- ous behavioral stereotypes. Head circumference ment and functioning, including neurogenesis, neu- was at the 50th centile. Neurological examination ronal migration and synaptic plasticity, has been showed severe axial hypotonia with partial control well established in murine models and in vitro of the head. In the lower limbs an increased mus- functional studies (4–7). Its role in learning and cular tonus was noticed with dystonic–dyskinetic memory as well as maintaining the critical bal- movements. He was able to fix and follow objects ance between inhibitory and excitatory synapses and wore glasses for myopia. Language was is consistent with the human haploinsufficiency absent. He still suffered from myoclonic and phenotype we and others have observed. Both myoclonic–atonic seizures with falling of the patients we describe here carry a very small dele- head, not responding to any anti-epileptic ther- tion, involving only the MEF2C in patient 1. The apy (Valproic Acid, Nitrazepam, Levetiracetam, deletion in patient 2 also affects the TMEM161B Hydrocortison, Clobazam, and Ethosuximide).
gene, a gene of unknown function that is predictedto encode a transmembrane protein. We can notexclude an involvement of haploinsufficiency of this gene in the clinical phenotype of patient 2.
In the absence of an etiological diagnosis in both When we compare the clinical phenotype in patients, array CGH analysis using the 105 K our patients with the reported patients, the pheno- array (Agilent) was performed. In both patients, type remains very consistent (Table 1). All patients a small deletion in 5q14.3 was detected (Fig. 2).
present with severe primary developmental delay All breakpoint locations were refined by qPCR, reflected by early hypotonia, delayed motor devel- and then both junctions were amplified by long- opment and no speech development. Thus far, our range PCR and sequenced. Patient 1 has a deletion patients and previously reported patients who are of 318357 bp (87,978,527–88,296,884) harboring hemizygous for the gene did not reach indepen- only MEF2C, while patient 2 has a slightly larger dent walking and remain very hypotonic, while deletion of 1140131 bp (87,234,127–88,374,258).
the patient with a reported point mutation started Besides MEF2C, the latter deletion also includes to walk at 3 years of age without hypotonia (1) the TMEM161B gene. The mother of patient 1 (Table 1). This might point toward a more severe does not carry the deletion, while his father could effect of the deletion compared to the intragenic not be tested. In patient 2 the deletion occurred mutation, but more cases are needed to make de novo. Breakpoint junctions are outside low any genotype–phenotype correlation. Stereotypic copy repeats and have no particular identity.
movements and poor eye contact are present in They are consistent with microhomology-mediated many patients, suggesting the diagnosis of autism (patient 1) or non-homologous end-joining (NHEJ) spectrum disorder (ASD). Interestingly, a role for 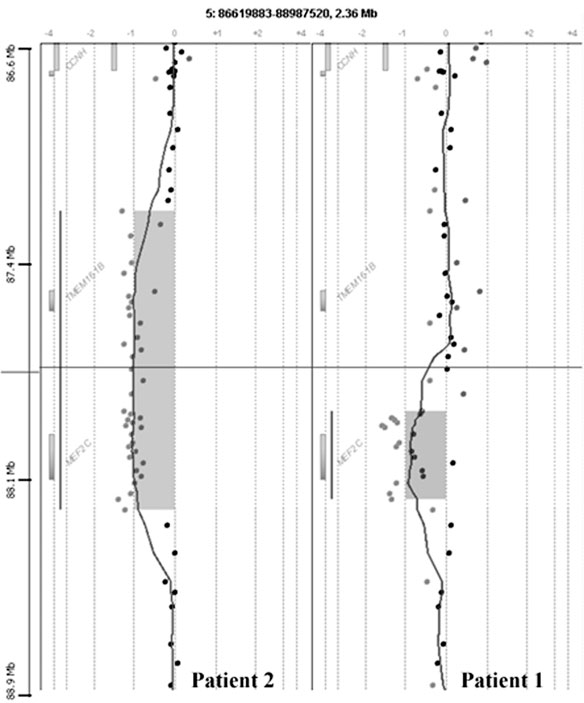 Deletion of MEF2C causes severe MR
Fig. 2. Detailed view of the chromosome 5q14.3 aCGH profile showing the deletion in patient 1 (right) and patient 2 (left).
MEF2C in ASD was already shown in classical is very distinct in severity, we believe that another and conditional knock-out mouse models (4, 8).
genetic trait is reponsible for their epilepsia.
Moreover, Morrow et al. identified many MEF2 In most patients brain imaging is reported to target genes in their screen for autism genes by be abnormal, including anomalies of the cor- means of homozygosity mapping in pedigrees with pus callosum, enlarged ventricles, periventricular shared ancestry (9). The recent findings in humans white matter hyperintensities and cortical atrophy further reinforce the role of MEF2C during neu- (Table 1). None of these anomalies seems to be rogenesis and synaptogenesis. Epilepsy is another specific and some might be secondary to the severe frequent feature of MEF2C haploinsufficiency, epileptic activity. Interestingly, Cardoso et al.
although the type (myoclonic, tonic-clonic, infan- reported periventricular heterotopia in a patient tile spasms and febrile seizures) and age at onset with a larger deletion including MEF2C (2). For may vary considerably. In both patients the severe the moment it is unclear whether MEF2C haploin- drug-resistant infantile spasms even necessitated sufficiency is responsible for this variable spectrum admission at an epilepsy care center. Patient 1 has of features or whether other genes within larger two male relatives with a benign form of epilepsy, deletions exert an additional effect. The same holds not affecting cognition or daily functioning. As the true for the facial dysmorphisms that seem to deletion is de novo, and the phenotype in patient 1 be more pronounced in the patients with larger Novara et al.
Deletion of MEF2C causes severe MR
deletions (1). We did not observe any effect of MEF2C hemizygosity on growth and head circum- 1. Le Meur N, Holder-Espinasse M, Jaillard S et al. MEF2C hap- ference (Table 1).
loinsufficiency caused either by microdeletion of the 5q14.3 In summary, we present two new patients with region or mutation is responsible for severe mental retardation severe MR, epilepsy and ASD associated with with stereotypic movements, epilepsy and/or cerebral malfor- deletion of MEF2C.
mations. J Med Genet 2009: 47: 22 – 29.
2. Cardoso C, Boys A, Parrini E et al. Periventricular heterotopia, mental retardation, and epilepsy associated with 5q14.3 – q15deletion. Neurology 2009: 72: 784 – 792.
3. Engels H, Wohlleber E, Zink A et al. A novel microdeletion The following Supporting information is available for this article: syndrome involving 5q14.3 – q15: clinical and molecular cyto- Table S1. Cloning of the deletion breakpoints in patients 1 and 2.
genetic characterization of three patients. Eur J Human Genetics2009: 17: 1592 – 1599.
Additional Supporting information may be found in the online 4. Li H, Radford JC, Ragusa MJ et al. Transcription factor version of this article.
MEF2C influences neural stem/progenitor cell differentiation Please note: Wiley-Blackwell Publishing is not responsible for the and maturation in vivo. Proc Natl Acad Sci U S A 2008: 105: content or functionality of any supplementary materials supplied 9397 – 9402.
by the authors. Any queries (other than missing material) should 5. Barbosa AC, Kim MS, Ertunc M et al. MEF2C, a transcription be directed to the corresponding author for the article.
factor that facilitates learning and memory by negative regu-lation of synapse numbers and function. Proc Natl Acad SciU S A 2008: 105: 9391 – 9396.
6. Flavell SW, Cowan CW, Kim TK et al. Activity-dependent regulation of MEF2 transcription factors suppresses excitatory We thank the families for their cooperation. H.V.E. is funded by synapse number. Science 2006: 311: 1008 – 1012.
the F.W.O. Vlaanderen. O.Z. is funded by Cassa di Risparmio 7. Shalizi A, Gaudilliere B, Yuan Z et al. A calcium-regulated delle Provincie Lombarde (CARIPLO: 2007.5197, bando 2007) and MEF2 sumoylation switch controls postsynaptic differentiation.
by Ministry of Health Grant (RF-AOM-2007-636538. ‘Genomic Science 2006: 311: 1012 – 1017.
structural variation studies in mentally retarded and normal 8. Lipton SA, Li H, Zaremba JD et al. Autistic phenotype from individuals in Italy').
MEF2C knockout cells. Science 2009: 323: 208.
9. Morrow EM, Yoo SY, Flavell SW et al. Identifying autism loci and genes by tracing recent shared ancestry. Science 2008: 321: Conflict of interest
218 – 223.
The authors do not have any affiliation with anygroup with a direct financial interest in the subjectmatter or materials discussed in the manuscript.
Copyright of Clinical Genetics is the property of Wiley-Blackwell and its content may not be copied or emailed to multiple sites or posted to a listserv without the copyright holder's express written permission. However, users may print, download, or email articles for individual use.