Contents lists available at Progress in Neuro-Psychopharmacology & Biological An update on amine oxidase inhibitors: Multifaceted drugs Mee-Sook Song Dmitriy Matveychuk , Erin M. MacKenzie , Maryana Duchcherer Darrell D. Mousseau Glen B. Baker a Neurochemical Research Unit, Department of Psychiatry, University of Alberta, Edmonton, AB, Canadab Cell Signalling Laboratory, Department of Psychiatry, University of Saskatchewan, Saskatoon, Saskatchewan, Canada Although not used as extensively as other antidepressants for the treatment of depression, the monoamine Received 8 September 2012 oxidase (MAO) inhibitors continue to hold a niche in psychiatry and to have a relatively broad spectrum Received in revised form 31 January 2013 with regard to treatment of psychiatric and neurological disorders. Experimental and clinical research on Accepted 3 February 2013 MAO inhibitors has been expanding in the past few years, primarily because of exciting ﬁndings indicating Available online 11 February 2013 that these drugs have neuroprotective properties (often independently of their ability to inhibit MAO). Thenon-selective and irreversible MAO inhibitors tranylcypromine (TCP) and phenelzine (PLZ) have demonstrated neuroprotective properties in numerous studies targeting elements of apoptotic cascades and neurogenesis.
Monoamine oxidase l-Deprenyl and rasagiline, both selective MAO-B inhibitors, are used in the management of Parkinson's disease, but these drugs may be useful in the treatment of other neurodegenerative disorders given that they demon- Primary amine oxidase strate neuroprotective/neurorescue properties in a wide variety of models in vitro and in vivo. Although the focus of studies on the involvement of MAO inhibitors in neuroprotection has been on MAO-B inhibitors, there is a growing body of evidence demonstrating that MAO-A inhibitors may also have neuroprotective properties.
In addition to MAO inhibition, PLZ also inhibits primary amine oxidase (PrAO), an enzyme implicated in theetiology of Alzheimer's disease, diabetes and cardiovascular disease. These multifaceted aspects of amine oxidaseinhibitors and some of their metabolites are reviewed herein.
2013 Elsevier Inc. All rights reserved.
Non-selective inhibitors of MAO: phenelzine and tranylcypromine MAO-B inhibitors: l-deprenyl and rasagiline . . . . . . . . . . . . . . . . . . . . . . . .
Primary amine oxidase and its inhibition Metabolism of amine oxidase inhibitors and its relevance Future applications and drug development Abbreviations: MAO, monoamine oxidase; PrAO, primary amine oxidase; SSAO, semicarbazide-sensitive amine oxidase; TCP, tranylcypromine; PLZ, phenelzine; PEH, Monoamine oxidase (MAO) inhibitors are not prescribed as widely β-phenylethylidenehydrazine; BDNF, brain-derived neurotrophic factor; EAE, experi-mental autoimmune encephalomyelitis; GABA, γ-aminobutyric acid; GABA-T, GABA as other antidepressants ), but they continue to transaminase; AD, Alzheimer's disease.
hold an important niche in the treatment of psychiatric and neurolog- ⁎ Corresponding author at: Neurochemical Research Unit, Department of Psychiatry, University of Alberta, Edmonton, AB, Canada T6G 2R7. Tel.: +1 780 492 5994; fax: +1 780 492 6841.
E-mail address: (G.B. Baker).
in these drugs has increased signiﬁcantly in recent years following 0278-5846/$ – see front matter 2013 Elsevier Inc. All rights reserved. 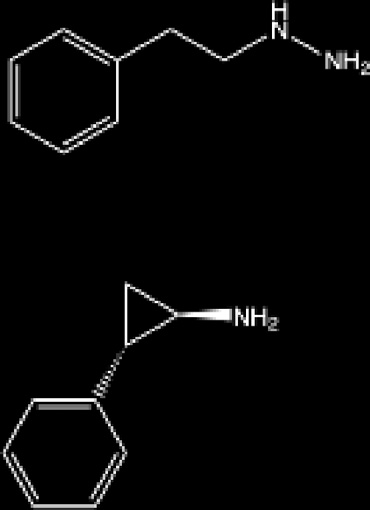 M.-S. Song et al. / Progress in Neuro-Psychopharmacology & Biological Psychiatry 44 (2013) 118–124 numerous reports of their neuroprotective/neurorescue properties are formed from amines, from lipid peroxidation, in glycolytic path- ways and through the metabolism of some amino acids. Such aldehydes, which include 3-aminopropanal, acrolein, 4-hydroxy-2-nonenal, form- exciting ﬁndings with primary amine oxidase [PrAO, previously called aldehyde and aldehyde metabolites of catecholamines, are very reactive semicarbazide-sensitive amine oxidase (SSAO)] and its inhibitors have and can covalently modify proteins, nucleic acids, lipids and carbohy- stimulated research on amine oxidase inhibitors and increased our drates and activate apoptotic pathways knowledge of the etiology of several neuropsychiatric disorders and associated diabetes and cardiovascular disease ( ). Because of its In this review, we will provide an update on neuroprotection hydrazine structure, PLZ is very effective at sequestering aldehydes by amine oxidase inhibitors, on the importance of metabolism of these through a direct chemical reaction ( drugs and on possible future drug applications in this area.
resulting in the formation of an inert hydrazone molecule andreduced concentrations of toxic aldehydes. Reactive aldehydes have 2. Non-selective inhibitors of MAO: phenelzine been implicated in the pathophysiology of a number of conditions in- and tranylcypromine cluding Alzheimer's disease (AD) and various cardiovascular diseases Phenelzine (2-phenylethylhydrazine, PLZ) ) is an irreversible, Interestingly, the reactive aldehyde non-selective MAO inhibitor (i.e. inhibits both MAO-A and MAO-B) that acrolein has recently been suggested to be a potential factor in oxida- has been used for many years as an antidepressant drug and is also tive stress and myelin loss in multiple sclerosis (), effective in treating panic disorder, social anxiety disorder, and post- and was shown to induce marked myelin damage to isolated spinal traumatic stress disorder (PTSD) cords in vitro () and to be involved in spinal cord injury . Although it is an MAO inhibitor, it also pro- in vivo Furthermore, acrolein-protein adduct duces marked increases in brain levels of γ-aminobutyric acid (GABA) levels were signiﬁcantly increased in experimental autoimmune en- by inhibiting GABA transaminase (GABA-T) ( cephalomyelitis (EAE), an animal model of multiple sclerosis, and se- ). PLZ has been reported to be neuroprotective in questration of acrolein with hydralazine improved behavioral outcomes a transient cerebral ischemia model in gerbils ) and and reduced demyelination in the spinal cord in that model in the N-(2-chloroethyl)-N-ethyl-2-bromobenzylamine (DSP)-4-induced ). PLZ has also been shown to improve behavioral outcomes in noradrenaline depletion rodent model ). Several other EAE mice ), possibly due to its multiple actions, GABAergic agents have been reported to be neuroprotective in animal including its ability to increase levels of serotonin, noradrenaline and models of ischemia (presumably due at GABA in the ventral horn of the spinal cord and some brain regions of least in part to their ability to counteract the excitotoxic effects of in- EAE mice ) and its ability to sequester acrolein creased extracellular glutamate in such models ().
). In addition, acetaldehyde, produced from the me- PLZ has also been reported to decrease K+-induced glutamate overﬂow tabolism of ethanol, is thought to play an important role in the develop- in the prefrontal cortex in rats (to alter glu- ment of alcoholic liver disease (and alcohol-related tamate–glutamine cycling ﬂux between neurons and glia ( cancers ); thus, sequestra- to affect the GLUT-1 glutamate transporter in astrocytes tion of acetaldehyde may be beneﬁcial in protecting chronic alcoholics and neurons, and to reverse the decreased astrocytic glutamate uptake from development or exacerbation of these alcohol-related diseases.
and the alteration of the signaling kinases AKT and p38 induced by Despite its vast therapeutic potential, PLZ, like other hydrazine- formaldehyde Chronic (21 day) treatment of rats containing drugs, is not without adverse effects; PLZ may produce with PLZ has been reported to increase brain-derived neurotrophic pyridoxal phosphate depletion [though not factor (BDNF) protein expression in the frontal cortex ) all studies have supported this idea (in which and in the whole brain ().
case ongoing vitamin supplementation could be warranted ( In addition to these pharmacological effects, the potent ability of Furthermore, overdoses of PLZ could potentially induce hepa- PLZ, a hydrazine, to sequester reactive aldehydes may contribute to totoxic and neurotoxic effects, including seizures in isolated cases its neuroprotective actions ). Reactive aldehydes However, this drug hasbeen available commercially for over ﬁfty years and continues to beused clinically.
Tranylcypromine (TCP) (an irreversible, non-selective MAO inhibitor, has not been investigated as extensively as some of the otherMAO inhibitors with regard to neuroprotection. Yet several reports linkTCP treatment with an increase in the expression of messenger ribo-nucleic acid (mRNA) for BDNF ( and cyclic adenosine monophosphate (cAMP) re-sponse element binding protein (CREB) ) in the rat brain hippocampus—effects that could lead toneurogenesis (It has also been reported thatTCP increases expression of the antiapoptotic factors B-cell leukemia/lymphoma 2 (Bcl-2) and B-cell lymphoma extra large (Bcl-XL) in sev-eral brain areas ).
3. MAO-B inhibitors: l-deprenyl and rasagiline ), a selective irreversible MAO-B inhibitor, was originally devel-oped in the hope that it would be an effective antidepressant withoutthe pressor effect ( Fig. 1. Structures of the non-selective, irreversible MAO inhibitors phenelzine (PLZ) "cheese effect") which can occur in patients that and tranylcypromine (TCP).
ingest tyramine-rich foods while taking irreversible MAO-A inhibitors. 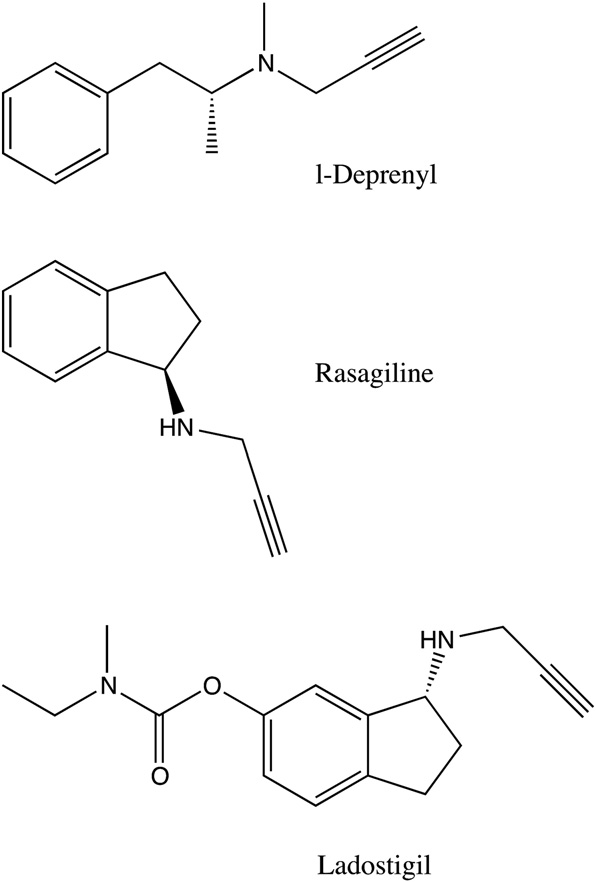 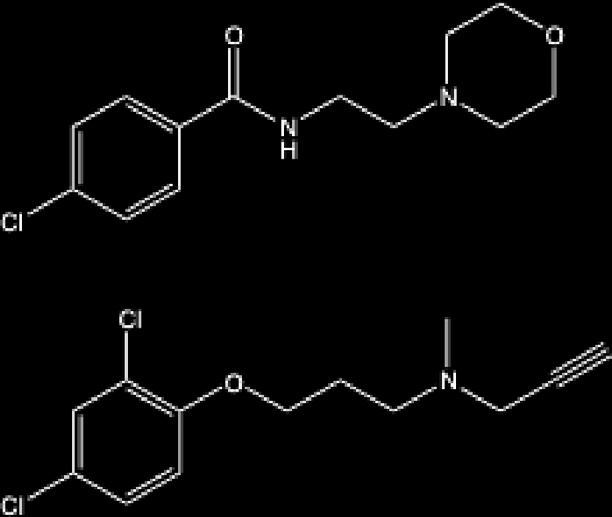 M.-S. Song et al. / Progress in Neuro-Psychopharmacology & Biological Psychiatry 44 (2013) 118–124 The mechanisms of neuroprotective action of these N-propargyl drugs appear to be complex (). Recent evidence demonstrates that l-deprenyl,rasagiline and R-(−)-aminoindan exert concentration-dependentneuroprotective effects in vitro by modulating glutamatergic receptoractivity in the rat hippocampus ().
indicated that l-deprenyl and rasagiline interactwith the outer mitochondrial membrane, preventing neurotoxin-induced collapse of mitochondrial membrane potential and permeabil-ity transition, and the opening of the voltage-dependent anion channel;these effects are thought to reﬂect the upregulation of antiapoptoticBcl-2 protein and the downregulation of proapoptotic proteins suchas Bcl-associated death promoter (BAD) and Bcl-associated protein X(BAX), as well as via a mechanism dependent on the inactivation andnuclear localization of glyceraldehyde-3-phosphate dehydrogenase(GAPDH), an initiator of apoptotic cascades ().
Interestingly, a recent report suggests that the increase in Bcl-2 mRNAin vitro induced by rasagiline is mediated by MAO-A, whereas theupregulation of Bcl-2 mRNA by l-deprenyl is not ). l-Deprenyl has also been reported to increase levels ofBDNF protein in some brain areas ), and to haveanti-amyloidogenic activity in vitro ). Furthermore,l-deprenyl was shown to reverse both scopolamine-induced decreasesin antioxidants and increases in malondialdehyde (an important bio-logical marker for in vivo lipid peroxidation) in a mouse model of AD,providing additional support for the possible utility of this drug in AD(Indeed, increased MAO activity and expres-sion of MAO mRNA have been reported in AD ),suggesting that MAO inhibitors should be investigated more exten-sively as possible adjunctive drugs in this disorder. Ladostigil ( Fig. 2. Structures of the MAO-B inhibitors l-deprenyl, rasagiline and ladostigil.
combines the activities described above for rasagiline with an addi-tional anticholinesterase component and is a promising drug for AD( It turned out to be a poor antidepressant drug, except at higher doses when its selectivity was lost and it also inhibited MAO-A [althoughrecent reports indicate that transdermal administration allows doses 4. MAO-A and its inhibitors of l-deprenyl to be used that are sufﬁcient to inhibit brain MAO-Aand produce an antidepressant effect without substantially inhibiting Much of the work on neuroprotection provided by MAO inhibitors MAO-A in the gut )]. l-Deprenyl is used has focused on selective MAO-B inhibitors such as L-deprenyl and in Parkinson's disease (and rasagiline, but selective MAO-A inhibitors may also exert protective has more recently been reported to be of some use in global ischemia, effects (Moclobemide (), a reversible MAO-A Gilles de la Tourette syndrome, narcolepsy and AD inhibitor, has been reported to have anti-Parkinson activity and neuro- although clinically meaningful beneﬁt in AD continues to be a matter protective effects in a model of cerebral ischemia, but these effects ap- of debate ). l-Deprenyl is remarkable in that pear to be independent of MAO-A inhibition ).
it has been demonstrated to have neuroprotective or neurorescueproperties in a wide variety of neurotoxicity tests in vivo and in vitro(It has also been suggested that l-deprenyl has the potentialto be utilized as a radiolabeled biomarker for the early detection ofAD and other degenerative diseases that exhibit increased MAO-B ex-pression A result of research on l-deprenyl has been the development of rasagiline (), a structurally related drug (also containing anN-propargyl group), which has now been approved for use in Parkinson'sdisease in several countries ). Rasagiline has an advantage over l-deprenylin that it is not metabolized to the potentially neurotoxic productsl-amphetamine and l-methamphetamine; in fact, its active metabo-lite, R-(−)-aminoindan, shows neuroprotective properties that areindependent of MAO-B inhibition ).
The neuroprotective effects of l-deprenyl are apparently lost athigh concentrations ), pos- sibly due to the formation of high levels of l-amphetamine andl-methamphetamine.
Fig. 3. Structures of the MAO-A inhibitors moclobemide and clorgyline.

REGULATIONS AND SYLLABUS BACHELOR OF PHARMACY (B.PHARM) COURSE JSS UNIVERSITY SRI SHIVARATHREESHWARA NAGAR MYSORE – 570 015 JSS University Sri Shivarathreeshwara Nagar Mysore – 570 015 Bachelor of Pharmacy (B.Pharm) course REGULATIONS These regulations shall be called as "The Regulations for the B. Pharmacy Degree course of the J.S.S. University, Mysore". They shall come into force from the Academic Year 2012 - 2013. The regulations framed are subject to modifications from time to time by the authorities of the university Minimum qualification for admission to the course

Drinks: Good Hosts The very name sends pleasurable sensations down one's throat! These drinks are everywhere, in myriad avatars - sending celebrities into swoons or into undertaking death defying feats!Sparkling and twinkling, creating a fizzy haze, making consumers down vast quantities of junk food, helped by the pleasurable gulps. We tested 16 brands - a merry mix of colas and orange drinks, the sparkling variety and