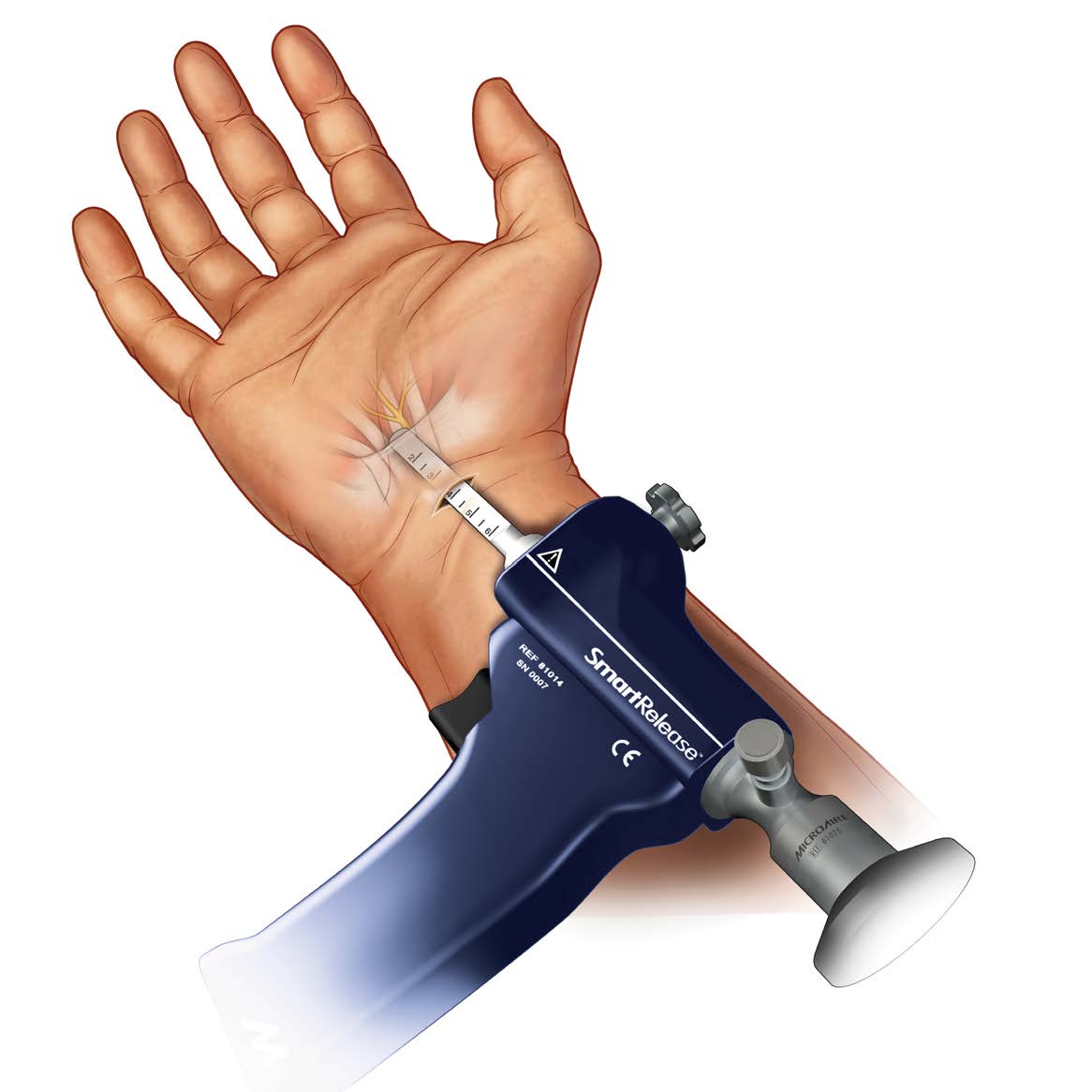 Endoscopic Carpal Tunnel Release
Surgical Technique
Table of Contents
Indications and Contraindications
• Indications: The MicroAire Carpal Tunnel Release System is for
Indications / Contraindications . i
use in patients diagnosed with carpal tunnel syndrome that is not associated with, or secondary to, any other known pathology Warnings / Definitions . i
(i.e., "idiopathic" carpal tunnel syndrome). Preoperative x-rays of the wrist, including a carpal tunnel view, are recommended to aid in the diagnosis of associated pathology (i.e., calcific tendonitis, fracture of the hook of the hamate). This device is indicated solely for releasing the transverse carpal ligament (flexor retinaculum).
• Contraindications: The MicroAire Endoscopic Carpal Tunnel
Release System is not intended for use in patients with known Troubleshooting Guide for Fogging .3
abnormalities of their wrist (carpal tunnel), including distal radial deformities, rheumatoid and other synovitis.
Surgical Setup .4-5
Anesthesia .5
* The MicroAire Carpal Tunnel Release System uses a dry procedure. No fluid or gas should be introduced into the carpal tunnel during this procedure.
Operative Technique . 6-13
• The surgeon is specifically advised not to use the instrument to Making the incision and creating a flap .6 explore and/or treat any structure other than the transverse carpal ligament within, or outside of, the carpal tunnel. Failure to heed this warning can lead to damage to the median or ulnar nerve, Elevating the U-shaped flap .7 flexor tendons or superficial palmar arterial arch.
• If the surgeon is unable to clearly visualize an ulnar "strip" of the transverse carpal ligament with a definite distal margin (which is Preparing a path .7 typically characterized by a transition from ligament to fat), the blade assembly should be withdrawn and the procedure should be converted to another carpal tunnel release procedure.
Introducing the blade assembly .8 • If the surgeon has any questions or concerns regarding patient anatomy, the surgical approach or instrument function—or if the view is less than adequate—the instrument should be withdrawn Defining the distal end of the ligament .9 and the procedure converted to another carpal tunnel release Step 6 Incising the transverse carpal ligament. 9-11 • Failure to follow the proper training and surgical technique can result in permanent injury to the patient. Endoscopic release of the carpal tunnel using the MicroAire® SmartRelease® ECTR should not be attempted until the surgeon has been trained at a Inspecting the incised ligament . 12 MicroAire-sponsored workshop. This training requires thorough familiarity with this Surgical Technique, the Instructions for Use and gaining hands-on experience with a trained surgeon who is Releasing the forearm fascia. 13 experienced with the device. The procedure should be performed on cadaveric specimens before initial use. Operating room staff should thoroughly review the MicroAire® SmartRelease® ECTR® Instructions for Use (REF: IM-SMARTRELEASE) prior to set up Closing and dressing the wound and wrist . 13 References . 13
Definitions
• NOTE: Indicates the easiest means of carrying out techniques.
• CAUTION: Indicates special procedures or precautions that must
MicroAire Surgical Instruments. be followed to avoid damaging the system instrumentation.
This document is protected from any form of unauthorized reproduction, duplication • WARNING: Indicates that the safety of the patient and hospital
or distribution.
personnel could be involved.
SURGICAL TECHNIQUE 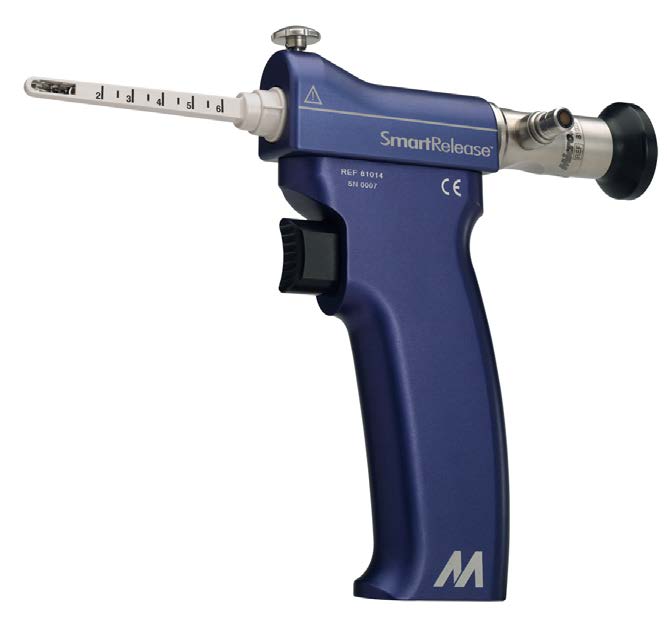 Traditionally, a patient treated surgically for carpal tunnel syndrome could expect significant recovery time away from work due to the surgical wound in the palm and heel of the hand. When the carpal tunnel is released endoscopically with the MicroAire® SmartRelease® ECTR, clinical results indicate that postoperative morbidity is improved and time away from normal activities and full employment are reduced by as much as 46 percent.1 The safety of this device has also been documented in a large clinical study involving over 1,000 cases in a multi- center study.2 The results of this study showed minimal complications.
Comprised of an endoscope and a handpiece that holds an elongated, disposable blade assembly, the MicroAire® SmartRelease® ECTR connects to any standard video camera and light source. The surgeon introduces the blade assembly into the carpal tunnel through a limited incision in the wrist flexor crease.* Viewing the deep side of the transverse carpal ligament (flexor retinaculum) through a window at the tip of the instrument, the surgeon elevates the blade to cut the ligament as the instrument is withdrawn.
This Surgical Technique is provided as an educational tool and clinical aid to assist medical professionals in the proper protocol for the MicroAire® SmartRelease® ECTR endoscopic carpal tunnel release instrumentation. For safe and effective use, surgeons must possess a thorough knowledge and understanding of wrist anatomy and the endoscopic technique using the MicroAire® SmartRelease® ECTR System. Instructional videotapes and cadaver workshops are available through MicroAire Surgical Instruments. Those considering using the MicroAire® SmartRelease® ECTR System should only do so after successfully completing MicroAire's required surgical training as well as the relevant training mandated in the professional guidelines of any pertinent hospital, institution or society. For training dates and locations, visit www.microaire.com Failure to follow the Surgical Technique may result in permanent injury to the patient. If, while performing this technique, any problems should arise, such as anatomical anomalies, inadequate visualization, inability to identify anatomy or questions concerning technique or instrumentation, the surgeon should abandon the endoscopic carpal tunnel release and convert to another carpal tunnel release procedure. These pages are not intended to provide medical advice or physician instruction on the appropriate use of products produced or supplied by MicroAire Surgical Instruments, its affiliates, related companies, or its licensors or other partners. * The MicroAire® SmartRelease® ECTR uses a dry procedure. No fluid or gas should be introduced into the carpal tunnel during this procedure.
MICROAIRE SMARTRELEASE® ECTR 1 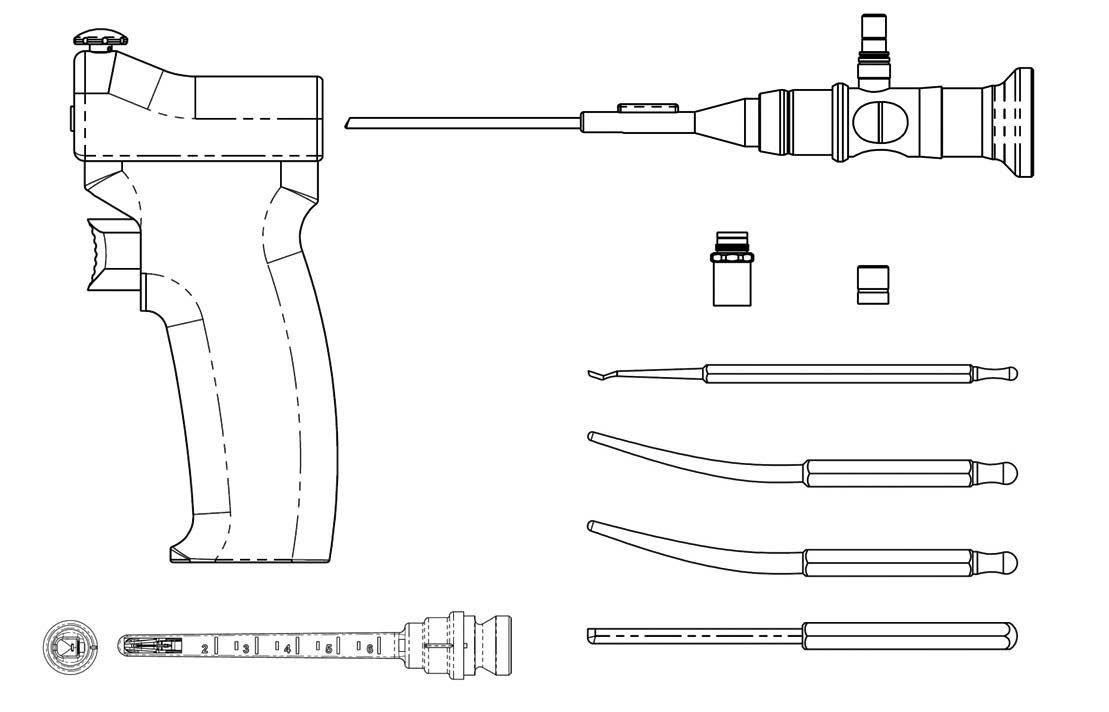 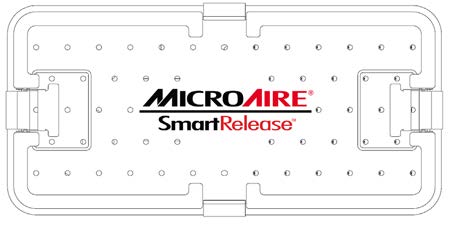 TROUBLESHOOTING GUIDE FOR FOGGING
In order to quickly identify the source of the fogging problem and formulate the appropriate solution, you should: 1. Assemble the system before the surgeon makes the skin incision to start the procedure.
2. Turn on the camera, light source and monitor. White balance using a white sponge and then lay a blue or green towel on the window using the fabric of the towel to set the light intensity and to focus on the mid and distant portion of the window. 3. Observe for any sign of fogging.
Fogging appeared Moisture inside camera Disassemble and dry 1. EtO or stream sterilize before inserting endoscope and camera instead of soaking.
in to carpal tunnel lenses with alcohol or 2. Using anti-fogging agents to dry before assembling.
3. Soak scope with camera attached.
4. Keep system warm by turning on light source.
Water trapped between Use a sterile cotton swab to Thoroughly dry the plastic eyepiece and soak up water around the gap scope-camera coupler between the scope lens and interface with a cotton plastic eyepiece.
swab after soaking.
Fogging after inserting Condensation due to 1. Leave inside tunnel until 1. Connect to light source into the carpal tunnel temperature difference scope warms to body temp.
to pre-warm.
between the scope and 2. Dip scope tip in to warm 2. Rinse scope with warm patient's tissue.
saline and wipe dry.
saline after soaking.
Excess fluid inside the Soak up excess fluid with Avoide injecting anesthetics sterile cotton swab.
in to the carpal tunnel.
Fuzzy or leave persisting Always protect the scope MicroAire Service when not in use.
Beware of contamination caused by disassembling the camera and the scope in the same sterile field if they have been attached together during soaking.
For additional information, consult the MicroAire Instructions for Use (REF: IM-SMARTRELEASE) MICROAIRE SMARTRELEASE® ECTR 3 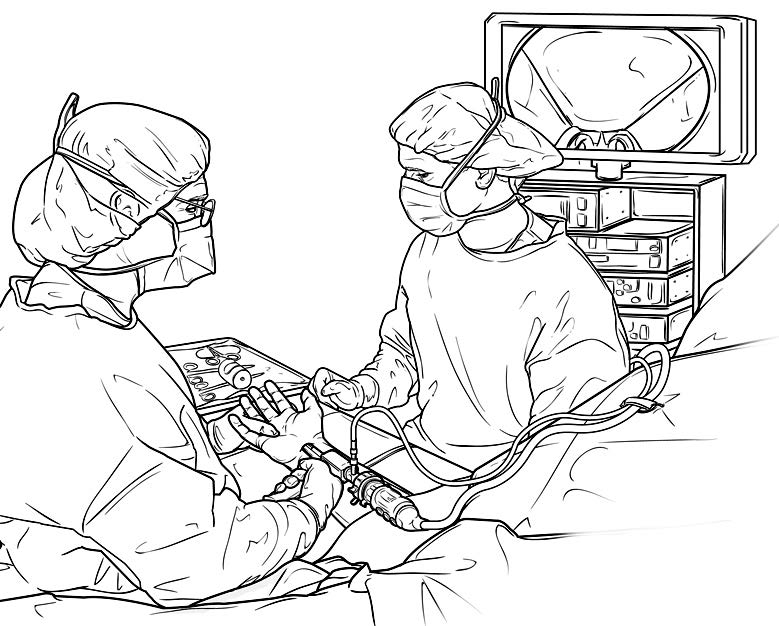 The Ties That Bound a County Railway Heritage Tour of Perth County Railway rivalry, expansions and an even an explosion created drama in Stratford and Perth County long before any actor set foot on a stage. Experience the railway heritage of Stratford, St. Marys and Listowel while hiking along former railway lines, learning about the interesting people who helped build the railway's strong hold and viewing some of the last, and best preserved railway buildings in Ontario.

January 2008 SMART Holiday Party 2007 was a huge success, and all of us enjoyed the talented performances, tasty food, lively music, great dancing, and wonderful CD gifts. Many thanks to all who helped Class for out at the SMART Holiday Parents of Party 2007. Thanks to Bill Stinebaugh and Eggleston Services for the use of the