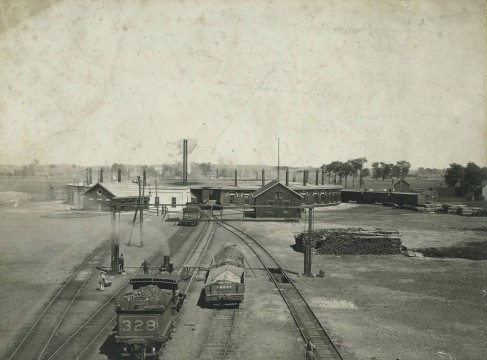 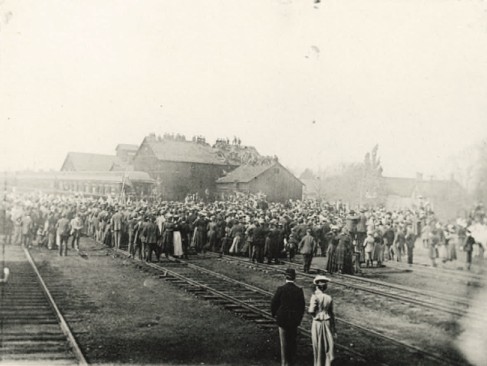 The Ties That Bound a County
Railway Heritage Tour of Perth County Railway rivalry, expansions and an even an explosion created drama in Stratford and Perth County long before any actor set foot on a stage. Experience the railway heritage of Stratford, St. Marys and Listowel while hiking along former railway lines, learning about the interesting people who helped build the railway's strong hold and viewing some of the last, and best preserved railway buildings in Ontario. Well into the 1850s, the earliest years of settlement in Perth County, the road systems were very poor. It is not surprising that railway rivalries beginning in 1849, saw the more prominently settled south end being courted by not one but two railways. Financial difficulties and bankruptcies led to railway mergers, resulting in the Grand Trunk Railway. The GTR and the Buffalo and Lake Huron Railway Company were the two railways vying to be first. Both of which arrived in Stratford in 1856. In turn, new stations were opened in the neighbouring villages of Shakespeare and Tavistock. Further railway expansions included the Grand Trunk extending the railway to St. Marys with lines to London and Sarnia by 1860 and the B&LHR extending their railway to Mitchell and Goderich by 1858. New stations also developed at Sebringville, Mitchell and Dublin. By 1877 a line had reached the north end of the county at Listowel, resulting in the merger of the Stratford and Lake Huron Railway Company and the Port Dover and Lake Huron Railway. They were taken over by the GTR in 1881. The GTR continued to gain strength in 1882 when difficult times for the Great Western Railway, the GTR's arch-rival, provided the opportunity to purchase. The GTR had a monopoly in railway service until 1902, when the Canadian Pacific Railway, through a number of subsidiary companies, tried to break the GTR's hold. The first line completed in 1907, made an east to west cut across the centre of the county through Millbank, Milverton and Monkton, in addition to a line from Linwood to Listowel. The other CPR affiliate was the St. Marys and Western Ontario Railway. Original plans to connect crucial links through Stratford had the proposed rail line run through the cherished parkland along the Avon River. The CPR gave up its struggle to connect the Perth County parts of its network when, after much opposition, its plan was defeated in a public referendum in Stratford. Without a connection through Stratford, the Listowel branch was closed in 1939. The GTR on the other hand, became one of the main components of the Canadian National Railway (CNR), the new government-owned Trans-Canada railway company in 1923.
The decline of the railway resulted in the growing popularity of the automobile as well as improved highway networks through the province. In 1970 CNR and CPR cancelled all passenger service with the exception of selected main lines. St. Marys and Stratford are fortunate to still have passenger service today through VIA Rail Canada. A similar trend in freight traffic saw the closure and removal of most railway lines in the county by the early 1990s. The first two to be built – the Grand Trunk mainline through Stratford and St. Marys and the Stratford-Goderich lines are still in existence today. The arrival of these first railways brought not only a revolutionary change in communication with the outside world, but along with the railway-related industry of the shops, the railways also allowed for easy shipments of goods to markets across North America and overseas. Perth County was one of the leading areas in Canada for the dairy industry for well over a century, as well as Stratford, with its ten or more furniture factories, producing approximately one-sixth of all the furniture in the country. 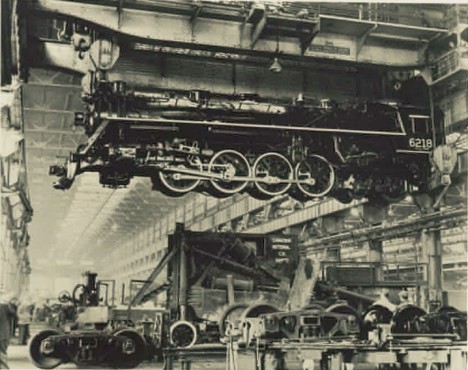 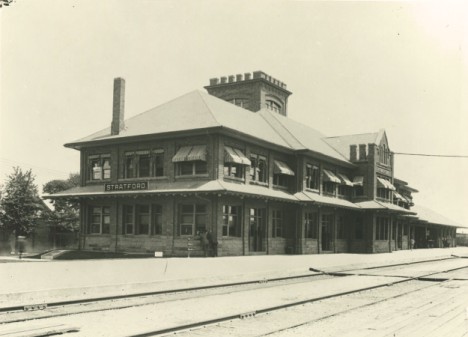 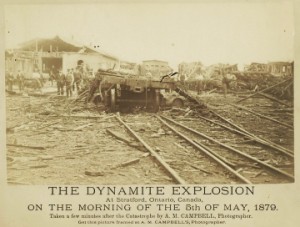 In the late 1860s the city of Toronto ordered the Grand Trunk to get its workshops off the harbor front, and for a while every small city and town in southern Ontario was trying to get the shops to relocate there. The man who had to make the decision was the railway's manager of locomotive maintenance, Herbert Roberts.
Stratford's then-mayor, T.M. Daly, invited Roberts for dinner. Roberts met Daly's attractive daughter. It was love at first sight and within weeks there was no chance that the shops would be anywhere but in Stratford.
It was that decision by the Grand Trunk Railway in 1870 which turned Stratford almost overnight from a country village into the trade-training centre of the province at a time when government run technical colleges were still unknown. The 1,000 employees the railway brought to Stratford were craftsmen skilled in almost every technical trade that then existed. Apprentices trained in the shops spilled over into other industries and formed the nucleus of craftsmen in a furniture industry that competed on national and international markets. Stratford had the best designed public, commercial and residential buildings in Southern Ontario, the designers of which were all by-products of the Grand Trunk shops. Start at the corner of Downie & St. Patrick Streets with the heritage sign A Community and a Workplace, located in front of the YMCA building. Behind the YMCA, you will see what remains of the railway shops.
1. A Community and a Workplace, heritage sign
Cross Downie Street and turn right. Travel to Shakespeare Street to the heritage sign - Stratford's Railway History.
2. Stratford Railway Station - 101 Shakespeare Street.
The Stratford Railway Station was built in 1913 by the Grand Trunk Railway. The GTR chose to build this two-storey station in the "prairie style" - an architectural form of the time popularized by American architect Frank Lloyd Wright. The brick and stone building has characteristic long horizontal lines, hip roof with wide overhanging eaves and is without ornamentation. The original Station garden was considered to be the finest landscaping on any GTR property. Three royal trains made stops in Stratford. The Prince of Wales (later King Edward VII) in September 1860, King George VI and Queen Elizabeth in 1939 and Queen Elizabeth II with Prince Phillip in 1959.
A note of interest: In 1879 a shipment of vigor powder (powder taken from nitroglycerin) exploded resulting in the death of two workers and the devastation of the railway yards. Improperly labelled, to avoid certain regulations, the dynamite en route from Montreal to Windsor, leaked over the tracks and was detonated when the train's wheels ran over it. The explosion was so intense, many houses in the area sustained damages and a shipment of straw hats in an adjoining car was found scattered half a mile away. Travel north on Waterloo Street to Douro Street. Turn right. 3. 27-29 Douro Street
Originally in charge of the GTR's drafting room in Montreal, John Davis Barnett was the master mechanic at the Stratford repair shops from 1880 to 1884. In a term lasting a little more than ten years, Barnett returned to Stratford to supervise the GTR's expansion operation in 1888. In addition to the railway, Barnett had a passion for books. In 1896 as president and a driving force behind the Grand Trunk's employee library, Barnett had 785 baths installed when workers complained of being too dirty at the end of their workday to use the library. His personal library consisting of 40,000 volumes, 1,500 of which 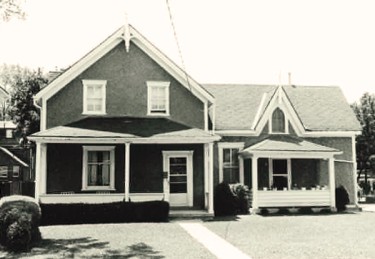 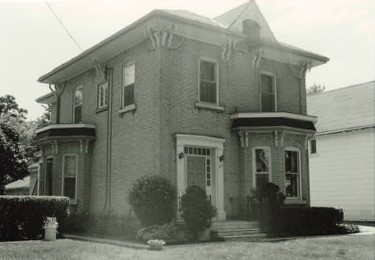 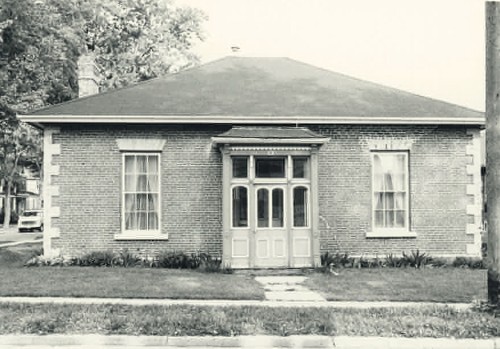 (ht p:/ www.brazil.org.uk) 04.Complete the following sentence with the option which BRAZIL'S YOUTH IN POVERTY ESCAPE reflects the text point of view It´s true to affirm that . About half of the young people from the Brazilian town a) 8% of Britain´s territory has been left after the Industrial of Gonzaga move abroad in the hope of securing a better