Australasian Journal of Dermatology (2001) 42, 207–210
Subcutaneous fat necrosis of the newborn following hypothermia and complicated by pain and hypercalcaemia Todd P Wiadrowski and Gillian Marshman
Flinders Medical Centre, Bedford Park, South Australia, Australia history of the condition is for resolution without scarring. Themost common complication of SCFN is hypercalcaemia, which has been associated with neonatal death.2 We describe A female infant was delivered at term with compli- a child with an overlapping clinical presentation following cations of severe meconium aspiration and birth medically induced hypothermia to treat birth asphyxia. In this asphyxia. Surface cooling was performed in the first case, the initial clinical features of cold panniculitis progressed 24 hours as part of the management of her birth to those of SCFN, both clinically and histologically. This asphyxia. Woody erythema was noted at 24 hours, patient's case was further complicated by pain and hypercal- followed by the formation of red–purple nodules on the 6th day. Clinical findings in the first 24 hours were sug-gestive of cold panniculitis. However, clinical and his- CASE REPORT
tological findings progressed to be in keeping with thediagnosis of subcutaneous fat necrosis of the newborn A female infant was born at term weighing 4350 g. Standard (SCFN). Furthermore, the immediate postnatal period maternal prenatal screens revealed no significant abnormal- was complicated by pain resistant to treatment with ities (haemoglobin, group and screen, glucose tolerance test, opiates. Asymptomatic hypercalcaemia was noted on rubella serology, syphilis serology, hepatitis B surface anti- periodic testing at 7 weeks and treated by rehydration, gen, hepatitis C serology, HIV serology and midstream urine diuretics, prednisolone, etidronate and a low-calcium specimen). The mother was noted to have mild hypertension and -vitamin D diet. A review of the clinical and histo- with associated oedema and albuminuria in the third logical findings of the relevant panniculitides occurring trimester. No medications were taken during the pregnancy.
in the postnatal period is presented, as well as a review Table 1 details the significant events after delivery and over of the treatment of hypercalcaemia in SCFN.
the ensuing months. During the first 24 hours, the child was Key words: cold panniculitis, corticosteroids, etidro-
noted to be hypotensive with cardiogenic shock requiring nate, infants, opiates, panniculitis.
dopamine, had a pneumothorax, acute renal failure and amild disseminated intravascular coagulation. Within the firsthours of life, a decision was made for paralysis and sedation,with her core temperature kept between 32 and 33°C to treat her birth asphyxia. Hypothermia was achieved with the useof ice packs applied to the skin and turning off the overhead Subcutaneous fat necrosis of the newborn (SCFN) is a transi- heating lamps. Her temperature was monitored via a rectal ent panniculitis of neonates typically presenting within the probe. This temperature was held for 24 hours, then raised first 6 weeks of life. Most reported cases involve infants at full to 35°C and then 37°C over a 3 day period.
term or post-dates and of normal size for dates, but often with Approximately 24 hours post-delivery, a pink woody oede- a history of birth asphyxia, meconium aspiration, cyanosis, matous change was noted on the infant's thighs and back, as seizures and hypothermia. An association with maternal well as petechiae on the right ankle. This progressively wors- diabetes and pre-eclampsia has been reported.1 The natural ened over the ensuing 4 days and the buttocks were noted tobe exquisitely tender to touch with grimacing and shrill cry.
Plaques and nodules formed within these backgroundchanges at 6 days of age. A clinical diagnosis of SCFN was Correspondence: Dr G Marshman, Dermatology Unit, Department made (Fig. 1).
of Internal Medicine, Flinders Medical Centre, Flinders Drive, Bedford Histology revealed an acute panniculitis with frank fat Park, SA 5042, Australia.
necrosis and needle-like clefts (Fig. 2), which confirmed the Todd P Wiadrowski, BM, BS. Gillian Marshman, FACD.
Submitted 12 September 2000; accepted 6 February 2001.
clinical diagnosis of SCFN. 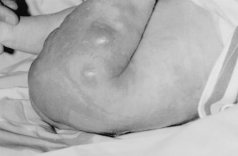 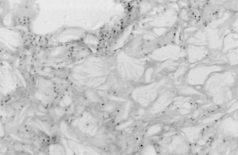 Microsoft word - treatment of patients who decline transfusion of blood components and or blood products.doc