Stem and Root Anatomy and Functions. Vegetative Propagation What are root's functions?
The three universal functions of all roots are anchorage, absorption and translocation of water with
dissolved mineral nutrients. In many perennial and biennial species, roots are also sites for food
storage. These food reserves keep the plant alive through the non-growing season, and are used to
resume growth in spring or after cutting or grazing. Some species that store food in their roots are
yams, alfalfa and red clover. Food storage organs of some vegetables (carrots, beets, and radishes) are
actually a combination of root and stem tissues.
Types of root systems
There are two major types of root systems: fibrous and taproot (left). Grasses have fibrousroot system. Their roots are adventitious, arising from the lowest nodes of the stems.
Species with a fibrous system are more shallowly rooted than plants with a persistenttaproot. Most dicots have a taproot system. The taproot originates from the primary root (radicle) of the seed. The taproot may have many branches originating from it. Roots of legumesmay also have root nodules, which are sites for .
Zones of the root
A root can be divided into the mature zone, zone of maturation, zone of cell elongation,
and the zone of cell division (the apical meristem) protected by the root cap (right).
All of the root cells originate from the divisions of the cells of the apical meristem. These
cells are small, thin-walled, and contain large nuclei. Root meristem is protected by a
root cap. The root cap is a dynamic, multifunctioning organ. For many years it was
believed that the root cap functioned solely to protect the apical meristem of the root.
Recently, it was shown that the cells of root cap percieve both light and gravity. Root
caps of both dicots and monocots produce large numbers of metabolically active root
"border" cells, which are programmed to separate from the root into the surrounding soil.
In soil, border cells play important roles in protecting the roots from the soil-borne
diseases (Hawes et al, 1998).
What are the root tissues?
The primary root tissues are the epidermis, the outermost layer of cells covering the root surface, the
cortex that surrounds the stele, and the vascular tissue or stele, which occupies a central position.
http://www.hcs.ohio-state.edu/hcs200/Stems.html (1 of 2) [10/08/2001 09:57:00 a.m.]

Stem and Root Anatomy and Functions. Vegetative Propagation The root epidermis (1 on the cross-sections below) is usually a single cell layer that
protects the root. The cells of epidermis can elongate to produce root hairs. These root
hairs have larger surface area and are more efficient in absorbing water. Root hairs are
also the sites of
http://www.hcs.ohio-state.edu/hcs200/Stems.html (2 of 2) [10/08/2001 09:57:00 a.m.] 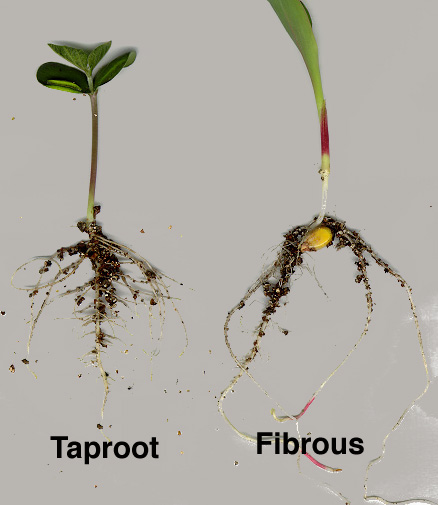