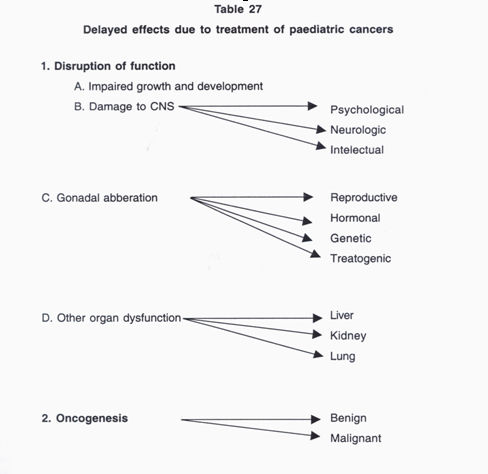 survivors in period 1. In periods 2 and 3 survival rates Our experience with limited number of nasopharyngeal improved and in period 3 the philosophy of radical cancer is that they remained local and loco-regional. surgery for "expendable bones" (like the fibula) was Systemic spread was not seen and 54.5% survived 3 adopted. This reduced the tumour burden and better years. Yolk sac tumours were extensive (Stage III/IV) results were seen with chemotherapy. Hence, three-year survival figure of 44.4% in period 3. Soft tissue uncontrollable with chemotherapy. Different results sarcomas (STS) consists of a malignant tumour presumably originating in the primitive mesenchymal Dysgerminomas gave good results with radiation tissue and exhibiting no rhabdomyoblastic differen- therapy. No chemotherapy was used in the treatment of tiation formed a definite entity when compared to rhabdomyosarcoma. Abdominal rhabdomyosarcomas did poorly as almost all the tumours were inadequately Langerhan-cell-histiocytosis gave mixed results. As debulked, resulting in a large tumour burden. There classically stated, eosinophilic granuloma was treated were no 5 year survival in this group. CNS extension with surgical 'scooping' followed by low dose radiation has been reported as a complication in head and neck therapy which gave 100% survival. Low dose radiation rhabdomyosarcomas, none were seen in this series; therapy had a definite place in the management of however their presentation is late. 26% five year sur- 'punched out' areas in bone with 100% local control. vival was seen in this group. It is reported to be more than 60% in those children who receive optimal treat- Although cure is being achieved for a sizeable number ment18. Our results are way below the best figures given, of children with multimodal therapy, late effects from in view of the late presentation and lack team these treatment have been identified in a significant number of long term survivors. Children withstand all forms of treatment remarkably well; however the late Osteogenic sarcoma was one other tumour that had effects will manifest when the child matures. Hence, dismal survival figures in our series - 43.3% three year observation of late effects has been documented in this survival in period 3. Patients who survived were those series 5 years after being pronounced cured. Table 27 consented to amputation/disarticulation as these cases outlines the possible delayed effects. had extensive tumours. Presentation was late because all were treated by Ayurvedic practitioners. 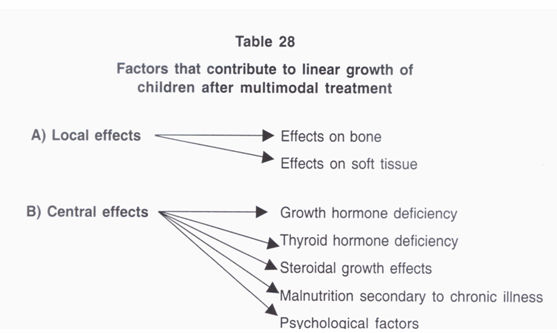 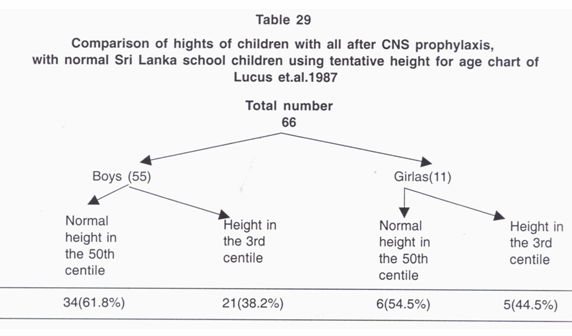 Linear growth is an important aspect in the growth and normal counterparts19. It has been suggested that lower development of a child; two factors contribute to this height in ALL children was present at diagnosis20 or (Table 28). Sixty six children cured of ALL have been consequence of disease. This is consistent with a recent compared with normal children using Sri Lankan study documenting an abnormality in endocrine function height/weight chart18a (Table 29). 21 (38.2%) boys and 5 as a manifestation of ALL21. Cranial irradiation of doses (44.5%) girls had growth retardation possibly due to 2400cGy to children less than 10 years shows an IQ of effects of cranial irradiation. Pituitary hormone studies 85 to 99 - a drop of 10 to 11 points22. A proportion of were not done due lack of facilities. Neuropsychological ALL children in this series above 6 years who had this effects have been studied in children who have had dose of radiation showed inability to compete and was cranial prophylaxis and interesting results have been inactive at school. A comparison of cranial irradiation observed (Table 30). A significant proportion of doses of 1800cGy versus 2400cGy has shown normal children over 6 years of age (90%) did not attend growth rate and IQ with 1800cGy and not with the school, the primary cause being that they were not able latter23. Higher doses of radiation to the brain show to compete with the normal children and 65% of significant neurological and mental disturbances24. 20 to children in this group were not active in school. It is 30% of medulloblastomas receiving higher dose of possible that this is a direct effect of the radiation radiation showed CNS disturbances with up to 50% of therapy given. Recent investigations have revealed that them needing special educational institutions25. children treated for ALL were significantly smaller than

Toward a new gold standard for early safety: automated temperature-controlled herg test on the patchliner®