Do not overlook the humble white
A healthy gut biome has a fungal component that button mushroom
generates a reserve of our own beta-glucans, fungal enzymes and neurotransmitters and is a vital A 2009 case control component not only of digestion but of health and study of 2,018 Chinese resilience. As usual, nature oﬀers us the best examples women correlated a of symbiosis at work and when we have a dysfunctional large decrease of the process at work in our bodies, we can sometimes learn from similar interactions taking place elsewhere cancer in women who in the ecosystem. Hence, if the human biome is consumed mushrooms. producing insuﬃcient enzymes of a certain type we can work on ourselves to restore 64% reduction in the that biome, but we can also ﬁnd remediation Turkey Tail Tincture cancer compared to the by introducing similar control group. Those who combined a mushroom materials derived from diet with daily green tea consumption reduced their similar fungal / bacterial risk of breast cancer by almost 90%. processes elsewhere.
Fungi ought to cover The humble white button mushroom, Agaricus practically every surface bisporus, is full of therapeutic potential. It has been on earth. They are the found to contain signiﬁcant amounts of lovastatin unseen mediators of food which supports cholesterol regulation, and eating chains, breaking down and re-distributing that which mushrooms is not associated with the range of has been built up, and creating beneﬁcial relationships side eﬀects commonly reported by those who take with biological partners across the plant and animal synthetic statins. White buttons also contain gamma kingdom assisted by helpful bacteria. We interact -aminobutyric acid (GABA). Regulating muscle with them biologically at a very profound level and I tone and inhibiting over excitation in the CNS, this believe that by studying their roles in nature, we can compound also helps to smooth out the pain response grow to understand their role within ourselves. We and improves relaxation.
too are nature.
Button mushrooms should not be consumed regularly References:
when raw as they contain the carcinogen agaritine. It is Chen D., Tsai C., Hsieh Y., Wang L., Mau J., Lovastatin and not completely destroyed by heating but is reasonably Gamma-aminobutyric acid Content in Mushrooms, 2004, National Chung Hsing University, Taiwan.
well denatured. Because white button mushrooms are Collopy PD., Royse DJ., Characterization of phytase activ- saprobes, i.e. part of the great army of composters in ity from cultivated edible mushrooms and their production our world, they have evolved a range of enzymes that substrates, Journal of Agricultural Food Chemistry, 2004, enable them to digest their food. They are a good source of phytases and proteases and therefore ideal Powell M., Medicinal Mushrooms, a Clinical Guide, 2015, for grain and seed allergy suﬀerers. Fungal proteases Mycology Press.
Stamets P., Mycelium Running, 2004, Ten Speed Press may also be a part of the regulatory mechanism that Stamets P., Mycomedicinals – An Informational Treatise on keeps the balance between fungi and bacteria in our Mushrooms, pp 13-19, 1999, Mycomedia.
gut. As a wheat allergy suﬀerer myself, I have found Zhang M., Huang J., Xie X., Holman C., Dietary intakes of this mushroom to be very useful. mushrooms and green tea combine to reduce the risk of breast cancer in Chinese women, International Journal of Cancer, vol. 124 issue 6: 1404-08.
Fred Gillam, as the young son of a head gardener on a Animals and fungi share a common genetic country estate, developed an interest in edible and medicinal ancestry (2.8 billion years ago) and there are some plants from an early age and he was already a keen mushroom similarities in biochemistry between them. Fungi forager at the age of 14. even synthesize Vitamin D2 in their skins from ergosterol, much as we synthesise D3 from the After a career lecturing in and practising horticul- similar compound, cholesterol. ture, forestry and conservation, his interest in herb- 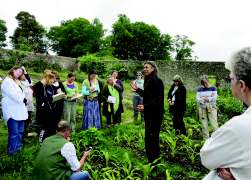 alism deepened and he undertook a 3-year herbal Fred's business, The Wild Side of Life, (http://www.
apprenticeship with Sarah Head at the Springﬁeld thewildsideoﬂife.co.uk/) is responsible for organis- ing the UK Medicinal Mushroom Conference (see Fred regularly appears on local and national radio Diary Dates for more information) and for run- talking about wild food and hedgerow medicine. He ning herbal medicine wildcrafting weekends and presented a series of three lectures to the Bath Royal food foraging courses that come recommended by Literary and Scientiﬁc Institution on ethnobotani- BBC Countryﬁle Magazine. He is the author of cal topics and with his partner he runs a voluntary Poisonous Plants in Great Britain.
herbal dispensary for a community of friends, family and villagers in Wiltshire. Herbal First Aid for the Home with 7Song and Director of Holistic Medicine at the Ithaca held as a two-day Free Clinic which 7Song wholeheartedly champions… Free Medicine. He has also taught 11th and 12th at and directed The Northeast School of Botanical Medicine for 13 years. Court, Dorset, a rural earthy setting If you were unfortunate not to attend this event perfect for a herbal do check out 7Song's website for very useful information and a calendar of events and training Herbal First Aid programs at www.7song.com course was organised by the UK forager Also check out Robin Harford's website for details of upcoming courses, or to sign up to The two days were his newsletter https://www.eatweeds.co.uk or packed with herb walks, lively humour and real hands-on Herbal wisdom from 7Song in the first aid sector. 7Song's unique approach to teaching left us hungry for more, and yet knowing we had digested a delicious meal of knowledge that we would take home with us and be able to use. 7Song is an internationally respected herbalist who rarely visits the UK so this was a quickly booked event. 7Song has been studying plants and their medicine for over 20 years which included his deep love for botany from his roots in Long Island, NY. His herbal education led him to the California School of Herbal Studies with Rosemary Gladstar in 1983 and later the Southwest School of Botanical Medicine with Michael Moore in 1994 & 95.
7Song teaches at many schools and conferences throughout the US. He is a herbal practitioner